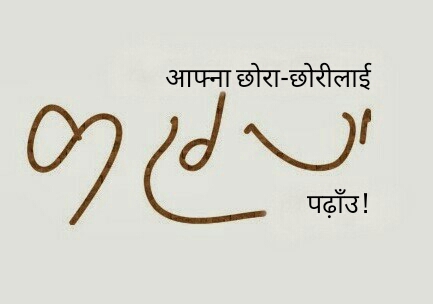 ❝Language is the road map of a culture. It tells you where its people come from and where they are going." - RM Brown

Who in the world would speak like that, you’d ask. Well, an entire generation, believe me.

When I came to Delhi for my undergraduate studies, there were very few of us from back home. So much so that all the students from Darjeeling and Sikkim studying in the north and south campuses and JNU knew each other! Call centers and jobs that liberalization later brought did not exist then. The few who had settled here were first generation Darjeelingays in Delhi – like my aunt and her friends who went to JNU and found government and banking jobs in the city.

My cousin was born here when I was in my first year of college. I watched her grow and struggle with the pain of dealing with two languages – Hindi and Nepali. She spoke Nepali, but with a liberal smattering of Hindi words. Other cousins back home thought her language was weird. You need to realize that this was the pre-Chhota Bheem era, when our own kids back home were not exposed to Hindi. Anyway, now my cousin is a young lady, and has significantly improved her Nepali language skills, although she still carries an accent.

My own daughter was born here. The day we heard a fellow Darjeelingay’s seven-year-old speak to her parents in Hindi, we swore to speak to our child exclusively in Nepali. Adoption of Hindi as a first language was not going to happen in our household! We would cock a snook at anybody who even remotely suggested that Hindi would later come in handy for competitive exams. (Gimme a break, the kid’s not even in kindergarten!) Hindi was promptly banned and Hindi-speaking characters like Chhota Bheem, Doremon, and Nobita were banished forever.

It helped that we had a nanny from Nepal. We didn’t mind that our toddler’s vocabulary included somewhat alien words like “kagati”, “jhyal”, “dhoka” and “kausi” or sentences like “suruwal ma pwaal parecha – her description of torn jeans”. At least she was still speaking Nepali. Later, the departure of her nanny and the introduction of YouTube and an iPad at age two completely displaced Nepali as her primary language. It became English with – believe it or not – a proper British accent, thanks to all the CBeebies programs she grew up on. Today, as a seven-year-old, she is slowly going back to Nepali – we’ve even brought the same nanny back to help her out.

Unfortunately, not everybody takes the pain to preserve our language. I have been to enough pahadey gatherings in Delhi and heard – forget children – even adults speak to each other in Hindi. Ugh! One of my relative’s sons speak only Hindi; they don’t utter a word of Nepali. Sadly, their parents seem to have internalized this. And they are not alone. There is an entire generation growing up without knowing their mother tongue. It takes no rocket science to deduce that the generation after will be completely bereft of any knowledge of Nepali.

If at all the language survives, it will be in a kind of pidgin form.

Be the first to comment on "Losing my language"