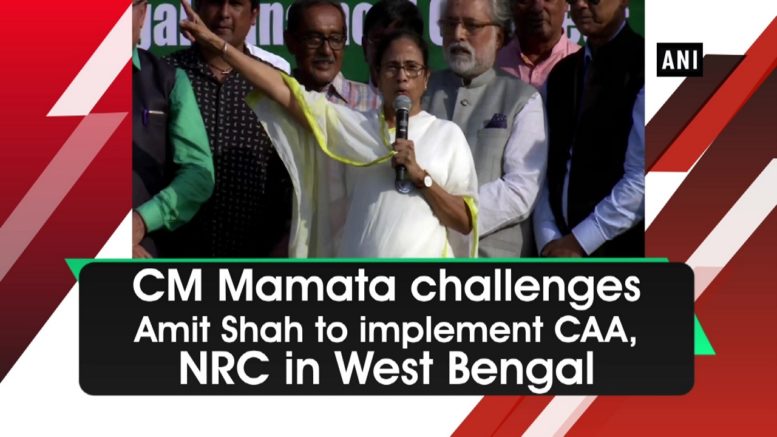 
“Dissent is a safety valve for democracy. If this safety valve is not allowed to function then the pressure cooker will burst said Justice D.Y. Chandrachud as a part of a three-judge bench headed by Chief Justice Dipak Misra who was hearing a case regarding the arrest of 5 human right activists in Mumbai. India’s constitutional democracy is predicated on the people’s right to call state power to account. Right to dissent is, therefore, the cornerstone of Democracy. Protests strengthen representative democracy.

Amidst the chaos surrounding the passage of the CAA by the Center and the decision taken by the Bengal Government to protest tooth and nail to stop the implementation of National Population Register ( NPR) and NCR in West Bengal, a question naturally arises in every curious mind viz; Can a state government do such a thing?

Is the state government constitutionally allowed to boycott a Central Act passed by the Union Parliament which represents the collective will of the people?

What are the legal consequences if the State government decides to go rogue and boycott such an Act?

Are there any legal provisions in our constitution for such a misadventure?

As always, leaving the politics aside I will try, to the best of my understanding, to decipher the constitutional provisions relating to such a direct act of dissent by the state government and its legal consequences. Please be advised that the views expressed are purely personal without prejudice to any political ideology or the likes. I stand to be corrected in case of any erroneous act of omission or commission on my behalf.

Let’s get our first question answered.

Can the state government directly boycott an Act passed by the Union Parliament? The answer to this question lies in Article 256.

Article 256 under the heading “Obligation of States and the Union” reads, – “The executive power of every State shall be so exercised as to ensure compliance with the laws made by Parliament and any existing laws which apply in that State, and the executive power of the Union shall extend to the giving of such directions to a State as may appear to the Government of India to be necessary for that purpose”

A simple read of the above article gives us the answer. The article is more or less self-explanatory. It says that the state has No Option but to extend compliance with the laws made by the Union Parliament. The Union Government, on the other hand, is, however, empowered by the same article to give such directions to the state as it deems fit to get those laws executed.

Therefore the State Government has to comply with the laws passed by the Central Legislature, it cannot say NO. If it decides not to do so then it will be deemed unconstitutional in accordance with the provisions of Article 256 which explicitly forbids such misadventures.

Now let’s take a look at the second Question.

What is the legal consequence of such a misadventure?

The constitutional sanction behind such a direct act of dissent by the state government is very harsh. For us to get a better understanding we need to again take a look into 2 important articles of our constitution, viz Article 365 and Article 356.

In means that the If the state government fails to comply with or give effect to, any of the directions given by the Union government than the President can lawfully hold that a situation has arisen wherein the State Government cannot be carried on in accordance with the provisions of the constitution.

Article 356 under heading “Provisions in case of failure of constitutional machinery in State” reads – “If the President, on receipt of the report from the Governor of the State or otherwise, is satisfied that a situation has arisen in which the “government of the State cannot be carried on in accordance with the provisions of this Constitution”, the President may be Proclamation…….”

The article clearly says that if the President receives a report from the Governor or otherwise, meaning that the President need not wait for the Govorners Report, saying that the State Government cannot be carried in accordance with the provisions of this constitution then he can, through a proclamation, under Article 356, declare, what is called a President’s Rule in the state, however, such is subject to the approval of both the houses of the parliament.

It must be noted that both National Population Register (NPR) and National Register of Citizens (NRC) have a statutory backing, they are created under the Citizenship Act of 1955 which is a Central Act in the Union list and that the executive power of the Union extends to giving such directions to the state as it deems fit to ensure due compliance with such laws.

Therefore if a State Government decides not to give effect to NPR or NRC then such an act amounts to a violation of Article 256. An incidental consequence of the violation of Article 256, Article 365 and 356 kicks in, as a result of which Bengal may come under Presidents Rule. In this way, the Center may take the Bull by the horn and impose Presidents Rule in a State.

The question now is, can the State Government afford such a misadventure. Can Didi afford a Presidents Rule in her state at this critical juncture especially at a time when the State Assembly elections are just around the corner?

Indeed, dissent is the quintessential part of democracy and allows people to have their opinions and to voice those without fear of intimidation. The philosophy of dissent and democracy has also inspired our freedom movement and defines India’s constitutional democracy, which is predicated on the people’s right to call state power to account, albeit within the constitutional framework but at what cost?

Be the first to comment on "The Price of Dissent- Is Bengal Headed Towards Another President’s Rule?"