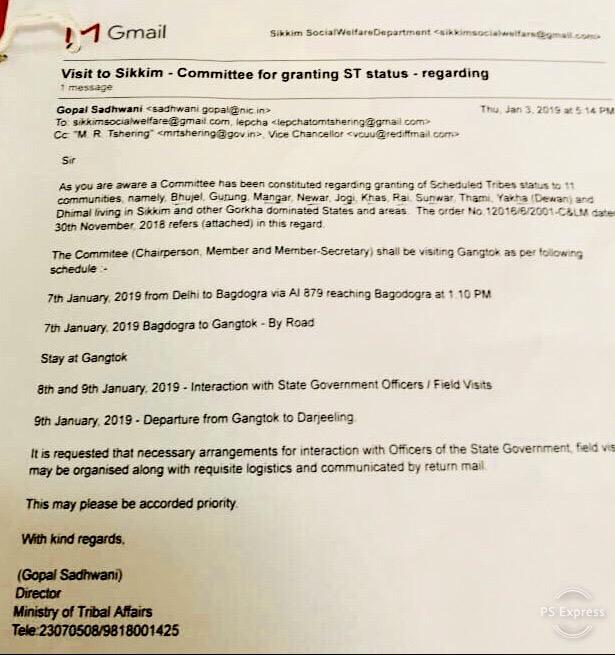 The Bharatiya Janata Party (BJP) has time and again lied to the Gorkha community, and Gorkhas across India will teach them an unforgettable lesson in 2019. This claim has been made by the current Gorkhaland Territorial Administration, Board of Administrators Chairman Binay Tamang.

In a strongly worded press statement, released yesterday, Binay Tamang has questioned the sincerity of intent on the part of BJP towards the Gorkha community, and has accused them of time and again lying to the Gorkhas, about including the 11 Gorkha communities as Schedule Tribes of India.

On Thursday the BJP MP of Darjeeling along with Lila Gurung and other Bimal Gurung’s camp had released video of Shri Jual Oram, Hon’ble Tribal Minister saying that the bill can be introduced any day in the upcoming winter session.

The tribal minister also says that the process for Sikkim and Darjeeling is completed and vaguely says bills are in different stages like some has gone for financial clearance, some gone in the cabinet and some in the drafting stage of the bill.

Lila Gurung had also given a quote to a leading English newspaper, The Statesman where he said that the bill for ST status for Gorkhas had been forwarded from the office of the Union Tribal Minister to union finance minister as it needs financial clearance and then it goes to cabinet clearance. He also said that he will know about the exact position of the bill only next day.

Some Gorkha advocate also mentioned in her social media page that the Bill will be brought to the parliament in this winter session and that she has got some information on this. Even yesterday a member of a NGO met the tribal minister in Delhi and was assured the bill to be brought in the winter session.

But today we expose the truth of the granting of ST Status for Gorkhas and what is the exact position of it.

We are releasing an official email from Gopal Sadhwani, Director, Ministry of Tribal Affairs which was sent on 3rd Jan 2019 at 5.14 pm to the Government of Sikkim where he has mentioned about the visit to Sikkim with the committee for granting ST Status. This is the same day Shri SS Alhuwalia along Lila Gurung of pro Bimal Gurung Camp had met the Tribal Minister and released a Video that the Bill can be brought any day in this winter session. This email exposes the truth while the Minister and the Bimal Gurung camp lies by saying that the bill can be brought anytime. The email proves that the committee has not even finished the process of collecting data regarding granting ST Status for the 11 Gorkha communities and the bill in the parliament is a long way to go.

How come the tribal minister does not mention about this official visit and he lies saying the process for Darjeeling and Sikkim is done.

The video was only meant to fool the Gorkhas once again because he says the process is complete and in within one hour a director from his own ministry sends a email to Govt of Sikkim for a visit.

In 2016 Vishnu Maini had visited Sikkim and Darjeeling had said the report would be submitted by December 2016.

The Union ministry of tribal affairs set up the committee under Ashok Pai, a joint secretary, in the first week of April 2016 to examine the proposal for these 11 communities in Bengal and other states.The committee was given three months to submit its report. But before Ashok Pai could examined the matter, he was transferred to the National Commission for Scheduled Tribes.

The panel – later reconstituted under another senior officer, Vishu Maini and she had visited Darjeeling on 11th November 2016 and during her speech she had said that the report of this committee will be placed by December 2016.

The other members who was present along with her was Shri B. Sasmal, Director, Ministry of Tribal Affairs, Kakoli Chakraborty, the deputy director, and Rabindra Das, a research assistant at the Anthropological Survey of India. They visited not only Darjeeling but Sitong, Latpanchar and Selphu in Kurseong subdivision.

Vishnu Maini while speaking in Gorkha Rangamanch Bhawan said: “We have collected a lot of information. The field visit is of much importance, to come to the site and see things. We have come across a lot of materials and need to study them now. We will submit the report by mid-December.”

Now the question is what is the necessity of a new committee with a new chairman to visit Sikkim after 2 years after the visit in 2016. The report for this committee is now pending for the last 2 and half years where in the original notification the committee says only report to be submitted in 3 months.

On 27th September we had exposed the double standard of the BJP where we exposed an official document whereby we had said the RGI rejected twice the recommendation of the West Bengal Government for granting of ST status to the Gorkhas.

We again exposed another important document on 14th December when we said that the bill for granting of ST status for the Gorkhas is not present in the current winter session.

Today again we have exposed the lies of the BJP and Bimal Gurung fraction.

I appeal to BJP and Bimal Gurung camp to stop lying and insulting us by thinking we are fools and that everything they say will be believe.

I reiterate our demand that we want ST status for the 11 Gorkha communities not only for Darjeeling and Sikkim but for the Gorkhas living in Assam, Delhi, Harayana, Uttarakhand and other Gorkha dominated places. The Tribal Minister in his last video only mentioned Darjeeling and Sikkim.

The BJP is the biggest traitor to the Gorkhas, leave alone Gorkhaland which they haven’t spoken a single word even after two MPs they couldn’t give ST Status to the 11 Gorkha communities which is in the MOU of the GTA agreement.

The BJP will do nothing for the hills and that they are only using Gorkhas has vote banks. The BJP didn’t utter a single word while we suffered for 105 days in the name of agitation under a directionless leader.

Gorkhas across India will give a befitting reply in 2019 to the BJP for letting the Gorkhas down in every aspect.” [sic]