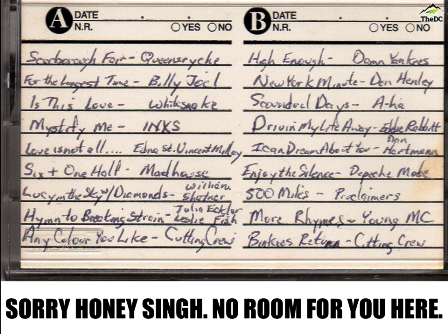 Do you remember dubbing songs? It used to be fun


Darjeeling has always been a Mecca of music, and those who were part of the “in” crowd back in the day had no problems in distinguishing between the Beatles and the Rolling Stones, or between Pink Floyd and Black Sabbath. But not everyone was a part of this “in” crowd, most like me were “out.”

Darjeeling is a very simple place where simple folks listen to some of the most amazing songs… and it has always been like that, and I am glad that our musical heritage continues to thrive. However, back in the late 1980s and early 1990s most of the music we listened to was Hindi movie songs, or Nepali songs – both “Adhunik” and “Lok Geet.”

English songs, however, were mostly confined to a privileged few. But then this one cassette came out, and it changed the music scenario in Darjeeling completely… but before I get to that particular cassette, let me set the context… Let me reminisce… Let me get a little nostalgic.

Prior to 1986, Darjeeling was thriving musically. Some of the most prominent musicians, lyricists, singers and artists who had exploded into the Nepali music world were ours to claim. From Amber Gurung to The Hillians, from Aruna Lama to Gopal Yonzon. Darjeeling was the heart of Nepali music and in a way, it was also responsible for a renaissance of sorts in Nepali literature. After all, the likes of literary greats Agam Singh Giri, Raj Narayan Pradhan, Indra Bahadur Rai were producing some of the finest work in Nepali literature, and all of them were from Darjeeling.

But the turbulent Gorkhaland Andolan from 1986-1988 stole our youth and innocence forever. While almost every sphere in Darjeeling suffered due to the Gorkhaland Andolan of 1986 – be it from society to politics, from literature to economics, none suffered more than our Music and Social scenario.

Our parents tell us that prior to the Andolan they would often go to watch night shows in the Rink Hall or the Capital Hall. They say there used to be a cinema hall in the Jalapahar Army Cantonment even and people would go walking at night to see the movies, without any fear of anyone. The Andolan changed it all.

Today, Darjeeling goes off to sleep at around 8 P.M, and sadly we don’t have any nightlife to speak of. All of that can be traced back to the fear of strangers generated during the Andolan days.

Similarly, the Rock & Roll and pure Rock scene set by amazing bands such as The Hillians, Extreme Moderation, Turquoise and Jade, The Diamonds, Prism, Forbidden Fruit, Magnum Opus, Pralay which turned Darjeeling into the Mecca of Rock in Asia, gave way to drug addicts and rowdies after the andolan.

But when you have music at heart, nothing can stop it from flowing out.

After the Andolan was over, bands like Magnum Opus, Rusty Nails, the US Band (where US is short for Unity of Souls) kept that rich musical tradition alive. Thanks to those great souls. Music is being celebrated again in Darjeeling.

But like all good in bad, and bad in good thingy, my introduction to English/Western music happened only because of the Gorkhaland Andolan of 1986.

Our village is in the outskirts of the town, but it flanks the main road, and so distant relatives from gaon-basti would come to live with us, as the town area was relatively more peaceful than gaon-basti due to the GNLF vs. CPIM civil war.

One such relative of ours was Rajen da, he was a rock star. He had come to live in our village right before The 40-Day Strike was declared. While people were busy saving up sustenance, Rajen da saved his most prized possessions – an electric guitar and an amplifier.

I still remember his arrival, like it had happened yesterday… He was as thin as a reed, he was so thin people lovingly called him Haddi Rajen; he was that thin. He would wear a pair of dingo boots (cowboy boots) and skin tight jeans – flash news for kids of 2017, that skin tight clothing stuff which you guys are so crazy about, had already happened back in 1950s, 1960s, 1970s, 1980s and in 1990s as well.

So try and imagine Rajen da: This super thin guy, must have been at least 6 feet tall, wearing dingo boots, skin tight jeans, jeans ko shirt, ra jeans koi sleeveless half jacket full of badges and patches of different band names, with shoulder length hair which he used to style in what was back then called “Wham style”… arriving to our village with an Electric Guitar and an Amplifier and nothing else.

When I think of him today, I can proudly say: He was a Rock God!!

That is how he arrived. With an electric guitar and a small amplifier in hands at the height of the Gorkhaland Andolan… Imagine…

I must have been 7 years old, and quickly went on to become Rajen da’s side kick. He would smoke beedi, but I’d never tell on him… As a reward he tried to teach me a few chords on his all-holy electric guitar.

He was a peculiar man. To keep us off of his guitar when he was not at home, he would tell us, “Don’t touch this, it’s dangerous. A dude died while performing some days ago after being electrocuted by his guitar…. “Asti ek jana manchhe electric guitar bajaunda current laagera stage mai moreyko thyo… Na chala hai!”. And he wouldn’t leave it at that he would say, “Mornu ta moryo ki, tara tyasto current laagda pani tyo manchhe le lead chai khelerai moryo. He did die, but to his credit he manged to complete his guitar solo before he checked out.” We never touched his guitar when he wasn’t around.

The 1st ever English song, I listened to and learnt to play, thanks to Rajen Da, was “Holiday” by Scorpions. Every Tom, Jack, Dick and Harry or rather every Tashi, Jantarey, Dhane or Hari from Darjeeling who grew up in the 1980s and 1990s knows this song “Holiday”… I don’t know why, but everyone knew this song, and it was also my 1st English song.

In Darjeeling honestly, there was a time, when if asked which one should be the Darjeeling anthem, only two songs would compete – ‘Holiday’ by Scorpions and ‘Hotel California’ by Eagles

But before I could learn more songs, the 40 day strike ended and Rajen Da left, just as he had arrived – Acchanak. I came back from school, and he wasn’t there in his room… neither was his guitar… I went to Ama and asked, “khai Rajen Da?” she replied, “Budi le bhagayo tyeslai”…. Apparently Rajen da had eloped with an older woman raichha…

With Rajen Da gone, we did not have access to English music. What we had instead was an amazing collection of Nepali, and Hindi songs and bhajans. To this day I know each and every lyrics of Anup Jalota’s Bhajan Sandhya.

But then one day, my elder brother brought home a cassette. It was a plain cassette and did not have any insignia to it… So I asked him “what is it?” he said, “Just listen first”…

That cassette was a turning point in every teenager’s life in Darjeeling. It was a mixed tape and one particular shop was dubbing these songs on a blank cassette and selling them. It had the following songs:

Imagine, I must have been around 8 or 9 years old, and my only window to English songs was “Holiday” taught by Rajen Da and getting to listen to, what I know today is some of the most classic numbers ever.

This cassette penetrated deep in Darjeeling. Almost every village, be it in the town area or the rural areas, had at least had 1 kid who was listening to this awesome mixed tape.

But listening did not mean we understood the lyrics… For the longest time, one of my friend kept on sining “Bappi Lahiri Soldar” instead of “Buffalo Soldiers” and a cousin of mine would dance gattee chhadera to the tune of “Jus Peeray” instead of “Just Beat It.”

I attribute to this cassette the resurgence of Rock music in Darjeeling – bands like Pralay, Cadenza, Divine Wreck, Damaged Brain, and much later bands like Reincarnation, Mary Jane, Grungy Morphins, and Mantra, must have listened to this tape or some version of it.

The 1990s were a turbulent time in music though, the whole rap song craze surprisingly didn’t touch us here in Darjeeling, and other than Baba Sehgal and Apache Indian there wasn’t a rapper of note in India.

In terms of Nepali rap, Girish and Pranil hold the honour of being the 1st Nepali rap artists, with their album “Meaningless Rap” back in 1992. But even their advent didn’t spark a rap frenzy in Darjeeling. We were the land of ROCK and we stayed true to it.

But sadly, the celebration of rock music did not last as long as it should have. Towards the 2nd half of 1990s boy bands had emerged in the scene – bands like All4One, MLTR, Boyzone were hitting the scene internationally, and in India.

Imagine growing up listening to “Paranoid” and “Stairway to Heaven” and then in your teen years having to put up with songs like “Paint My Love,” “Baby Can I Hold You” and other such crappy stuffs.

Sometimes I wish, I was born in 1960s so that I would be able to enjoy all the amazing songs of 60s and 70s, but then again I realize, I wouldn’t have met Rajen Da, or gotten a chance to become a part of that generation who re-discovered Rock Music in Darjeeling.

Keep rocking Darjeeling. That is what you do the best.