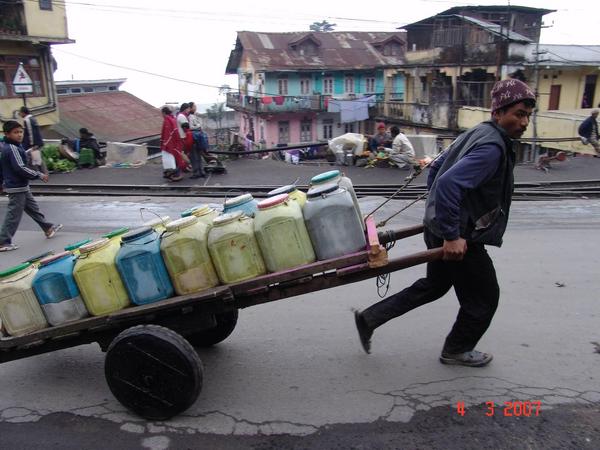 
Drinking water problem in Darjeeling has been a sore wound that has refused to heal for over two decades now. After re-elected for the second consecutive term, Prime Minister Narendra Modi power in the centre, the first ‘Maan ki Baat’ radio broadcast aired on June 7, where, in his address, the Prime Minister conveyed the message to the nation that every part of the nation must pay more attention to the current water crisis and water conservation options.

Water as we considered as life on the earth. Without water, it would be impossible to imagine human life as well as all creations. Total 71% of the earth covered by the water. Out of this 71%, 97 per cent water contains in the giant oceans which have a salty taste and not fit for drinking. Now remaining of 3% of 71%; which we can consider as a source of drinking water, 2.997% of water remains in solid form in the glaciers. Hence only 0.003% of water is drinkable or in the solid-state for consumption.

Unfortunately, now we have a bizarre form of drinking water crisis created by the various form of man-made pollution. Every part of our country struggles with water crisis every year. For the past few years, the Chennai metropolis has been struggling with a complex shortage of drinking water, which remains the same in this year also.

Due to the water crisis, farmers’ suicide, drought, the crisis of drinking water etc are the major issues which we witnessed every year.

According to the United Nations report on water conservation, within 2030, 40% of India’s population have to struggle for drinking water while by the year 2040 in most parts of Indian cities the problem of drinking water can get even worse than ever.

Darjeeling’s drinking water problem is not recent. Darjeeling’s water crisis, which has been steadily increasing over the past decade, is now taking a tumultuous year. The irony, however, is that the residents, as well as the concerned parties, are not taking alarming water crisis so deeply. Every year, in the dry season, there is a rush of drinking water, and then it all gets disappeared. Then next year, when water shortages occur, then again everyone gets their attention on water problems.

The source of drinking water for the town of Darjeeling, which has been distributed by the Darjeeling Municipality, is the Sinchel Lake, located in Ghoom-Jorebunglow region. The North Lake, located at Sinchel, was built in 1910 and the South-Lake in 1932, under the leadership of Thos Kenay, the first engineer (engineer) of the then Darjeeling Municipality. Darjeeling town has been getting drinking water from this pair of ponds at Senchel since February 28, 1932.

SEE ALSO:  Women in Darjeeling: Empowered, are we?
Powered by Inline Related Posts

Also, according to the report of the Darjeeling Municipality year of 2010, the third lake, constructed in 1978, Siddhap Lake also has a capacity of drinking about 1 million gallons. However, due to lack of proper reservoir and lack of proper management less than a half per cent of water been carried through this newly constructed water reservoirs.

Kang-Khola is also another source from which about 5,000 gallons of water been extracted to deal with shortages in the dry season.

In addition to this, the drinking water of Darjeeling town is provided by small natural reservoirs, around the city including the Rambi catchment area.

Also, to solve the drinking water problem for Darjeeling permanently, Balasan Project has been running as its foundation stone been laid in the year 2006. The Balasan project worth of billions of rupees been completed lately. Unfortunately, according to the statement made by PHE department officials stated that ‘under the Balansan project from Silchar Lake, approximately 1,750 meters, water needs to be pumped to reach in Darjeeling town. As a result, the department will have to incur an additional load of Rs. 10 million every year on electricity consumption’.

In another word, the Balasan project seems to have failed in one way and could not solve Darjeeling’s drinking water problem at the end. At the same time, it is understood that even after spending billions of rupees it has not provided a concrete solution of the hills.

Later on, recent year only, local administration GTA submitted a proposal to the state’s chief minister for a project that could cost around Rs. 750 Crore, including the Detail Project Report (DPR), keeping given the drinking water problem in Darjeeling, Kurseong and Kalimpong. Under this project it has been proposed that about 107 km of pipeline from Siri-Khola would arrange to draw water to the town of Darjeeling, which is estimated to cost around Rs. 105 Crore (for Darjeeling only).

At present, the Darjeeling Municipality has begun laying new and advanced quality of pipelines in all areas of the municipality. Its main purpose is to stop the tradition of connecting illegal water lines in the main pipelines, repairing old pipelines, and supplying water to every municipal ward under collective management.

Given the current drinking water crisis in the city of Darjeeling, I would like to put a few suggestions along with the major factors been observed behind the water crisis of the hills: