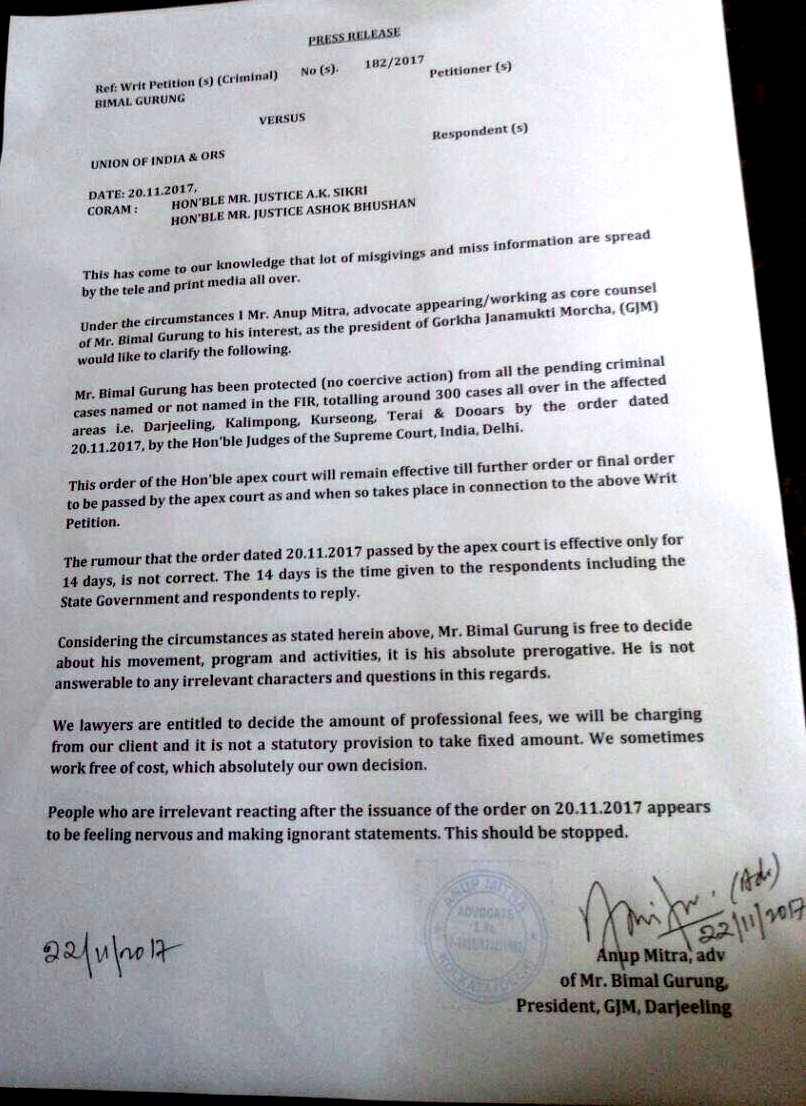 The Supreme Court Order issued on 20th of November, 2017 which reads, “Issue notice, returnable in two weeks. In the meantime, no coercive steps shall be taken against the petitioner,” has sent shockwaves through the hill political circles. People are reacting to the verdict in varied ways, depending on which side their political affiliations and loyalties lie.

Immediately following the news first broken by TheDC, we received numerous queries, including by journalists from Darjeeling region.

Among the very many messages we received after the news was first published here, the following stood out. It has been reproduced as it was sent to us, without any editing [including non-correction of grammatical errors] on our part.

“A senior Supreme Court Lawyer said that the “there is no bar by the Hon’ble Court to stop investigation under chapter 12 of CrPC which includes power of arrest by the police. Coercive step doesn’t include arrest which is part of investigation”.

The senior police officials in Nabana on Monday is hoping that he comes out of hiding believing that he would not be arrested. as it would make their job easier” [sic].

The above message was followed by a note, “Check this fact“…

So we did. We spoke to lawyers from Supreme Court, and here is what we found out.

Clarification regarding what “coercive steps” meant, had till September 2017 relied on the ‘Harkesh Meena vs State Of Rajasthan‘ judgment issued on 22 December, 2011 by the Hon’ble Rajasthan High Court.

The judgment read, “Effecting arrest of an accused in any cognizable offence does not amount to coercive step. The investigating officer is free to arrest the accused, submit the charge etc. but he is not permitted to do manhandling and abusing the accused.”

Citing this, one of the key members from Binay Tamang’s team who refused to be named, told us, “It is good if Bimal Gurung comes out, he will be arrested the moment he does.”

Adv. Siddhesh Kotwal a lawyer at the Supreme Court however disagrees. He explained, “Meena judgment is actually outdated, it related to one specific case. What is relevant is the Punit judgment issued in September 2017.

“For future while interpreting judgment of Harkesh Meena, this Court deems it appropriate to lay down the law that if any order regarding the no coercive steps has been passed by this Court, the same shall mean that the petitioner shall not be arrested by the investigating officer without taking appropriate prior consent of this Court. Thus, until the consent of the Court if so granted to make the arrest, the prosecution shall not be entitled to arrest the person if he has been granted the order of no coercive step.

Since, this order has to have a prospective meaning therefore, any act committed by the investigating agency under the belief that Harkesh Meena entitled them to make arrest on or before 04.09.2017 then the same shall not be within the purview of flouting the earlier orders. However, in future, the present order shall be strictly maintained unless reversed by some superior Court. No coercive steps order shall in all the matters pending and in all the matters to be filed, henceforth, shall mean, (9 of 9) [APPLR-515/2017] ‘the petitioner shall not be arrested‘” [sic]

Mr. Anup Mitra, counsel for Bimal Gurung today released a press statement. It read, “Mr. Bimal Gurung has been protected (no coercive action) from all the pending criminal cases named or not named in the FIR, totaling around 300 cases all over in the affected areas i.e, Darjeeling, Kalimpong, Kurseong, Terai and Dooars by the order dated 20.11.2017, y the Hon’ble judges of the Supreme Court, India, Delhi.”

It further reads, “The rumor that the order dated 20.11.2017 passed by the apex court is effective only for 14 days, is not correct. The 14 days is the time given to the respondents including the State Government and respondents to reply.”

Agreeing with the above observation, Mr. Siddhesh Kotwal says, “the Hon’ble SC has ordered for affidavits to be filed by both the sides in 14 days time, which means Mr. Gurung cannot be arrested, there is a blanket ban imposed by the Hon’ble SC on taking any ‘coercive steps’ – any  arrests or detention. So unless the Hon’ble Supreme Court decides otherwise, the ban on arresting or detaining Mr. Bimal Gurung will prevail even past the 14 days given to both the parties to respond via an affidavit”

Ms. Reena Rai, a lawyer at the Supreme Court clarifies, “‘No coercive steps’ has been ordered by the Hon’ble Supreme Court which becomes the law of the land under Article 141 of the Constitution. Further, unless any such order is passed by the Hon’ble SC, the police cannot arrest the petitioner [in this case Bimal Gurung], or without the express consent of this superior Court.”

Mr. Siddhesh Kotwal says, “this is why, it is advisable to the government concerned [of West Bengal] not to mount attempt at arresting Bimal Gurung, because any such attempt will amount to the contempt to the court, and Supreme Court of India does not take it lightly when their orders are not followed in letter and spirit.”

1 Comment on "The Curious Case of “No Coercive Steps Shall be Taken” – Can Bimal Gurung be Arrested?"