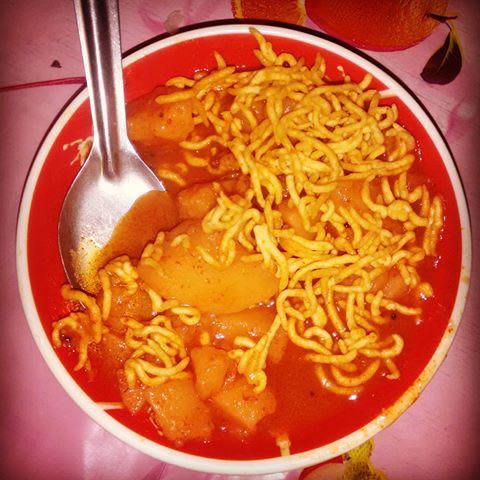 At the moment, I am living in that part of the world where in every street or corner you can find puri, “ghuguni” and puffed rice. So if you are hungry and you need something to munch real quick, you have these options on the go. This thing clicked my mind when one of my friends casually asked me, “tum logo k udhar kya milta hai aise khaane ko?” I could have said momos straight away, but wait. Momos aren’t still omnipresent.

I very briefly scanned across numerous edibles, and then quite confidently said ‘Aludum.’

It must have been a very strange thing for him to hear it and his reply was “Kya? Tum log aalu khaatey ho baahar mein?” The fact that you get aalu at every nook and corner in Darjeeling must have been as strange to him as it was to me when I first came to know that puri was actually called “luchee” here.

The thing got over there. But it somehow wasn’t over for me. I started to calculate and trace the root and relationship of an average Darjeelingay with aludum. The relationship is old, like since the time I started I started eating food. But then, to me as a child, aludum was just another potato dish, and potato was the only vegetable I liked. I started gaining the commercial understanding when I started going to school.

Munna aunty would bring her bucket full of aludum and sell alu bhuja for 1 rupee per poka (a unit of measurement for anything sold in papers). I still couldn’t accept the fact that people would buy aludum with their money instead of macha mithai, anda mithai, ghurra mithai and any other mithai muna aunty sold. So aludum still for me was something me or my friends would buy if they bought only rice or rotis for their lunch, and we had money specifically provided to buy aludum.

Sometimes, I would visit the town with my mom, and we would pass through Bhola’s shop. A small wooden shop, which had gone “koltey” and looked like it would fall any second. My mom would always stop by to have a few pokas of aalu (bhola too served in newspapers back then) with tittiri, while I would have no interest at all. I would instead try relentlessly to get the Phantom cigarette candies. The place would mostly have more than a few people and its since that time that I have known bhola ko aalu.

I left my nursery school eventually to join my high school. Meanwhile, Munna aunty had doubled the rate of her aludum to match the market price. My new school, where I went on to spend 7 good years of my life, also had 2 or 3 alu stalls outside it, and the price remained constantly at 2 rupees per “pela” till I left.

Now I slowly started to realise the importance of aludum. A big portion of the students survived on aludum solely as their lunch complemented by buns and “tara bhuja”.

Slowly, I started going out with my friends and by now my interests had also started shifting from toffees and candies. Aludum slowly became something I would have outside and something that I would also like in taste. Though, its girls who are always seeking a place selling aludum, we guys too would have moments where we would say “aalu khaidinu parcha hola haw aaju”.

Since the time, I have been witnessing the delicacy evolve, and there is always something new that comes out. My farthest memory takes me to the place where they would only sell aalu bhuja or aalu mama. Bhola has his unbeatable recipe of aalu bhuja with tittiri and that Badi above his shop had hot “dalley ko acchar” to go with her aalu.
Everything in and around aludum would stay within that boundary.

Slowly, Bhola’s “koltey” wooden shop was replaced by a building, where bhola acquired a nice and proper shop, where you could sit and eat. Gradually, new players started entering the market with their own improvised recipes. One such player was Anand Da, just ahead and opposite of Benis, and he put before people a very new form of aludum, adding bhuja, mama, potato chips and fried maize (makai) to the normal aalu. This was a big challenge in front of the conventional recipe. The aalu with chips had barely settled in the market, when aalu mimi started gaining a lot of attention. Every aludum shop would now have cartons of mimi. Noticing the tremendous success in aalu mimi, Anand Da started experimenting with almost everything, and now at his shop you can have alu mixed with any kind of crunchy thing you get in packets – cheese balls, lays, and the list goes long. There is one of his special items infact, where he mixes all those together to serve with aalu.

Even though so much of innovation and improvisation has occurred, there are still places where you get the humble aaludum in its simplest form with a little bhuja over it. One such place is that “bich gully ko chep ko dokan”, where they serve delicious alu wit “til ko acchar”. They also have sel rotis, if you want to feel the awesome combo of it and aludum.
And for the last part, for us living away from home, when we need to cook for ourselves, and we see some potatoes on the rack, we are atleast sure that we are having something good to eat.
And then I think, if anyone outside of us would know these things would be known to the wonders the simple “aalu” could do.

They would know the satisfaction in holding a bowl of “aalu” when cooked at home even before the meal was served, and having additional bowls even after the meal. Even now if someone asks me “Tum log k udhar aalu milta hai bahar khaaneko?”, I wouldn’t be able to explain everything of it in a plain and simple answer.

I would just smile and nod in affirmation. Yes

1 Comment on "Everyday Darjeeling: For the Love of Aludum"