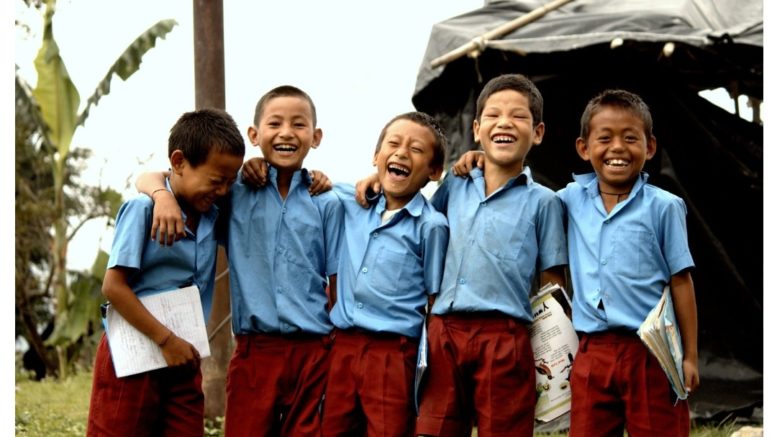 Today, the trend is to send children to “international schools” with “affordable world-class facilities” because of your chances of doing well in life increases. The education mafia has taken over the system and turned schools into a profitable business model.

At the same time, there are schools in remote places that are run by a single teacher as well. Villagers themselves help to make sure the teacher stays in the village and their children are educated. The biggest irony, however, is that the same people who have studied in a reputed private school system will fight to the death for a government teacher post.

As the saying goes  “You are lucky and life is set if you are a permanent govt teacher”. While chasing the safety of government jobs, many don’t realize the harm they are causing to the students. Being a teacher is a responsible job as you are in charge of setting foundations for many lives.

Recently, I paid a visit to one of my school friends who was now a school teacher in one of Darjeeling’s remote village. Among friends, he was always the most popular, a well-known drummer of our time, talented, and good-look guy. He attended the best of schools, went to good colleges, had a good paying job, and lived his life to the fullest.

A man of such ‘rock and roll’ attitude was now was a teacher in a remote village came as a big surprise to me. As it turns out, he quit his previous job and was now working as a teacher in the village school.

SEE ALSO:  The Revolution and The Leader, Who?
Powered by Inline Related Posts

As an active DDO (Duli Dulai Officer), I couldn’t resist his invitation and started the journey through some of the bumpiest roads in Darjeeling. But with the ‘Hum Jayega’ like the spirit of the drivers, any journey in Darjeeling is guaranteed to be fun.

We stopped 10 to 15 km short from the destination because the vehicle could not pass through the landslide. There was a narrow strip stable enough for us to walk. Perhaps the social media and local newspapers were yet to hear the news.

Finally, we reached the beautiful village, not discovered by the tourists yet, but sadly neglected by the government as well. The total ambiance of the village was beautiful; the fragrance of the firewood, of cowsheds and milk, of local wines and beer, of smoked beef and pork, of raspberry and wildflowers. The warm water from the kettle had the aroma of firewood. I loved the happy attention I received from the people around who were just happy to see a new face in the village.

The place looked beautiful because it was abandoned by the usual tourist that we are used to and sadly, also by the government of the constituency.

We woke up to a bright sunny morning the next day. Having met after a long time over a leisurely breakfast made sure that we were late for school.

While on the way I was worried because he was late but he kept on saying, “We don t have any Principal, since I’m the only permanent one, I think I am the Principal”. As we were approaching the school, I could see two distorted huts; one with a roof and another with a tarpaulin as a roof and a wall. This was explained to me by my friend- that the storm last week had affected the school as it was quite an old hut made of rusted roofs, decayed wood, and mud as a floor? The parents of the same students had made quite an effort to come together and fix it. I could hear some cows mooing nearby, pigs were tied in ropes, goats, and chicken all over their tiny playground. I could hear a few murmurs of the students but the loudest was of a man and his followers.

SEE ALSO:  The Deusi Story - It Started From The Magar Army
Powered by Inline Related Posts

The teacher’s topic for the day was the States of India and its capital. “BIHAR – PATNA. SIKKIM- GANGTOK. ASSAM – DISPUR. HIMACHAL PRADESH – PANAJI” they shouted.

I looked at my friend as soon as I heard that, he looked back and shrugged off his shoulders. Later, I was introduced with the teacher, he was very humble and a gentleman who called me “sir” too. My friend told me he was 10 pass and was hired as a temporary teacher past few years. We had a chance to interact in his off time, he told me everything about the village, students and himself so much that he even told me his salary. It was 1200 monthly. He received after every three months and sometimes late.

The students, parents and even those temporary teachers had immense respect for the permanent teacher. Amongst all the melancholy of the school, teachers, parents and their situation. The students were always having a gala time; studying, complaining, playing, reading, running, laughing, writing, fighting and the best time for them was a mid-day meal and a play time after.

Before their midday meal started, they were sent outside the class for they needed to memorize something and it was during that time, that I had a chance to talk to them and take their photographs. They were quite shy and nervous at first. I had heard their famous tale of “Dallae Khorsani”. While taking the pictures I asked them about the fight over “Dallae Khorsani” (round chilly). The real reason for the fight of the students over Dallae was that every time they would get confused as to which one their Dallae is. Because when they can’t eat the whole in one day, they will save the other half for the next day in between the wooden planks of their classroom and during the next meal, they’d be confused as to which one is whose.

It was then they burst in laughter and started being comfortable with the camera but the only good picture was of that outburst of sudden laughter. The picture still gives me the hope in my darkest days, it reminds me of good times with my friend who passed away, it still makes me intoxicated with their stories and too many innocent faces.

No matter what the struggles in life, it makes me feel contented, I am so glad that I have met them and there is the existence of hot chilly like Dallae Khorsani to forget all pain, at least for a while.

SUBASH GHISING: The Man, The Legacy, The Legend

Be the first to comment on "Dallae Khorsani – The story"

OTHER THAN THIS NOTIFICATION? "Henceforth all of