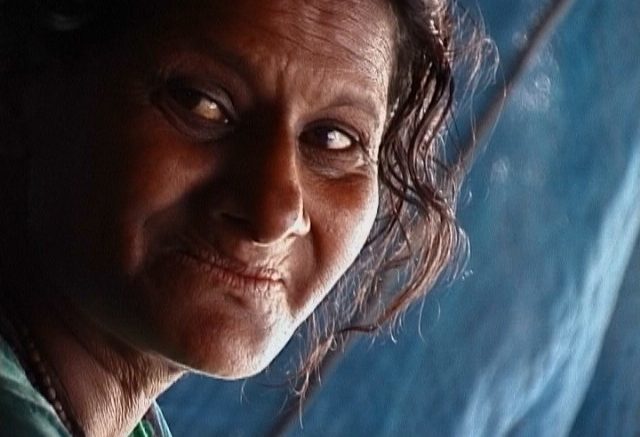 
Sorrow of A Woman by Yumita Rai*

First time I saw her
Running down with gay abandon,
The narrow and squalid alleys of Kopilmoni, Dhaka in Bangladesh.
Clad in a knee length parrot blue Bomkai saree,
Her feet bare,
Cracked severely on the heels.
Displaying her tobacco stained teeth.

An unusual carefree childlike smile,
Ever on her countenance.
Her frizzy hair
Graying slightly on the sides,
In complete disarray.
With a stout stick always in her hand,
Spanking everyone,
Who comes across her way.
Young and older,
Poor and rich,
Laymen and statesmen alike.
Confiscating money from their pockets.

” She is Masi Gurudasi Mondol” informs Raman, our host.
To a group gathered to watch documentary films at Rachna.
As the films rolls on
We see more of Masi in all her eccentricity.
A painful cry of a constable in blue uniform
Caught unawares with stinging cane
Sends us into peals of laughter.

The more we see her
The more we begin to like her.
Like her
As she is so unlike us,
Uninhibited, carefree,happy and seemingly liberated.
Yes liberated
Ubshackled from all her worldly ties.
But as PB Shelley had said:
” Our sincerest laughter with some pain is fraught,”
Behind Masi’s glittering eyes,
Her carefree laughter,
We perceive sorrow,
Deep sorrow
Sorrow of a woman,
A woman who has witnessed
Her home burnt down to ashes,
Her husband, a victim of manslaughter,
The pang and helplessness of a mother
Whose children killed in front of her eyes,
In 1971 Bangladesh Liberation War.

This thirty minutes movie
Left me shaken completely to the core,
Exhumed the long  buried pain and scar,
Reminded me of my own narrow and slippery footpaths,
Of once beautiful and lush tea gardens.
Steep and winding roads of the hills,
Dingy and choked alleys of Chowk Bazar,
Infact every nook and corners
Of the laidback Darjeeling Hills,
Which have witnessed
Many a Kaili Boju and Subbeni Bhauju
Walk in trance,
A mere scarecrow
Looking out

For their spouses,
Taken forcibly away to be beaten to death.
Whose helpless cries still resounds the Hall of Bhanu Bhawan.
For their teenage sons
Away in some nearby woods
Taking a refuge
Or some even retaliating with their Khaduwa.
For their daughters
Whose chastity violated in the Amawasya Nights of 1980s.

I see a Gurudasi Mondol
In many a mother who has lost a son,
To the mindless violence,
In the name of a Bigger Cause.
The horror of the agitation
Etched indelibly in their memories,
A scar that will never heal.
These mothers have hung onto life,
Some barely clinging to sanity
But a few have lost
The battle that raged in their minds,
And have become
Shadows of their former selves.

But a question looms large before us,
Whether it is a small hill town
Or a city
Or a country
Who would understand
Sorrow of A woman !

*Yumita Rai is a teacher and a poet. Her poem “Sorrow of a Woman” is second in the Gorkhaland Andolan Series: Her first poem “Legacy of a Rowdy” can be read here

Those who are not aware of Gurudasi Mondol here is a short background to her story – Gurudasi Mondol resigned herself to madness in 1971 when, during the Liberation War of Bangladesh, she witnessed the murder of her entire family at the hands of the collaborators of the occupying forces. Today Gurudasi continues to roam the streets of Kopilmoni, a small town in rural Bangladesh, in pursuit of all she has lost; snatching at will from the pockets of strangers and breaking into spaces normally reserved for men, taking liberties only her madness and her strength of character afford her. In her beloved home of Kipilmoni, Gurudasi has now attained near legendary status and, through her indomitable presence, she has kept the spirit of the Liberation War alive.

Here is the link to her story