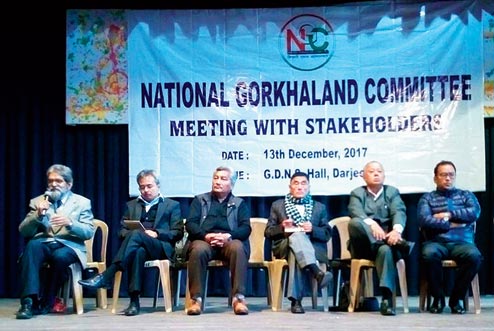 Hello NGC, here’s our assessment of you and you have not done well.

? NATIONAL GORKHALAND COMMITTEE – NGC was formed far outside Gorkhaland area somewhere in Delhi with representation from a group of people who nominated themselves – they are Gorkhas indeed but what have they done for Gorkhaland up until now? Interestingly, they’ve only had good careers, so when none of them has never worked for Gorkhaland issues, how do we trust them with the gorkhaland demand?

? NGC has said they will not contest elections & hence by saying so have garnered support from hill parties. we thinks NGC did not want to pose as a threat to political parties and have succeeded in doing so. but since Gorkhaland is a political solution, how will you bring about that by being apolitical thus? you have managed to look and come across as important, managed to please the parties but what will you do for the people? just intimidate them with your sterling presence?

? NGC calls itself a think tank and aptly so. It did not condemn GTA – 2, ok let’s say we forgive you for that, maybe you did not want to meddle in Binay-Anit politics but where were you when IC Soumijit Roy made rape threats to Gorkha women? why was there no condemnation from the NGC? why wasn’t there meetings at the ministry of home affairs for that? will the ‘think’ tank only think & not ‘do’ anything? how are you of any help when you cannot and do not voice our issues – hence we reiterate again, you cannot solve political issues of Gorkaland by being a pretentious apolitical think tank.

?  By the looks of your meetings in constitution club, New Delhi, NGC seemed more like a platform for academic debates on the Gorkhaland issue – which we think is a good thing. Just the reason why you should have named yourselves a little modestly remaining true to what you would be ‘realistically’ contributing. Maybe it could’ve been ‘All India Gorkha Retired and Retiring Professional’ – what was the need for raising expectations with name ‘National Gorkhaland Committee’ and being of no national use to us?

?  Ok, let us indulge you a little with this point – if you are the all encompassing NGC – what are your rules for inclusion? why aren’t there enough women representatives? why aren’t known names from the Darjeeling hills, those who have been working relentlessly for the Gorkhaland demand not on your list? where are the real thought leaders? (because you are supposed to be a think tank… remember?)

So, like we mentioned at the beginning, you have failed us already (5/100)

Please do us a favor and do not try to fool us with your mumbo/jumbo. Kindly stick to solutions that make holistic sense regarding Gorkhaland. We’ve seen the carnival from a vantage point. You can pose as the great National Committee but we are seeing the jesters and opportunists in you. Hence, quit the farce. There’s real work to be done.