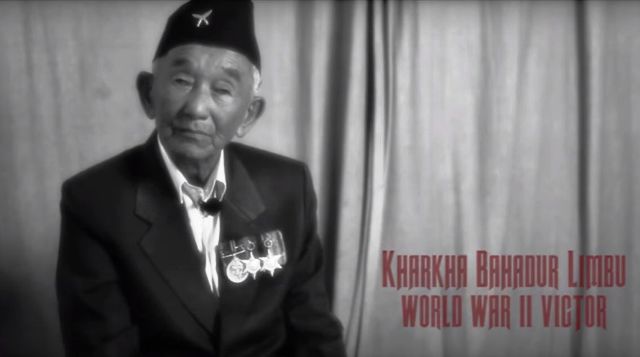 
World War veteran, Kharka Bahadur Limbu from Dungra Busty, Kalimpong narrates his story and recruitment into the British army. Recalling how he was drafted into the army and his training. He was one of the 32 member drop party who were dispatched to fight in Europe immediately their training. They landed in Tripoli amidst heavy war after sailing continuously for 4 days and nights.

With subtitles in English, Limbu beautifully narrates his heroic adventures in Europe, the victories, losses, and his realisation of the futility of war. Kharka Limbu’s narration is a soldier’s journey that recounts the glorious history of the Gorkha platen and how they earned their reputation as one of World’s deadliest army. He speaks about the exploits of ‘Khukri’ during the war and how the Germans dreaded the weapon and the people carrying them. Mr Limbu was fighting in Germany at the time Hitler was captured.

At the end Limbu laments why the government is sidelining the Gorkha community in India. He asks “why are we being so sidelined? We have shed bloods for India, our motherland. As members of the same family, we are only demanding constitutional solution for the protection of the Gorkha community. Tomorrow when there is another war, this same foolish loyal Gorkha will be on the frontline again.”

Satish Subba, grandson of Kharka Bahadur Limbu has documented his grandfather’s story in a book titled THE LAST SCROLLS. It is indeed an honour for us to know that a man so brave walked amongst us. Your efforts toward preserving our stories and documenting them is much appreciated and a legacy the our community needs to preserve.

You can purchase a copy of The Last Scrolls here.

2 Comments on "The Man from Gorkhaland: Story of War Veteran Kharka Bahadur Limbu"