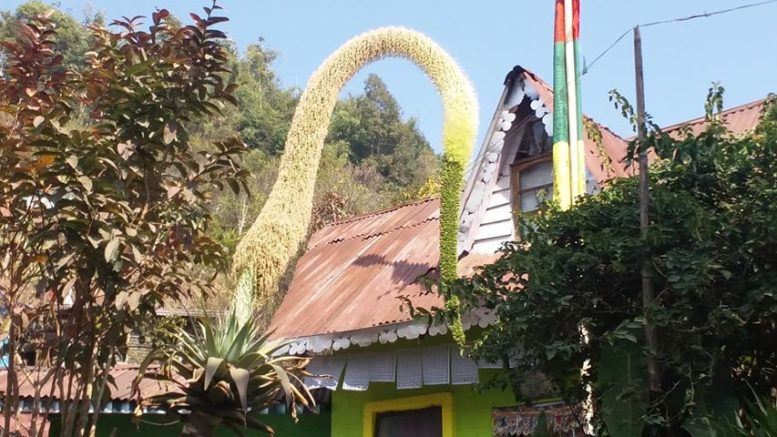 The house of Sukram Golay from Orange Villa, Bahadur Gown in Mangarjung which falls under Pokhrebong in Darjeeling sub-division is filled with curious people these days, many have travelled from far to see this rare Swan’s Neck, locally known as “Hatti Sudey” flower in bloom. Know as Swan’s neck, Lion’s tail, Fox tail across the world, and scientifically as Agave this plant finds its origination in Mexico. Multiple rosettes of large, sharply pointed, grey-green leaves emerge from a stem that often lies flat across the ground. As each rosette of leaves matures, usually after 4 to 5 years, an amazing floral spectacle emerges in the form a flower spike 3 metres or more tall. They are sometimes curved or bent like a swan’s neck, hence the common name. Each spike bears hundreds of individual flowers that are creamy-green in colour. Agave is one of the prettiest succulents. Its large rosettes are formed from soft, fleshy, thorn-free leaves of a light, mint-green hue. It lends a cool, tropical appearance to a garden and is often planted close to a swimming pool or alongside rustic garden steps or paths. The root system is shallow and small, but the plant is nevertheless able to cling firmly to the soil on a slope or to anchor itself easily between the roots of large trees. It blooms once, at the end of its lifetime, in the form of a very long stem covered in soft yellow flowers. The weight of the stem itself and the flowers it carries causes it to bend in a graceful arch towards the ground, which accounts for its common name swan’s neck. This species is a generous monocarpic plant that produces many runners (baby plants) at the base of its stem and is able to cover a large area relatively quickly.

Within the genus Agave, some of the species (such as A. americana and A. sisalana) that were planted in days gone by in parts of South Africa outdid themselves and now appear on the invasive vegetation list. They were imported from the arid regions of Mexico and tropical America (where the local population put agaves to a multitude of uses, from medicinal to functional to making tequila) and planted in the desert regions of the Karoo as fodder for cattle, and to prevent soil erosion, form secure hedges around cattle pens and provide nectar for honey production. These plants, while fairly harmless in desert landscapes, are practically indestructible and, when they escape to temperate and subtropical climates with high rainfall, they become a serious threat to the natural habitat and its biodiversity

If you are growing one of these, please be warned, they can turn into an invasive species if you are not careful.

Meanwhile, those of you who can, please do head to Mangarjung to enjoy this amazingly pretty flower and biodiversity of our region.

ANYONE UP FOR HANGING – Them Syndicates of Yore