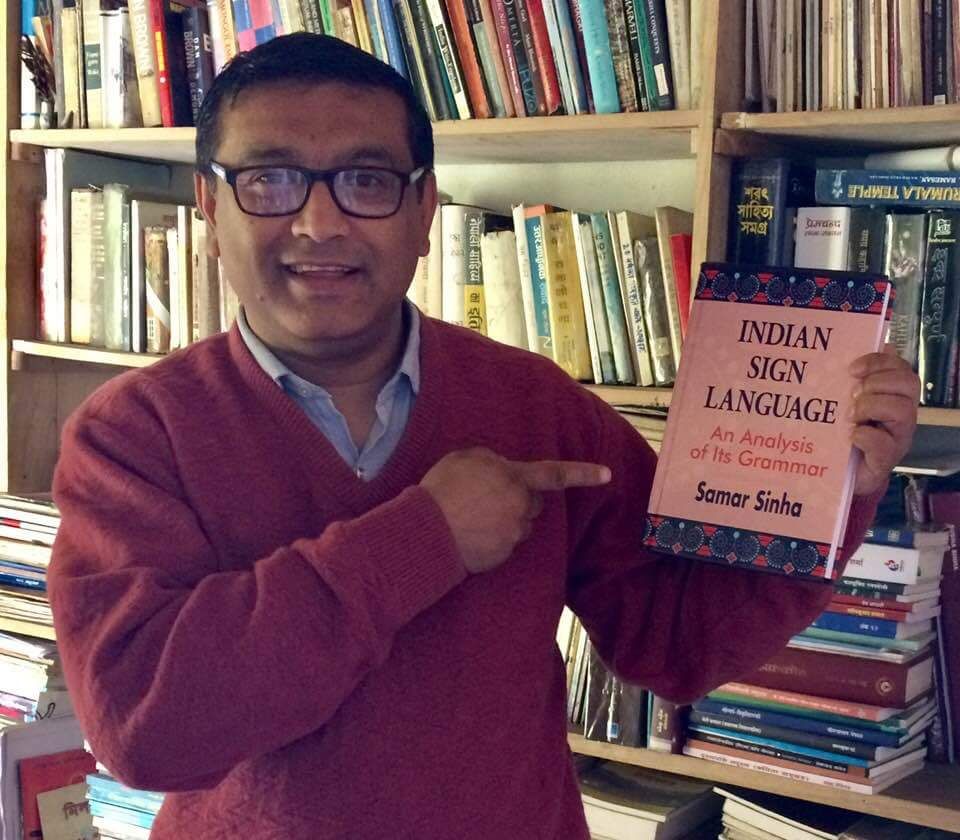 TheDC team takes pride in Gorkhas who have managed to carve a niche for themselves. Our sons and daughters have always excelled in many fields, and a field that we have always been proud of is academics. One such name that stands out in the field of academics is Dr. Samar Sinha. A well-known name in the field of academics and research, Dr. Sinha completed his schooling from Central School for Tibetans, Kalimpong and is a resident of Rangbull, Darjeeling.

Currently an Assistant Professor in the Department of Nepali, Sikkim University, Dr Sinha is also the coordinator of the Centre for Endangered Languages at the same university. Harbouring a keen interest in languages, Dr. Sinha has a Doctoral degree in Linguistics with a specialisation in signed linguistics and syntax from Jawaharlal Nehru University, New Delhi.

He is primarily interested in features (the atomic elements of linguistic structures) and their relation to architecture and modality in linguistic theory. Along with working on sign languages and Nepali language varieties, Dr Sinhacollaborates with speakers of endangered languages of the Himalayas to document and describe their languages and institutions, with researchers on the corpus and computational linguistics, and with writers on translation. He is the Assistant Treasurer at the Formal Studies in the Syntax and Semantics of Indian Languages (FOSSSIL) society.

TheDC sat down with Dr Sinha to gather some information about his latest book “Indian Sign Language: an analysis of its grammar” and the inspiration behind it.

TheDC: Tell us about your book and what it focuses on.

Dr. Sinha: My book is based on my PhD thesis that I did under the guidance of Prof. Ayesha Kidwai. It is pioneering research on the grammatical properties of Indian Sign Language (ISL), used by the members of the Deaf community in India. The book covers the analysis of various linguistic structures of ISL in detail. Besides, it is supplemented with illustrative descriptions, as well as by comparative and theoretical analyses. The book also includes a description of the Indian Deaf community and highlights the need for greater awareness regarding ISL. More importantly, the book adds to the growing understanding of natural human languages in general and ISL in particular. It also contributes to the empowerment of the Deaf community in India. This book can also be used as a resource for teaching, development of pedagogical resources and for further linguistic research.

TheDC: Is this the first book you’ve written?

Dr. Sinha: Yes, as a solo writer this is the first book I have written; but I have two other books to my credit that have been jointly edited and one that has been jointly written.

TheDC: What generated your interest in linguistics?

Dr. Sinha: In my school days, grammar was my interest. After my Class 12 exams, I read a book on the history of the English language which sparked an interest in me to pursue linguistics. I thought of taking linguistics in college but unfortunately, it was not provided as a subject in the colleges nearby so I studied English Honours in Darjeeling Govt. College and proceeded with Linguistics in my Masters. I also read one of the oldest grammars of Lepcha language by Lt. GB Mainwaring which inspired me to take up linguistics as well. Initially, I wanted to work on Lepcha language; but still, it is my wish to be fulfilled.

The DC: Do you plan on writing more?

Dr Sinha: As I am in the field of academics, it is generally expected that I will write more. It is a part and parcel of the field that I am in. Right now, I don’t really have anything particular in mind about writing a book but I will definitely write something more on sign languages, as well as on areas that interest me especially on Nepali spoken in India, and endangered languages of the Himalayas Yes, I have few draft articles to meet their deadlines — as always.

The DC: Please tell us about your other works too

The DC: Is there anything else you’re working on currently?

Dr. Sinha: I’m working on the Nepali language particularly spoken in Sikkim and Darjeeling. I’ve come up with some articles and conference presentations, but I am yet to come out in a major way. Currently, I am also writing one such major article on Darjeelinge Nepali (spoken in Darjeeling-Sikkim and Dooars)Also I am planning to write on the endangered languages of Darjeeling and Sikkim with my colleagues from the Centre

TheDC: Any words for youngsters who may want to follow on your footsteps?

Dr. Sinha: I would advise them to be hardworking, have lots of patience, be passionate about their vocation, be dedicated to it, and be responsible towards the greater community.

TheDC team congratulates him on his book and wishes him all the best in his future endeavours.

ON KARGIL VIJAY DIWAS: We Remember – The Undiluted Heroism of Col. Lalit Rai (VrC) and His 1/11 Gorkha Troops

Be the first to comment on "Dr. Samar Sinha – Author of the new book “Indian Sign Language: An Analysis of its Grammar”"