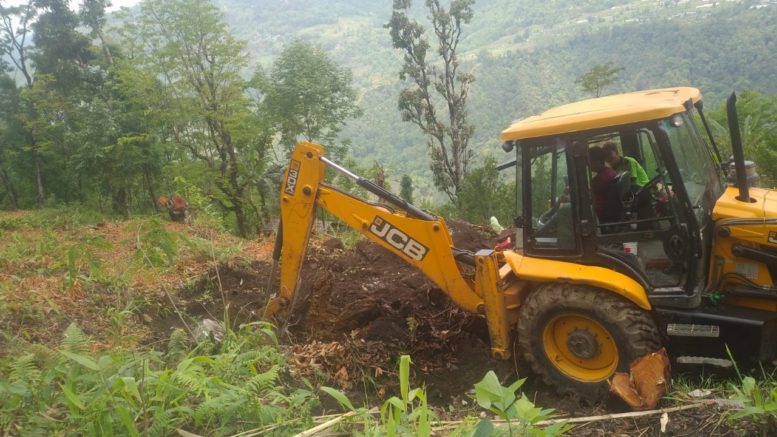 
One of our readers has written the following to highlight how J.C.B led politics could lead to environmental catastrophe and how the silence of the government/authorities in this whole sordid saga is alarming

“If one follows the current political status of hills, or is a social media enthusiast, every day or other one will see news of J.C.B. making some roads in some particular village, or some political party stating we have build roads and have so and such numbers of J.C.B. working round the clock.

Just, for enthusiasts who spend hours watching an activity as trivial as digging soil by J.C.B. it is actually named J.C. Bamford Excavators Ltd and is a British multinational corporation, named after the initials of the name of its founder Joseph Cyril Bamford.

The administration and the government, which in fact should be doing such development works is the happiest after the villagers, because why bother there are these social workers party which will reach and do the work which is prerogative of authorities.

Building roads, providing connectivity in the name of social work, well and good, but, come this monsoon, their unplanned act in the garb of socio-politics will bring chaos in the villages where the machine has run.

The already fragile Darjeeling and Kalimpong Himalayan region, under stress due to rising population will be more affected due to the unplanned activities of the political party. When a J.C.B. moves it will definitely put more stress on the land (above and below), it is causing deforestation and most importantly soil erosion, which will have catastrophic consequences for the people as it is destabilizing the entire belt.

The point is have they got the necessary N.O.C. from the authorities, do they have engineers who have plans in place for the use of the J.C.B. while building roads? Do they have Environmental Impact Assessment done? Do they have the plans for the most important thing while constructing roads: Drainage System? Are they prepared for the worst case scenario? The answer in all probability is NO

We have villages on hilltops, we have villages in the middle and we have villages at the bottom. Without a thought, just for the sake of garnering votes, some Foundation, “Our Party” or ” Their Party” is rampantly digging the soils of our hills. What if their rampant act of so called goodwill will bring an entire village situated on the top crashing down due to a landslide caused by their digging.

Unplanned acts of such use of J.C.B. should not be used by the learned, new age “Facebook Born Leaders” and also the age old cunning fox political parties, your acts of emotional blackmailing of the already emotional hill folks will have disastrous impact on the ecology.

Especially to the one new political party born after working for years under the mentorship of the Father of Gorkhas Lt. Shri Subash Ghishing, if you believe your song “Maya Nai Ta Ho” “Maya Nai Ta Ho” kindly think twice for the sake of our land!

Be the first to comment on "The Politics of J.C.B"