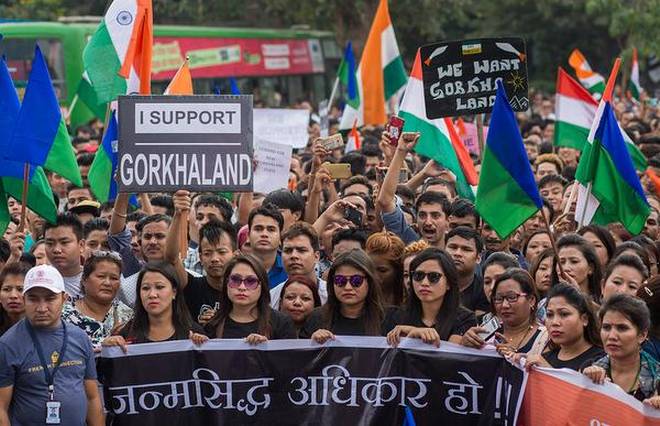 
The dream of Gorkhaland by embracing the need for ethnic and regional identity is the heartbeat of every Indian Nepali or Indian Gorkha.

It is very embarrassing and heart wrenching for me to get sarcastic remarks being an Indian Nepali or Gorkha in the rest part of Indian soul. Living away from the cold mountain air and friendly own community of the hill for Postgraduate and M.Phil. Studies did come across many times with such sarcastic remarks as Chinese because of having ‘Chimso’ eyes and “How Nepali language while living in Bengal!” considered as some bitter remarks are the inner pains of the Indian Gorkha who resides plains or rest part of Indian soil.

However, there might be many historical and other reasons behind the demand for Gorkhaland. Though, Indian Gorkha identity, linguistic and geographical identity is the most important from a personal perspective.

The demand for separate territory for Gorkhaland or Indian Gorkhas dates back many years. Giving this all a quick read, it seems we are pretty much in agreement. In 1907, for the first time, the demand for a separate state or territory was placed on the then Morley-Minto Reform Panel.

After India’s independence in 1952, the All-India Gorkha League demanded a separate state from Bengal before the then Prime Minister Pandit Jawaharlal Nehru. Daulat Das, president of the District Workers’ Union in 1955, also has a history of demanding separate territory before the State Reorganization Committee.

In 1981, the provincial council asked then-Prime Minister Indira Gandhi for a separate territory for the Indian Gorkhas.

In the late eighties, there was a violent Gorkhaland movement from 1986 to 1988; led by Subash Ghising, supremo of the Gorkha National Liberation Front; as a result, the Darjeeling Gorkha Hill Council (DGHC) was formed in 1988.

With the birth of the new party Gorkha Janamukti Morcha in the year 2007, a new beginning of the movement under the leadership of party president Shri Bimal Gurung took place, with a new principle of so called ‘Gandhism’ or ‘non-violence’. Though, the movement of Gorkhaland led by Shri Bimal Gurung stigmatized as more violent in the course of movement.

Within the long chapter of the above-mentioned agitated periods, the precious sacrifices and dedications made up by the Gorkhas especially local inhabitants of Darjeeling district, Kalimpong district and parts of terai regions, seems applauded. Unfortunately, our dream stands still unsettled.

However, providing the required infrastructure or resources for Gorkhaland is one of the most important aspects for our own community-upliftment and for years old demand. When we secure and strengthen the hill community and its resources then only, we will remain capable to enrich our identity and territory. Otherwise, after the formation of Gorkhaland, we cannot make best use of our own identity and separate land representative. And this is an indigestible but bitter truth.

Thereby, a brighter future will enable us to strengthen our hill resources.

There are two main aspects to strengthening our own resources – ‘human resources’ and ‘natural resources’. Let us try to make a brief attempt to observe the prominence of these two major resources in the current context of hills.

Education considered as a weapon to strengthen the human resources of the Darjeeling hills. Hill education is once considered a world-renowned educational destination. We have witnessed the golden era of Darjeeling hills till mid of 90s. However, the frequent directionless and lack of futurist Gorkhaland movement can be considered as a major factor in bringing hill education to the flip-side. The frequent movement has resulted in prolonged closure of hill educational institutions; political uncertainties etc. are considered as major factors. At the same time, declining educational standards in the hills with rapid commercialization of educational institutions, political interference for the appointment of teaching faculty and irresponsible negative conduct like nepotism seem to be working to bring down the standard of education in the hills.

Considering another perspective, the declining craze for higher education among the hill youth can also be considered as a wake-up call towards downgrading human resources. The mentality of comparing education as a means of earning money has flourished in our society which results; many young people flee to different parts of the country and foreign land for better earnings and livelihoods after completing their secondary education or higher secondary education.

Although behind every migration, there are many reasons and compulsions lie as no one wants to flee, but the uncertain future of the hills, mounting unemployment, lack of opportunities and the lack of approachable quality educational institutions are also factors behind it. There is not a single university in the hills at present (hopefully in near future we will have our own university in the hills). All the hill colleges are affiliated with the same university based in plain (Siliguri). As consequences, during the recent Gorkhaland movements, the hill students had to face unfair treatment or bias in the field of education (especially during undergraduate studies). Single digit awarded marks and low percentage of undergraduate level students during their respective exams; the pain ​​still lingers.

Last year, the global coronavirus pandemic has severely ruined the entire academic session. Those who may have acquired online education, but there is no doubt that, most of the students were unable to access online education and globally dropout rate will increase rapidly in near future as UNICEF studies predicted.

Technology and the Internet are now a boon for students in the field of education. But it’s undeniable that, negative impacts of mishandling of internet are even greater which severely deteriorates the studies of our youth and teenagers.

All the above are worms that are ruining human resources of the hills, which all we need to acknowledge on time as well as find collective solutions of it.

Therefore, towards empowering human resources, more and more administrative officers, officials in higher ranks and erudite minds are need of the hour for long pending demand of Gorkhaland. Because violence and emotional zeal will not only allow us to turn the dream of Gorkhaland come true. Now is the time to show the battle of intellectuality and the potential of human resources in the hills.

Now what steps can be taken to strengthen the human resources in the hills?

SEE ALSO:  THOSE WHO SHAPED OUR NATION: Sardar Vallabhbhai Patel and the Gorkhas
Powered by Inline Related Posts

B. The natural resources of the hill considered as another important asset. It is well known that many Gorkhaland movements have wreaked havoc on the hill’s natural resources. According to various studies it reveals, during the violent Gorkhaland movement of 1986, there was widespread destruction of hill forests, which has resulted in extensive degradation or impact on the biodiversity of the hills.  Movements at various times since then have caused extensive damage to the hill’s natural resources. During recent Gorkhaland movement, 100 days strike resulted widespread human encroachment into the interior part of the forest, excessive deforestation, unbalanced collection, and consumption of various natural resources can all be considered detrimental steps for our own environment. Apart from this, all the development works that are being carried out indiscriminately such as development of tourist spots, reckless deforestation for sake of various development projects can be advantageous for short term, but the long-term impact remains unconstructive. There are many aspects such as declining production of world-famous tea in Darjeeling, declining production of quality tea; negative effects of changing mountain weather on tea plants, lack of replanting of existing tea plants for years are notable threats for hills economy and livelihoods. Tea is not only an economic pillar for us but also a valuable natural resource of the hill economy. It is also the responsibility of the concerned department to preserve it for the long run. In addition, organic farming practices, production of oranges, various herbs and medicinal plants, production of cardamom, etc. needs special protection and balanced management.

As the state of Sikkim has shown exceptional progress and pattern in the field of organic farming. Similarly, there is a strong possibility that, we can develop the production and management of various crops for the development of organic farming.

At the end, the dream of every Indian Gorkha identity is Gorkhaland and we have fought a lot for it. But, how serious and capable we are for Gorkhaland is a something deep and serious question. When our long-term dream comes true, we need to make good use of it; for which the human and natural resources of the hills must need to be well-built and we must all bear the collective responsibility to make capable and best use of it.