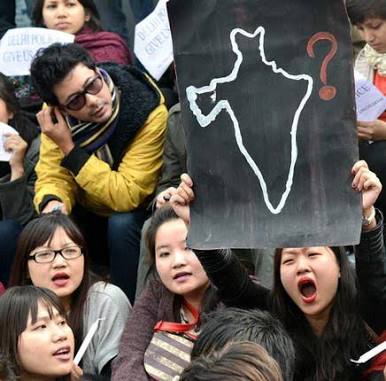 “When the doormat says you are not welcome, know that it is just a doormat, not the door.

When beyond the door someone says you are an outsider, remember that the individual, like you and like everyone else, is also an outsider somewhere.

Before life questions your identity, you must examine it yourself and learn which aspects to hold on to and which ones to let go.

Between sticking to an identity and building a reputation, choose to build your reputation.

The only identity worth holding onto, at any cost, whatever the cost, is humanism.”

I cannot add much to what Subroto Bagchi said to a rapt audience when he was delivering this speech at the  15th Convocation of Sikkim Manipal University, 2015. He hammered his words elegantly and right at the point. Point where it mattered the most. Isn’t it true that such type of issues has bothered you, Maybe when you visit a new place, work in a different land or even among your friends (so-called), associates at the workplace or even in your own family?

The Gothalas of France who won the FIFA Cup…Is that really So ????

My story begins a few weeks back. France lifts the FIFA World Cup 2018. When the country rejoiced many social media platforms made jokes of how a coloured “AFRICAN” team won it and it was just not a personal victory for the French people.   However, it was utterly dismaying to see that one of the most controversial racist tweets was by India’s greatest living showman Amitabh Bachchan(AB). He tweeted “T-2868: That’s it then … AFRICA won the World Cup 2018!!!”. This particular mentality throws up two very distinct questions. One,  nations which have coloured population are from Africa (i.e. they are immigrants) and the second being that they are hired workers [or Gothalas/ Bhariyas (Labourers) in common Nepali lingo ] who have no right to rejoice on the fruits of the seeds that they sow and will perennially remain as outsiders.  Both these thoughts are not only wrong but are also a very dangerous mindset and that too in this global village where technology is redefining the meaning of global citizen.

What was alarming, was the fact that it came from AB. A person who himself had been subjected or classified as Bhaiya or a non-Marathi manus  (non-Mumbaikar) and time and again he had to justify as to how deeply he has rooted that place and had contributed to the development of the city of Mumbai. However, he also had to time and again mention his roots from Allahabad and how he was also a “…chora ganga kinarey wala”. Such are the pangs of reverse racism. It hits you and hits you hard.

Taking this into further perspective I find it quite amusing when time and again (especially during elections) the so-called politically motivated general mass labels Smt. Sonia Gandhi of being a foreigner in India even though she has been the longest serving President of the oldest political party in India (Let me make it clear that I have no special love or hate for this party).

Such deep-rooted racist mentality is often perennially ingrained in the very ethos of a person that hinders the overall growth of not only the person in question but also of the of the community and nation that he/she belongs. Every country has been a home to very fine people. People of different races, culture, tradition and nationality.  This is the only reason why the highest arena of education is called University …meaning -“the Whole”. But it is seen that time and again, anyone and everyone tries to shake the very ethos of such a place of unchallenged magnanimity. These are the harsh reality of our times.

People of the northeast have often been subjected to a racial slur, racial violence and racial stereotyping. Words like Chinky, Chinese, Chowmein, momos have often been used as the racial slur. In fact, they have also been tagged with a behavioural stereotype of “being available” and “free”. These are the realities of mainland India. However, if we look into our own self and our own place we also see a full-blown reverse racism (not necessarily violence) as to how easily we call them “Bhaiya” or “Madisey” with a derogatory tone attached to it.  The recent riots in Shillong or the periodic riots in Assam are living examples of how equally intolerant we are. In his book Log Out! North-East India: An Untold  Story Of Reverse Racism,  Dibakar Purakayastha talks about the reverse racism faced by the Bengali Community in NE but then these are also true for any other community/ ethnic groups and parallels can be drawn both vertically and horizontally across the society. It is just that the story hasn’t been written.

Martin Niemoller wrote “….Then they came for the Jews, and I did not speak out— Because I was not a Jew. Then they came for me—and there was no one left to speak for me. “ That’s absolutely true  because the day  the national-foreigner (even if he/she becomes Indian), insider-outsider (among states), Hindu –Muslim, Christian-Jew, Sikh-–Buddhist etc racism ends , It will then become inter-community, intra  and inter ethnicity which is just a continuation of the original seeds of racism ingrained in the upbringing and parochial mindset.  Such a narrow thought process never ends. It always looks for new targets, new groups to further their own personal benefits. It is then passed on to the next generation.

It is a fact that people are inherently and most of the time unknowingly racist. These are very general views and we often take it lightly when we are in a majority. But, whenever the tables turn,  when the same set of people become a minority in some other set up or on a different land, everything backfires and becomes a viscous unwelcome reality.  It is this weird  mindset of a few (generally the ones in the echelons of a society or highly placed in the so-called degree oriented academic fraternity)  who influence the common critical mass that breaks a society and uses such a dogmatic ideology  to not only endanger a society that he/she lives in but also passes on these germs of racism into the next generation (be it in his own family or in his community or society) .  These are the people that society should be wary of.  These mind benders and air benders, who live mostly for themselves, have no special affection for their community but are only concerned with their personal gains and rewards. I do not fear these guys of making this earth a highly precarious place but would surely lament on the tumultuous life they live day in and day out and the families they breed.

Just to put everything once again into perspective: More lives were lost in riots, internal terrorism than at the borders. In the budget of 2015-16, the Defence budget was slashed but paramilitary forces got a 24.56% hike (meaning internal threat was rising) and most importantly we did not require an outsider to assassinate Mahatma Gandhi  …. The dangers lie within!!!!!!!

[This Article was originally posted in Sikkim Express]

The Practice of Selective Screening