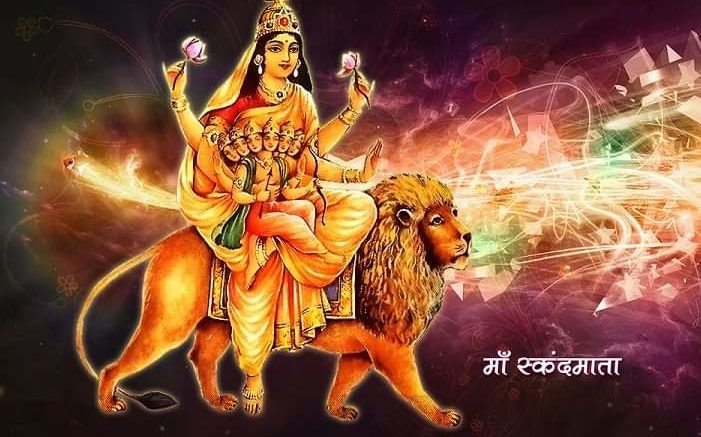 
Skandamata is the mother of Kumara or Skanda or Kartikeya, who was chosen by gods as their commander in the war against the demons. His glory has been narrated in the Puranas and he is referred to as Kumara and Saktidhar. His vehicle being peacock he is called Mayuravahana.

Legend says that once a great demon Tarkasur did extreme penance. He pleased Brahmaji with his devotion. When Lord Bhrama appeared – he asked for a boon to become immortal. Brahmaji told him that no one can escape death as it is already destined for everyone who takes birth on this earth.

Tarkasur, being clever, thought Lord Shiva will never get married and asked for the death by the son of Lord Shiva. The boon was granted. Considering himself to be invincible, he started tormenting the people on the earth. All the devtas went before Lord Shiva and requested him to get married.

Shiva agreed to get married to Goddess Parvati. Parvati then gave birth to Lord Kartikeya or Skand Kumar after marriage who demolished Tarkasur. Skandmata laid the foundation of mother son relationship. The devotees get immense love and affection from the goddess who devotes her in this manifestation.

Thus being the mother of Skanda she is Skandamata. She is particularly worshipped on the fifth day of Navaratra. This day striver’s mind reaches Visuddha Cakra and stays therein. In her image the Lord Skanda in his infant form is always found. She holds him in her lap.

SEE ALSO:  My space over a cup of Tea
Powered by Inline Related Posts

The scriptures are very eloquent in glorifying the fifth day of Navaratra period. As the mind of the aspirant, on this day, is in the Visuddha Cakra. So all his actions internal as well as external completely stop and the mind bereft of all thought-waves, is calm like a wave less ocean. It would be advancing towards the state of pure consciousness. It is completely submerged in the meditation of Mother Padmasana, quite devoid of worldly thoughts or coats of Maya. It is time when the aspirant should be most careful and cautious on the path of his Sadhana.

By worshipping the goddess in the form of Skandamata, the devotee gets all his desires fulfilled. He starts tasting the Supreme joy even in this very mortal world. The gateway for salvation to him is spontaneously opened. Her worship automatically includes the worship of Lord Skanda in his child form. Only she has got this pride of place. So the striver should particularly be attentive to her worship. Being the presiding deity of sun god, she bestows an uncommon luster and radiance on her devotee. S/he is always surrounded by an invisible divine halo, which always maintains his ‘Yoga-Ksema’.

Sightseeing in Darjeeling: The Reality of Development and Switzerland Dreams

4th Day of Durga Puja – We Pray to Maa Kusmanda