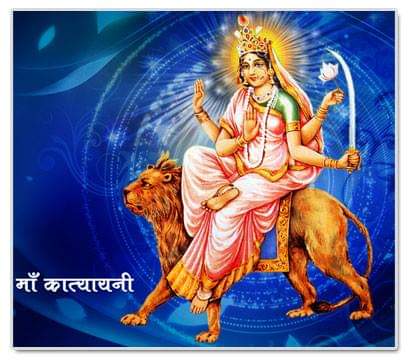 
The legend about Maa Katyayani runs as follows.

There was a great sage named Kata. His son was Katya. In his lineage Katyayana became a sage of worldwide repute. He practiced austere penance for several years in order to get the mother goddess propitiated. He cherished a keen desire in his heart to have the goddess in the form of his daughter. The mother was pleased to accede to his request.

After sometime when high-handedness of Mahisasura, the demon, crossed every limit, the trinity of Gods-Brahma, Visnu and Siva, got infuriated and they created a goddess by apportioning some part of their splendor, in order to destroy the demon. The sage Katyayana had the first privilege to worship her, so she was called Katyayani.

Another story tells that she did take birth as his daughter. She was born on the 14th dark of the month Asvina. Accepted the worship of Katyayana for three days-e.g. on 7th, 8th and 9th of the bright fortnight in the same month and killed the demon on Vijayadasami.

She is ever unfailing in granting the wishes of the devotees. The Braja damsels worshipped this very goddess with a desire to have Sri Krsna as their husband. She is an established presiding deity of Braja area. Her form is extremely divine and radiant. Her complexion is golden bright and radiant. She has to use arms. Her right upper hand is in a pose of allaying all fears and the lower one is in a pose of granting boon. In her left upper hand she holds a sword and a lotus flower adorns her lower left hand. Her vehicle is lion.

On sixth day of Navaratra it is her Katyayani form that is worshipped. That day the mind of the striver stays in Ajna Cakra. In the Yogic discipline Ajna Cakra is of greatest importance. His mind staying in Ajna Cakra the striver makes a complete surrender and offers himself to the goddess and then such a devotee very easily gets the direct vision of the mother Katyayani.

All the four objects-Dharma, Artha, Kama and Moksa are in easy reach of a Sadhaka who worships mother Katyayani with devotion and faith. Even though living on a mundane plane the devotee is equipped with an unearthly splendor and influence. S/he becomes immune from all diseases, sorrows and fears etc.

There is no better and easier way than the worship of mother Katyayani for the destruction of sins accumulated in the previous lives. Her worshipper always remains in close company and becomes fit for the supreme abode.

4th Day of Durga Puja – We Pray to Maa Kusmanda