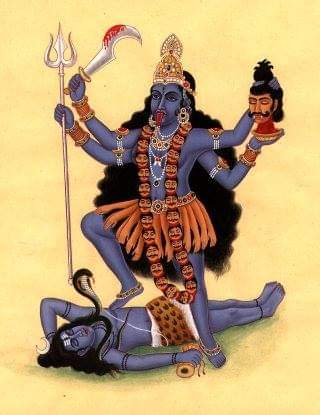 
Kalratri form of mother Durga is her seventh form in the sequence of Navaratra worship.

Her bodily complexion is that of thick darkness and black. She has disheveled hair. A necklace flashing like lightning adorns her neck. She has three eyes, which are circular in the form like cosmic egg, which always eject rays shining like lightning. Terrible flames appear when she inhales or exhales air through her nostrils. Her vehicle is a donkey.

Her raised right hand always seems to grant boons to all and sundry. Her right lower hand is in the pose of allaying fears. Her left upper hand holds a thorn-like weapon made of iron and in the lower left hand there is a dagger.

A form of mother Goddess Durga, Kalratri is extremely frightening to look at but she is always auspicious in effect. This is why she is otherwise known as Subhankari (doing good). So the devotees need not feel any fear from her.

In order to rid the earth of Raktabeej, Maa Durga incarnated herself in the form of Kalaratri and she killed the demon. She would lick the blood drops before they fell on the ground, and kept a Patra (vessel) to keep and imbibe entire blood of Raktabeej. In this form she got rid of the demon Raktabeek.

But Maa Kalratri was not the one to be tamed, and even after killing Raktabeej she went wild and ate all the demons she came across, stringing their heads on a chain which she wore around her neck.

It seemed impossible to calm Kali’s bloody attacks, which now extended to any wrongdoers, and both people and gods were at a loss what to do. Fortunately, the mighty Shiva stopped Kali’s destructive rampage by lying down in her path, and when the goddess realised just who she was standing on, she finally calmed down.

Thus the Kalratri form of the Goddess is said to destroy all demonic entities, and obstacles from one’s life.

On the seventh day of Navaratra the worship of Kalratri form is prescribed by the scriptures. The mother, Kalratri destroys the wicked.

Danava, Daitya, Raksasa, Bhuta, Preta and all other evil spirits are terrified and run away as soon as the devotee remembers Kalratri. She is also the remover of planetary evil effects. Her worshipper has no fear from fire, water, wild beings, enemy or night. By her grace he always remains unmindful of any fear.

By keeping her form in the heart and meditating on her the devotee must worship her single-mindedly. He should observe all Yamas, Niyamas and Samyamas (all rules and regulations). Purification of mind, words and body is essential in her worship. She is Subhankari. The auspicious effects emanating from her worship are innumerable.