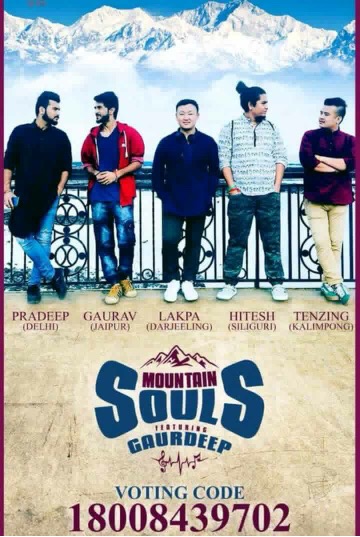 It is said that ‘When preparation meets opportunity, luck is what happens’. This is a story of a small kid dreaming of reaching the world with his voice as a medium for he hailed from the mountains, the place with the highest altitude in West Bengal – Sandakphu.

With the mountainous Sherpa blood in his veins, Lakpa was born to Mr.Tshering Sherpa and Mrs Sherpa as their third child in the mountainous village of Tonglu. Yes!! The very lodge you reside or have your lunch on your way to Sandakphu run by Mr Tshering Sherpa. With his passion for singing, 8 years old Lakpa Sherpa came in light with his “Ek din teri raho mei” on Youtube. After his Primary Education in Meghma, Lakpa did not fail to let go of his talent unnoticed, singing his first song “Tuta Tuta Ek Parinda” and winning the hearts of all his teachers and fellow schoolmates in the auditorium of St. Robert’s Higher Secondary School in his 6th Standard. Then, a temporary resident of Frimal Village, below PNH Zoo, Darjeeling, Lakpa Sherpa performed extraordinary feats with or without a mic, at a very young age.

Impressed by the singing of the newbie with his raw and untamed voice, well know music artists of Darjeeling Hills and former teachers of St. Robert’s School, Sir Pema Lama and Sir Deep Waiba guided and brought the best out of the lad. At a very young age of 17, Lakpa recorded his first song “Gham Timee” written and composed by Professor Sudarshan Tamang, Sikkim University. After his +2 Lakpa was good to go with his academics, pursuing B.Sc. Physics Hons. in St.Joseph’s College, North Point, Darjeeling.

While his video made it to the Judges of Star Plus based TV show Dil Hei Hindustani 2 and was selected for the live audition round in Kolkata where he met his fellow senior Hitesh Pradhan, former student of St.Jospeh’s College and resident of Siliguri who too was blessed with exceptional talent of singing, along with Tenzing Dhonyo, mastered in the art of Tibetan Folk music, resident of Pedong, Kalimpong. Together they formed the Moutain Souls.

With the final auditions at Mumbai, the Mountain Souls were elevated to the sky with an unnatural and unprecedented level of beatboxing by the bear boxing duo – Gaurav and Pradeep forming “The Mountain Souls ft. Gaurdeep”. Ever since the TV rounds, run and judged by India’s celebrated singers Sunidhi Chauhan, Badshah and Pritam Da, the group have been exhibiting extraordinary feats and winning the hearts of well-known singing stars of India – Shaan, Udit Narayan, Benny Dayal and the list goes on. Performing with highest of spirit and rocking the stage with “Jai Jai Kali Maa Kali, Aayo Aayo Gorkhali”, our lads have made it to the finale and now to win the show they have appealed for a vote to the humble people of Darjeeling, Kalimpong, Mirik, Siliguri and Tarai-Dooars.

“I always dreamt of singing but without the fine people of Darjeeling who have encouraged me so much, my family and my friends, the teachers of my primary school in Meghma and the teachers St. Robert’s School who have guided me so far, my dreams would have been limited just to the nights I was asleep. I thank each and every Gorkha blood for helping me reach this far for if not for them, I still would have been limited to my academic career. Thank you so much for all your love and support. Please do vote for me and my friends – The Mountain Souls ft. Gaurdeep” says Lakpa Sherpa.

The voting lines are open until 28th of September with 18008439702 as their voting numbers. So please, please do vote and make the lads the singing stars of India.