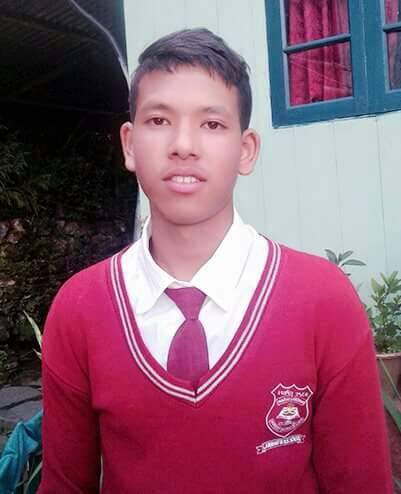 Rohan Pradhan, a student of Lamahatta Higher Secondary School and a resident of Danra Gaon in Lopchu T.E. Darjeeling, has proved to himself to be a big spark of talent by scoring 90.2% in the Madhyamik Pariksha this year.

90% in our region still remains very low in frequency, especially for the Madhyamik candidates. In such, the case of Rohan Pradhan becomes even special, given that more of the factors that encouraged him to put in all the effort wouldn’t favour him to score that high.

Born to Mr Dhiren Pradhan and Mrs Kalpana Pradhan, Rohan Pradhan is a part of a very humble family. Rohan acquired his primary education at St. Stephen’s Nursery School in Lower Lopchu, which doesn’t exist anymore. He continued his education at Lamahatta Higher Secondary School after leaving St. Stephen’s Nursery School and from there he finally appeared for his Madhyamik Exams.

Rohan, along with his friends would walk around 12 km every day to attend his school, and he proved that every km that he walked was a step further towards his goal and dreams. We can all have dreams, but it becomes a bit difficult to feed your dreams if you need to live through the situation where you yourself have to build the conditions for your dreams to thrive. There is every possibility that your dreams get murdered in the hands of the circumstances that you walk across every now and then.

Rohan appeared for his exam from Lamahatta Higher Secondary School, a school which would have its odds of having a student like him very low anytime soon. He did everything staying at a place where you wouldn’t bet finding too many good students. The environment for studies was not as good as we have in the town, there were lesser people to guide, and the importance of education was not as well realised. To put it short, he shaped himself amidst all the adversities. He would study 12-14 hours every day and then he did it without taking any tuition, quite an example for those who think board exams cannot be cleared without tuitions.

Rohan mentions his parents to be very supportive of his studies. His father, who works in a tea garden, and his mother, who works as a helper in ICDS, never let his focus shift from studies on account of the household chores.

Of course, there were works that needed his attention. They had to look after their home, their cattle and everything else that every other household in the village would. But they always let Rohan choose his priorities. Whatever he did would be out of his own will, not having to sacrifice any time outside study.

His biggest inspiration he says was his elder brother Raj Pradhan, who had already flagged the banner of his family high last year by scoring 76% in his board exams. Rohan also found his inspiration from all his teachers who would every step motivate him and encourage him to work hard.

Rohan dreams of becoming a professor someday. He wishes to study Mathematics and make his contributions to the field of academics. For now, he wants to continue his education with science as his stream and he seeks admission at SUMI School in Kalimpong as Lamahatta Higher Secondary School is not equipped to teach the science subjects.

Rohan is a part of a revolution, a process of breaking the norms. He has clearly exemplified what courage and determination means. He is a voice that may either lose itself to silence or echo in the heart of thousand young minds who feel like giving up on education every day, the ones belong to some village in a busty or tea gardens whose name we might never have heard, the ones who make their way out from the schools you never knew it existed, the ones who would give up their family’s chance to a daily wage to have themselves into education, the ones who after spending thousands of money on coaching and tuition still think it is very hard to get through.

He is an example to all of us.

We wish that the confidence and willpower that Rohan has earned after burning a lot of midnight oil doesn’t perish away. We wish him all the best in his journey ahead. We wish him all the success in life and hope he goes on to fulfil his dreams someday. We hope that his strength against adversities stand as high as it does today.

Be the first to comment on "Rohan Walked 12kms Everyday and Scored 90.2% in Madhyamik"