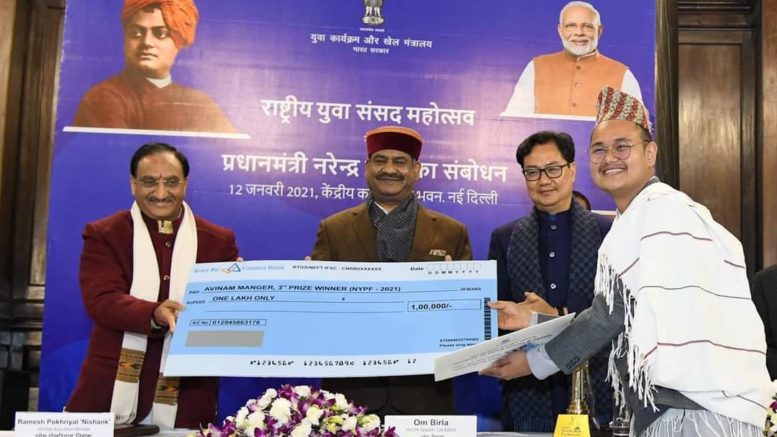 TheDC team sends a warm ‘Shout Out’ to Avinam Manger of Sikkim for ranking All India 3rd in the National Youth Parliament Festival (NYPF) 2021, held today in the Parliament.

Avinam, originally from Dikchu, East Sikkim, was born and brought up at Tibet Road in Gangtok by parents D.N. Manger and Jashodha Gurung.

The 21-year-old is currently pursuing literature at Nar Bahadur Bhandari Degree College, Tadong. He is also a writer and a poet.

Avinam, spoke on the topic ‘Vocal for Local: Pathway to Transformational Change to make India an Economic Superpower’ at the Central hall of the Parliament.

Earlier he had told Sikkim Express, “When I am representing Sikkim in the National Youth Parliament Festival (NYPF), it is time to raise my voice. I want the Central government to know what Sikkim is capable of. Vocal for Local’ is a new concept started by the Central government, so I don’t want to limit myself to national articles, but try to take examples from my own State.”

I admire Avinam's lively and passionate speech. He hails from Sikkim and spoke at length about India’s development. Do listen. pic.twitter.com/bsta9SRpHU

He is also an active NGO member and had participated in Sai Youth Parliament at Kodiakanan in 2019.

We CONGRATULATE Avinam for his success and we are hopeful that his win will inspire thousands of our youths to attempt to be the best in their vocation.

Take a bow Avinam!! You have earned it!!