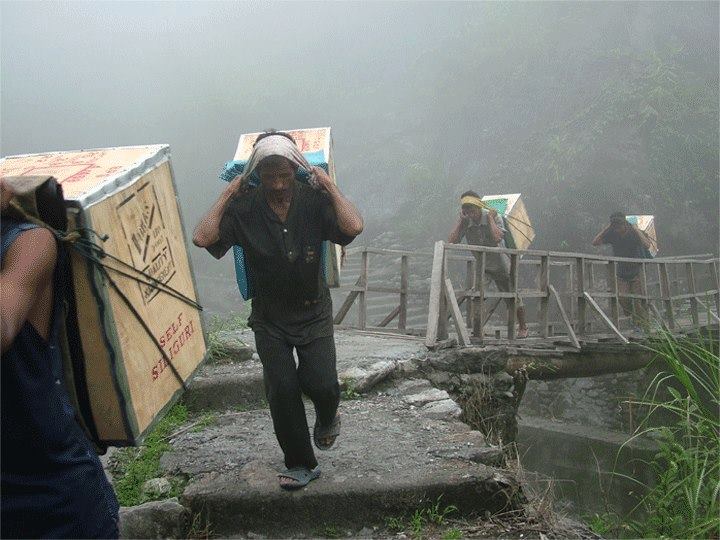 Come rain or sun, the workers have to carry these heavy boxes for an hour and a half... they wages US$1.9 per day for 8 hours of back breaking labour

When Mr Henry Montgomery Lennox planted the 1st tea saplings in 1899, Jungpana did not have access roads; people had to walk up and down the treacherous mountain slopes to reach the garden.

116 years later, and 68 years after India’s independence, nothing has changed. There is still no access road to Jungpana even today. Perhaps the story of the deprivation of Jungapana is reflected in its name. If legends are to be believed, the place got its name when a Gorkhali servant Junga Bahadur bravely fought a leopard while trying to save his British master during a hunting trip. The brave Junga Bahadur did save his master but was grievously wounded and wanted to drink water, his master took him to a nearby stream and got him water to drink, but after taking a few sips Junga died, ever since that day the place is known as Jungpana – where Junga had his last drink.

The faithful Gorkhalis (most likely descendants of braves like Junga Bahadur) are still serving their Masters, only today the Masters are of Indian variety instead of the Brits.

Marketing is everything, the Jungpana tea estate official Facebook page reads, “The journey of discovery of Jungpana begins as you cross a small wooden bridge at the bottom of the valley. Passing by a mountain stream that cascades down a waterfall, and then gurgles as a small rivulet – you reach a flight of steps some of which are broad slabs, some narrow ledges that climb steeply up the hillside. Worn by decades of use, these steps are the gateway to this estate” – Oh the romanticism…. but look closer and all that this statement is saying is that the access road to Jungpana does not exist, and these old worn-out steps are the only way in or out of this tea estate.

The Kejriwal family which owns the Jungpana tea estate market Jungpana as “an Island in the Mountains” – sounds romantic, but sadly that is exactly what it is. Cut off from the rest of the world with no road connection, people in Jungpana continue to suffer today, as had Junga Bahadur in the 1800s.

In its website the Jungpana estate soft sells its isolation as, “It’s a pandoraic state – through mule tracks; across wooden bridges and up past a flight of 350 and more concrete stairs cut from the mountainside, the virgin Jungpana looms large” and this is what people in Jungpana have to live with, miles and miles of walking up and down the mountain to make their ends meet.

Roughly 200 families with around 1000 population live in Jungpana, and all that they have in the name of Government facility is a primary school. Even that school is nothing more than a tin-shack. This is supposed to be a PRIMARY SCHOOL

Despite rain or heavy storm, come 7 A.M and children have to leave for school and they are forced to walk for almost an hour and a half from the nearest road access. By the time they reach school they are fatigued, and when they get home, it is always dark. It is impossible for these children to focus on their studies after having to conduct such a gruelling journey every day. Thus it is no wonder that most of the youngsters quit school and the vicious circle of deprivation continues.

The worst sufferers, however, are those who are old, infirm, pregnant women and sick. Despite 68 years after independence Jungpana still doesn’t have any health facility. One cannot walk for an hour and a half if one is sick, so due to the absence of a road access, the locals are forced to carry their sick and old people on the back of a chair. While on our way to Jungpana we came across a group who were doing exactly that, it was heartbreaking, to say the least. The journey itself is killing, and if it’s an emergency situation then people are left at the mercy of God – Bhagwan Bharose.

You don’t see children here playing, as there is no playground or any such basic facilities which are the hallmark of a civilized society, our people are forced to live a primitive life due to the neglect and apathy on the part of our politicians and also Jungpana tea estate.

While Jungpana tea sells for up to Rs 25000/- per kilo in the Harrods of London, the workers here continue to suffer. They not only have to work in the tea gardens, but they also have to carry the loaded tea upto the nearest road access (an hour and a half away) “through mule tracks; across wooden bridges and up past a flight of 350 and more concrete stairs cut from the mountainside.” Be it winter or summer or worse yet Monsoon, the tea workers have to carry heavy loads up and down these treacherous paths.

It’s a classic case of double jeopardy, due to the lack of roads there are no economic opportunities here so people are economically deprived, and on top of that goods of daily need are expensive here as the shopkeepers have to pay a hefty carrying charges for the goods to be brought in. If there is heavy rainfall, this bridge – which is the only connection Jungpana has to the outer world will be washed away

GTA chief Bimal Gurung visited Jungpana sometime ago, and he promised to build the road, but work is yet to start.

We talked to a few locals, and while most were reluctant to comment, one individual said, “Hami lai bato bhaye bhai goyo… bato bhayo bhane hamro lagi Gorkhaland bhako jastai ho… All we want is a road to be built… for us having a road would be akin to attaining Gorkhaland statehood”

This comment stood out for us, as it summarized the whole saga of deprivation that people in Jungpana and numerous places like it have to suffer every day… This underlines one of the fundamental reasons why we need to separate form Bengal – they take the tea garden revenue for their coffers, but they have not done anything for our villages and people.

After 68 years of independence, while rest of our countrymen and women are surging towards a Digital India, people in our community are still waiting for a road to be built.

Nothing can be more tragic than this.

Be the first to comment on "Jungpana – A Tale of Deprivation"