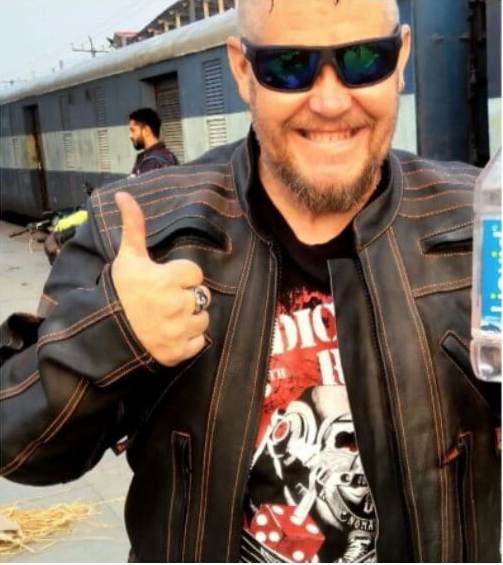 A tourist from New Zealand, identified as Shawn Michael (50) was killed near Himalaya Hotel in Birpara after being hit by a vehicle. He was part of a biker group heading towards Kajiranga National Park via Birpara- Hasimara-Guwahati, when he met with an accident at about 6-7PM near Himalaya Hotel Birpara on Wednesday.

According to his friend Jeff Evan, they were heading towards Hasimara to stay in a hotel. When they reached Himalaya hotel, a Magic (mini-truck) was turning from a wrong side without any lights on. Shawn collided head-on with the magic truck. Though he was wearing all safety gears and helmet, he was badly injured.

His friends with the help of some locals took him to Birpara Hospital. Shawn was alive when he was brought to the hospital, but due to poor facility in Birpara, he was immediately referred to Siliguri Hospital. Tragically on their way to Siliguri, they were stuck at Birpara Railgate for at least 15 mins as a train was passing. Jeff said, “the road here is terrible.”

Unfortunately Shawn was not responding to Jeff, so he decided to get Shawn back to Birpara hospital.

Shawn died in the ambulance.

Such is the pathetic state of affairs at Birpara hospital, that Shawn’s body has been taken to Alipurduar hospital for preservation, as Birpara hospital even lacks facilities to store and preserve a dead body.

SEE ALSO:  SHOCKING: 12 Year Old Child Battling for Life, After Being Repeatedly Raped by Her Uncle - a Pastor, and Left Pregnant
Powered by Inline Related Posts