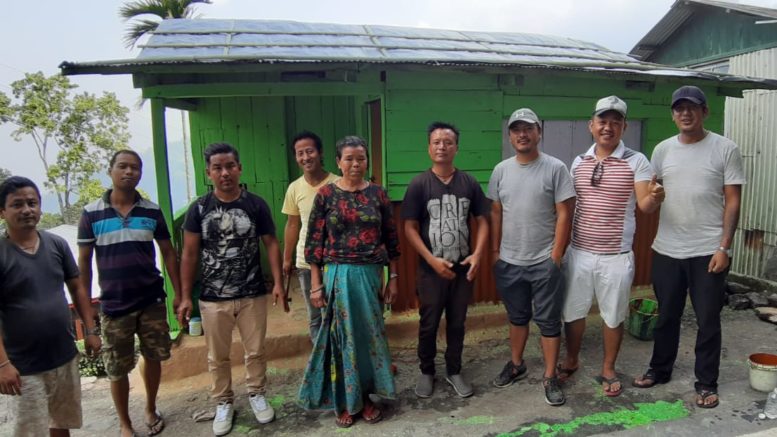 
Ramla Tamang from 8 Number, Peshok has waited over four years for the promised house provided under the Tamang Development Board. While she was assured of the assistance way back before 4 years, nothing of the assurance has materialized as yet. Later, she was given an excuse that the house could not be constructed as it falls under the Tea Garden area and she would need a NOC from the tea garden to construct the house. Despite several requests to the Development Board and Local Panchayat, Ramala has not received any assistance.

Today, Ramla Tamang goes over to her neighbor or relative’s house to sleep in the night because of the leaking roof. With the incessant rains of the Hills, her house is today in a bad condition, ready to crumble anytime.

Recently the Peshok Yuva Sangh came to know of her plight and a few members volunteered to help Ramala. As she lives alone, she struggles every day to keep the house together. As reported to us, members from the Yuva Sangh recently repaired part of the roof and painted the walls. However, the patch jobs by the volunteers cannot be a long term solution to Ramla’s worries.

As the election heats up everywhere in the Hills, we are afraid that people like Ramla may become political pawns for local leaders. As there are rumors spreading that the Development Board will construct houses only for those who vote for a particular party or candidate, Ramala’s feels her plight is beyond the politics and hopes that the concerned authorities and leaders would come to her rescue.

The story has been covered in Himalayan Darpan, local newspaper from Darjeeling.

TheDC team sends out warm SHOUTOUT to the Peshok Yuva Sangh and hope that they continue to extend all possible help to the lady. We hope that the concerned authorities, development board officials, and panchayat and intervene to help Ramala Tamang.