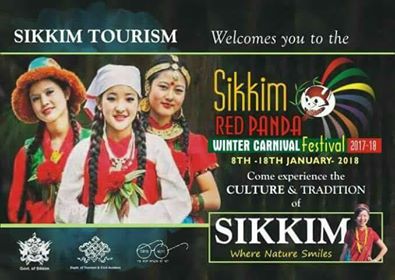 The Sikkim Red Panda Winter Carnival Festival is a Mega-tourism festival of Sikkim which is celebrated for 10 days each year. The Festival is an initiative undertaken by the Govt. of Sikkim to showcase Sikkim’s rich and diverse culture, traditions, customs, cuisines, bio-diversity, history and lifestyle. Spearheaded by the Tourism Department, it is the biggest tourism festival in the State and a major attraction for tourists who come to visit Sikkim from all over India and overseas. The festival aims at promoting sustainable tourism by highlighting the prominent features of Sikkim such as the Himalayan mountain peaks, holy lakes, forests, monasteries & temples, eco-adventure sports, wildlife, and organic farms along with the extravagant display of its culture, traditions, cuisines, folk dances and songs.

Spread across 10 days, the festival serves as an ideal attraction for tourists and locals looking to experience Sikkim at its best.

Another main aspect of the festival is to promote the growing Organic Culture prevalent in Sikkim and to accelerate its growth globally. The state of Sikkim has been declared as the first organic state of India, and the State will showcase one of India’s largest organic products exhibition and sale during the festival.

The festival was first launched in the year 2013. The festival which is named after the exotic Red Panda, the state animal of Sikkim is organized by the State Tourism Department, showcases a melange of cultural displays under one roof. Members of all the communities take part in this festival and the aim of the festival is to revive and protect the rich culture of Sikkim. For visitors, it means a closer understanding of the people and culture of Sikkim, and an opportunity to experience the food, songs, dances and customs of Sikkim. The festival unites one and all in Sikkim and the visitors from across India and overseas. The festival is particularly designed to offer tourists the opportunity to witness and experience the local culture, traditions, dance, music, food, etc and at the same time will provide the locals with the opportunity to showcase our culture and traditions.

The Festival promotes communal harmony and unity in diversity whereby all the ethnic communities of Sikkim come together to celebrate life and culture during the mega festival. Sikkim’s population comprises of many ethnic, linguistic and cultural groups, each characterized by their unique culture, customs and traditions that exhibit strong bonds with nature and the environment. Since the state of Sikkim is home to several closely-knit communities, which have their own distinct festivals, languages, religion etc, these different communities have their own folk songs & dances to celebrate their life. The folk dances of Sikkim combine all the components of folk culture, namely folk songs, folk musical instruments, traditional attires, and the festival provides an opportunity to display these important aspects of the traditional and folk culture of Sikkim.