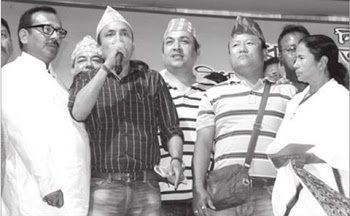 The Bengal government is working on a number of proposals to expedite the socio-economic development of adivasis and Gorkhas in the Dooars and the Terai, sources said on Monday.

“A meeting was held in Calcutta on Monday, wherein minister Aroop Biswas discussed a number of proposals to improve the condition of adivasis and Gorkhas in the Dooars and the Terai with Alipurduar zilla parishad sabhadhipati Mohan Sharma and Alipurduar MLA Sourav Chakraborty,” said a source.

Both Sharma and Chakraborty are prominent Trinamul leaders of the Dooars.

The proposals have come up a few days after most Gorkha Janmukti Morcha leaders and their followers in the plains switched to Trinamul.

“Their defection has been a major blow for the BJP and the Morcha. It would largely help Trinamul in the upcoming elections to rural bodies,” said a Trinamul insider.

Both the forces have eight members and are headed by Birsa Tirkey, the state president of the Akhil Bharatiya Adivasi Vikas Parishad and Binod Ghatani, a former Morcha leader of the Dooars who is in Trinamul now.

Tirkey and Ghatani have said they lack necessary infrastructure and powers under the north Bengal development department. Each task force has been given Rs 5 crore to carry out development works.

Tirkey said he wanted the number of members of the task force to be increased.

Apart from the two bodies, there is also the Terai Dooars Adivasi Development Task Force headed by Wilson Champramari, the Trinamul MLA of Kalchini.