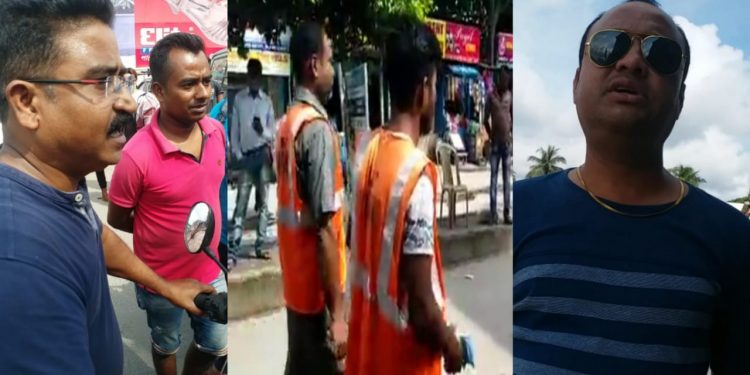 Those who confronted and attacked the Khaar Samay reporters


“Journalism can never be silent: That is its greatest virtue and its greatest fault. It must speak, and speak immediately, while the echoes of wonder, the claims of triumph and the signs of horror are still in the air.”
— Henry Anatole Grunwald

A group of Journalists from the local news portal Khabar Samay were assaulted yesterday at New Jalpaiguri Railway Station parking lot, by a group of goons allegedly associated with Trinmool Congress. For the past few weeks team Khabar Samay had bravely exposed how goons at NJP Railway station were collecting illegal parking fees, following which there had been a crack-down on all such collections. Yesterday on the 24th of September, team Kabar Samay had gone to NJP to highlight and verify the impact of their reporting; however they were first confronted by two individuals, who along with a group of 25-30 others later assaulted the team.

Journalist Subham Agarwal who was among those assaulted yesterday has said, “We had initiated a drive on 9th of September 2019, against unsolicited and illegal parking fees charged at New Jalpaiguri Railway Station, in furtherance of which w had visited the premises of the Railway Station time and often.” In this context, they had met with the Divisional Railway Manager (DRM) who had taken steps to stop these illegal parking fees.

Yesterday when our team including a video-journalist, a reporter and the driver of our vehicle were there to take coverage of the positive results of such drive, we were stopped by two men, who started questioning on our purpose of initiating such drive. Further a lot of men, nearly about 20-25 people, joined in and started abusing me and one of our female journalist, wo was present there at the spot with the team.”

Recounting the horror they had to face, Subham said, “In no time they started hitting us with fists and blows, and one of them hit me with an iron rod at the back, and since we were less in number we stood in a helpless situation and badly injured, wherein I fell unconscious. I sustained injuries on my upper lip, fingers and there are internal injuries as well.”

In addition to this, the goons stole over Rs 6000 from Subham as he lay unconscious.

Sources have informed us that when NJP Station Master tried to have a talk with these miscreants about unaccounted fees collection, they had even held the Station Master by the collar.

Today, NJP police have arrested two individuals in connection with the attack; however the alleged masterminds who are Contractors at NJP and are highly connected to Trinamool Congress are yet to be apprehended.

While TMC leaders harp on democracy and freedom of press across the country, her goons are attacking journalists every day. Shame on those who provide political shelter to such criminals.

We stand in solidarity and support of team Khabar Samay and request our readers to condemn this incident. True Journalists who work for the people, and not politicians will NEVER GIVE IN TO VIOLENCE.