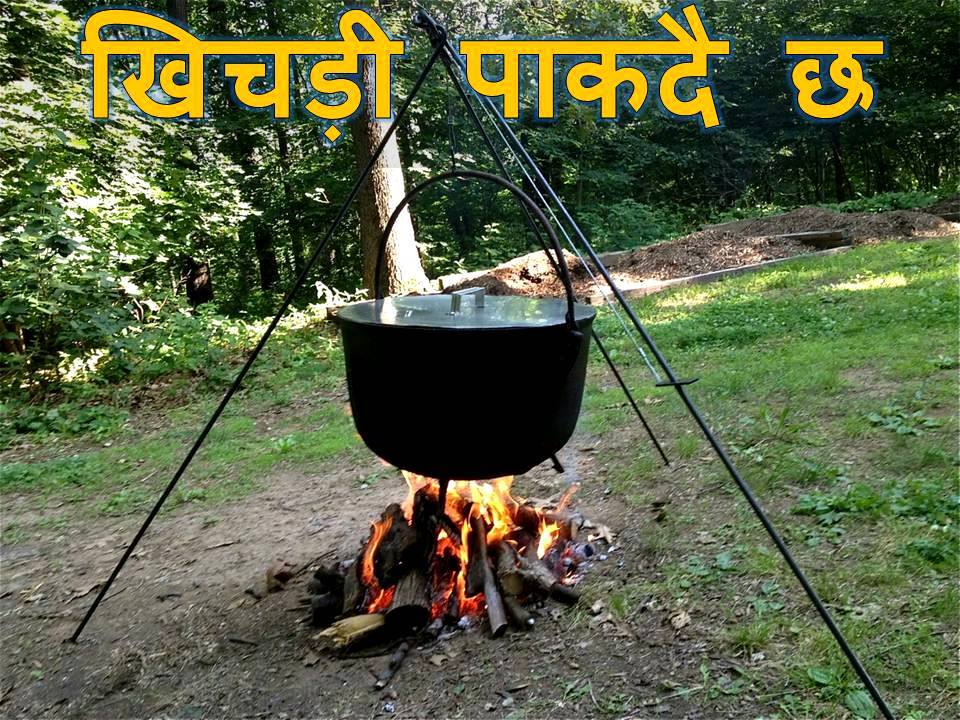 “I dread the mornings these days, back in 1986, I dreaded the nights,” says our Dhanraj Mams… it has been almost a year or two since we last met, he was selfishly busy being himself, while I was busy in making life happen for me and my family.

Not sure how many of you remember, Dhanraj Mams and I were a team inseparable, Mams preaching me his gyaan, while I did gan-gan… this bond had kind of broken after he joined the ‘board’ bandwagon and left my company, to be active with his own ‘jat-bhai’… While I was still stuck at the thado-galli ma bhako terso raksi ko dokaan, Mams had moved onto ‘bars’ that too not in the hills, but in five star hotels of Siliguri, or so I heard.
But today, here he was, back in the same old raksi ko dokan, and here we were, same as we were before…

I don’t know what he understood, but he laughed his heart out, and said, “tyo Fakundey jasto kaa ghichnu ta aanta… ali, ali gardai khaye…”

‘Fakundey – the blotted one,’ as you know is the right hand henchman of Aftero… He is much disliked by all – the object of our collective abhorrence… I am not sure if all of us hate ‘Nirmaya – the loveless’, but Fakundey we all dislike, of that I am sure… he has become the unofficially official face of corruption and failure that is GTA… and like a hedgehog he surfaces every once in a while, at times in Delhi, and at times in Darjeeling… and no matter where he goes, conspiracy theories and theorists abound….

“Why is Fakundey in Delhi?’ ask the numerous newly minted ‘Gorkhaland crusaders’ based out there… ‘What is he doing here? Why is he meeting ministers?’ ask the highly educated, and unnaturally well informed lot.

‘Why is Fakundey in Darjeeling? What is he doing there? Why is he not meeting the ministers?’ ask the same lot, once he returns back.

Dhanraj Mam’s is different, he is less complicated, instead of the routine intellectual barb, he wonders… why is Fakundey so blotted… “Tyeslai ghicheko le thicheko hola bhanich” says him, I nod in agreement… but wonder, ‘tara tapai ta tyesto mottyeko chaina ta Mams?’ he introspects for a while and goes, ‘mailey tyesle jati ghicheko pani ta chuina…”

Such is the hatred for Fakundey these days that you can spin any yarn against him and it will stick… Here take this to the public, for this is saachikai dhateko… “So my mama ko fupa ko kaka ko chema ko jetha chora ko kanchi chori ko boy friend confirmed that Fakundey is in Delhi, because he is worried that after his bank accounts got frozen, his properties will get frozen too, so he is meeting the Home Minister to make sure that his supply of Samosa is not stopped in any way.”

But more than Fakundey, people love to hate ‘Aftero- the difficult one’… everyone, including Nirmaya hates him… may be because of which, he has gone missing… and they have been trying to locate him desperately… but it is to his credit, that despite all the difficulties, ‘Aftero’ has managed to avoid arrest so far…

‘Where is Aftero?? Why is he hiding?? Lead from the front…” challenge the newly minted ones as they yell into mikes, to a crowd of adoring LEADERS in Delhi… in Delhi, there are no followers these days, it’s the ‘peoples movement’, everyone is a LEADER…

Mam’s is pissed off it seems with the shenanigans of these intellectual elites… he rants… “from the safety of 5000 miles away ‘Khai Aftero? Why is he running scared? He should come out in the open like us’ say the Delhi netas… while those who are dodging the bullets in Darjeeling are not really complaining… perhaps relieved in the fact that he is hiding, thus not directing the movement… also perhaps worry what will happen if there is an attempt on his life? Perhaps nothing… but what if there is an attempt at arresting him or taking his life, those who truly believe in his leadership are bound to retaliate, in the process burning down our hills… who will be responsible then? Bhana ta bhanich??” He asks…

I don’t know what to say… I say, ‘may be nothing like that will happen… may be people will celebrate his arrest as much as how we had celebrated when Appa had finally left the hills…”

Mams goes ballistic, and says… “Appa was Appa… nothing happened then, because he chose not to cause strife…. Aftero is difficult… while most of the educated lot may see him as a class 4 fail… For those who are from the marginalized families… tea gardens and remote rural areas… he represents the possibilities… the promise of our democracy… that someday it could be them… or their children who could be leading the Gorkhaland movement, or the state of Gorkhaland…. They feel ‘if Aftero can, so can we’… they will support him to the hilt… the hills will burn if he is attacked or arrested…”

But Aftero is abdero too… instead of keeping a low profile, every once in a while he makes an appearance, in combat jacket and speaks whatever comes to his mind… enraging the masses again, especially the “educated” lot…

But more than Aftero, it’s the educated lot that seems to have gotten Mams ko goat… “ko chai huncha anta, Bhanich?” he asks… “neta haru all missing… neta hunu chahane haru all busy in social media and giving bhasan… who will work for the people??”

As if to prove him correct, in comes Jitey with cell phone in his hands, and shows us a post, which reads…

‘Kunchai khichadi pakdai cha?’ written by ‘Appa Kasam’ the not so slim politician, with a not so thick a voice… and the ‘khichadi rhetoric’ has gotten spread like wildfire all over India it seems.

It’s easy these days to spread a rumor.

Set up a Facebook page… boost it by paying money and then become a sensation over night. Write whatever cosnspiracy theory you want to concoct, make some voice notes on Whats App, talk about it on Twitter… and voila the theory you concocted while taking a dump, has now become a “sachiikkaiiii hareyyyy” stuff across the Gorkha world.

Unwilling to let me go, Mams repeats his question “who will work for the people??”

I am stomped again, so I say… “new leaders are emerging…” he yells back, ‘leaders for whom? Leaders of what? Has anyone even filed a PIL against the atrocities hill people have suffered till date?’

On that note, I too wonder… the much vouched for GMCC also has a legal cell, in fact “Hamilai Justice Chahincha Kancha” the most prominent leader from an old Gorkha party himself is a lawyer… so is “Appa Kasam” leader from the party which led the 1986 Gorkhaland movement… so are the two stalwarts from “Jan-nai Na Bhako Jhandailey Andolan Garideko Party” who originally diverted the talks from Gorkhaland to GTA back in 2010.

Why have they not filed any PILs or why have they not come to defend those who have multiple cases filed against them? Why have they remained silent, even in their actions? Yet, they continue to question the sincerity of everyone else, but themselves.

The old communist who made a mistake in 1986 seems to be the only one who is sincere, but the ghosts of chyasi are perhaps never going to leave him.