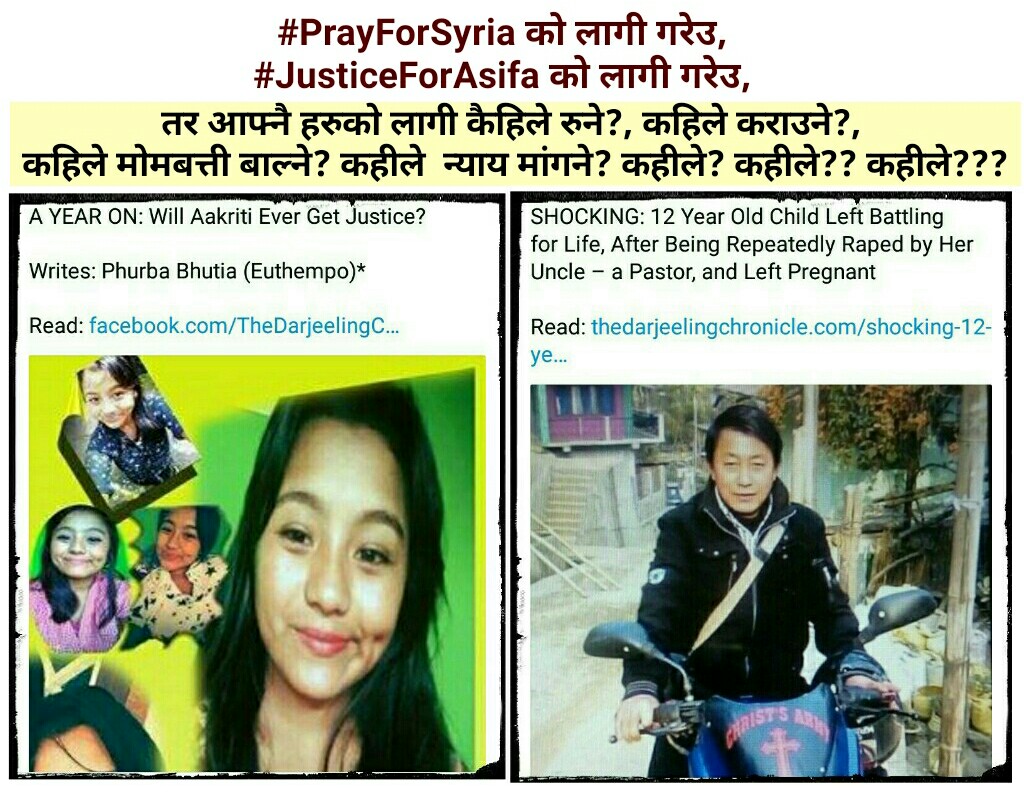 Shame on our community, we can protest for others, but not for our own

#Kathua, #Unnao and #Darjeeling. What links these three places?

These places are as far away from each other and as different as possible, but they are similar due to the nature of the crime which shook them to the very foundations, laying bare questions of morality and humanity. All three places, the scene of a gruesome crime involving innocent minors, perpetrated by the very people who are supposed to serve and protect the interests of the people under their care.

The victims at Kathua, Unnao and Darjeeling are all vulnerable minors. Each have been sexually abused by people who were supposed to protect them, people in power, religious heads and police personnel. The story of each victim is heartwrenching, as each have succumbed to the violent attacks in them and the two who have survived in Unnao and Darjeeling will probably never recover from psychological trauma, an aftermath of their ordeals at the hands of these brutal and bestial perpetrators.

However though there were widespread protests which are still on going in different parts of the country for the children of Kathua and Unnao, there has been little done for the victims in Darjeeling. No doubt opinions have been voiced on social media but little response was garnered when #Marg decided to call all public citizens to Divyavani (on 17/3/2018)to express their solidarity and support this victim of a  most heinous crime. Very few came when it was time to file an FIR against the perpetrator and to deliver justice to this little child.

It is about time we all came out of our comfort zones, travelled within the confines of Facebook and WhatsApp and voice our indignation on the streets so that concrete steps may be taken by those in power to bring to book these barbaric predators.

Let’s come together so that what happened in Darjeeling, Kathua and Unnao may never happen again.

Only then can we deliver justice to our innocent young people who believe in us and trust in our protection. No outrage for Gorkha daughters.

Writes: Kamlesh Rai – is a teacher at St. Teresa’s School, Darjeeling and is associated with MARG

71 Year After Independence – People Forced to Carry Their Sick and Infirm at Night in Hope Gaon, Dhajey, Darjeeling

1 Comment on "In Vogue: Outrage – But Not For Our Own"