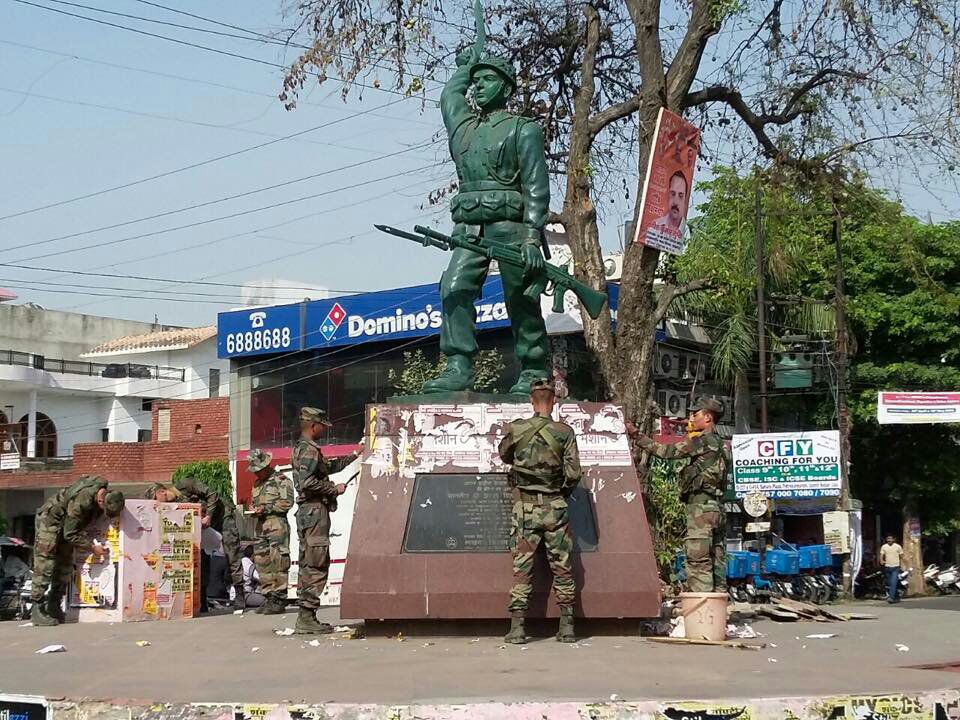 Some years ago Capt Manoj Kumar Pandey ‘s statue in Lucknow – were defaced by his fellow Lucknowites, and it was restored by Gorkhas from his Regiment.

The preferred ‘tool’ of the Gorkhas? Khukuri! These guys are sheer magicians with the Khukuri. Can just as easily chop off an enemy’s head as they can use the same side arm to delicately remove the offending posters that deface their hero’s monument.

Hats off to these simple people from the hills of Nepal / Darjeeling / Sikkim who can put anyone to shame with their single-minded dedication to whatever task they are entrusted with and a cheerful nature that can win over even the most evil of their enemy.

Then there are those that lead them into battle. Capt Manoj Kumar Pandey, PVC (P) was a Lucknowite, yet his immortal last words as he fell on the icy slopes of Khalubar were not in his mother tongue but in that of his men.

‘Na Chhornu’ (Don’t spare them) was what he said in ‘Gorkhali’ as he fell after receiving one final, fatal burst. Even in death, he paved the way for his boys when the grenade in his hand found its mark and took out the Pakis that had fired the last salvo at him. The enraged Gorkhas of 1/11 GR ensured that their fierce leader’s last command was executed with ruthless efficiency. Not a single Paki was taken a prisoner that night at Khalubar. When dawn broke, the battlefield was littered with dead Pakis of the Northern Light Infantry.

A foothold on Khalubar Ridge had been established by the ‘Kirantis’ of Manoj Kumar Pandey. Restoring our lands till the LoC was but a small formality hereafter.

A huge price had been paid, but willingly. But young Manoj and his ‘boys’, some of them nearly 2 decades elder to him, knew no other way.

It is these bonds, forged in blood and sacrifice, that ensure that his Gorkhas assume ownership of a memorial in his name, even if in a civilian part of his hometown, and without any second thoughts, let their Khukuris flash again to remove the defacement inflicted.

[The article is tweet compilation of Mr Harpreet @CestMoiz]

What Gorkhaland Means for a Non-Darjeelingey Gorkha

The Bridge on Painakumari Khola and a Night of Horror ﻿

Be the first to comment on "Capt. Manoj Kumar Pandey and His Gorkha Boys"