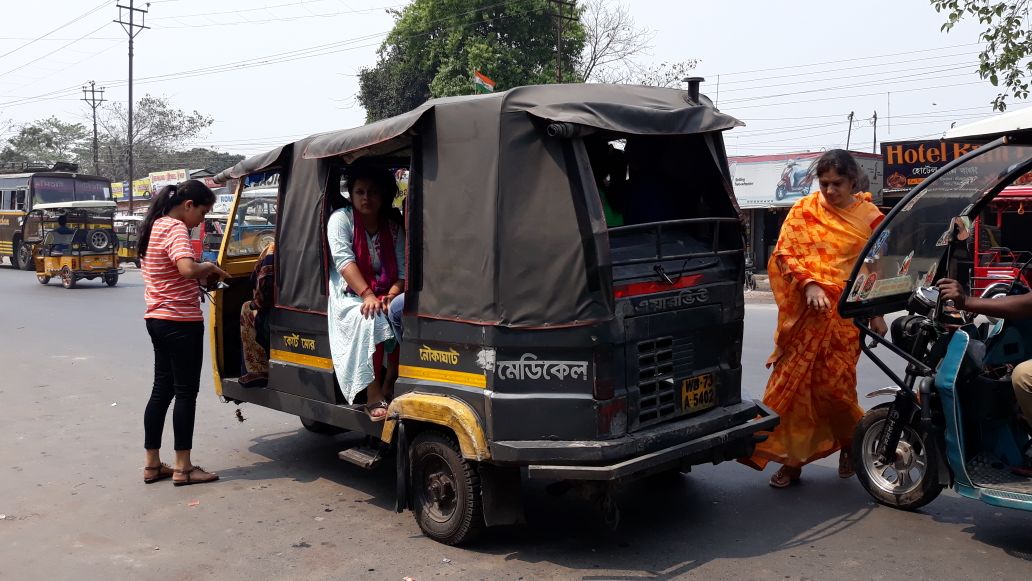 File pic for representative purposes only

It was on a Sunday morning, I happened to travel in an auto, it was too early for the traffic to get jammed, as thankfully most people on a lazy Sunday morning would not have come out to the streets. The morning dawned with early risers, some coming to find disappointing news in the papers, while many were hurrying for the Church services.
I was travelling from Bagdogra to Nivedita hospital, where my uncle was healing a gallbladder stone surgery. I was in a sort of hurry; luckily I was picked up by an optimist driver, who drove only with four passengers. I had a companion with me and the other two passengers included a middle-aged man, while there was a teenage girl, who wore a spectacle, and a sari. She had a handbag clung unto her shoulder and headphones plugged into her ears. She looked more mature than her age, that would have been possible due to the attire or the upbringing.
Nevertheless, we were going to share the same vehicle for about 20 minutes or so. Just when the vehicle was about to roll on, a small girl child happened to beg for money, she didn’t look that unkempt, she was carrying some vegetables in one bag, while the other hand were praising the God’s creation, which allows human to beg for food. The animals though are not so fortunate.
The small girl didn’t utter a word but was repeatedly asking for money from the teenager sitting in our vikram auto. The small girl could see me but she was too small to gather the courage to ask me, maybe many like me had pushed her a thousand times, that she dare not look into my eyes.
The teenager who was listening to some Bengali song didn’t care and didn’t bother to even peer into the eyes of the little girl. Why would she? It wasn’t unusual for her, as there are millions in the streets of Siliguri begging for money.
The girl didn’t budge, and the teenager too didn’t give her anything. I wanted to give the little girl something but I was waiting for the teenager to react but she was stoned from the heart.
I tried not to judge the teenager, or maybe I did, but I gave away ten rupees to the little girl and asked the driver to roll the auto.
The vehicle picked the pace, the little girl ran away, she wasn’t a beggar, maybe she was starved, maybe she was an orphan, and maybe her father doesn’t care for her. I was deep into my own thought of how a child could be deprived of basic facilities of food and nutrition. Why India still lacks basic amenities of life, the gap I thought was widening up between the haves and have-nots.
The teenager was still listening to a Rabindra Sangeet and occasionally humming to the tune, I glared at her for her cold behaviour. She didn’t respond. At least I thought, if she didn’t have the money, she could have been more compassionate towards the deprived girl. The girl was too uncaring.
Just then, the auto stopped and a few passengers got in, while the middle-aged man reached for his coins in the pocket and was gone. The driver started calling out “Market, Market, Market.
To my surprise, a hand started again begging for money, but this time it was a healthy widow, I looked at her face, she looked strong enough to be working instead of begging. I moved away from the window.
This is when the teenager all of a sudden pulled down her headphones and handed over a ten rupee coin to the woman. I looked at her in amazement. She gave a faint smile and plugged the earphone back to her ears.
The machine rolled again with a heavy sound, I thought to myself, what persuaded her to give the alms, all this while she was looking at my face from beneath the spectacle. She got down in Darjeeling More. Other passengers got on.
I thought to myself again, I had more money in my pocket as I earn for a living, but I could only give a ten rupees to the poor girl, but the teenage girl was a student, who may have given her lunch money to the widow.
At times we judge too quickly, it was a humble lesson for me to lean, while hers was an act of selflessness, mine of charity.
[Writes: Chandan Pariyar]

“Everyone’s Time is Valuable Not Only Yours’”: Harassment to Public by Motor Vehicle Department

Be the first to comment on "A lesson in Selflessness"