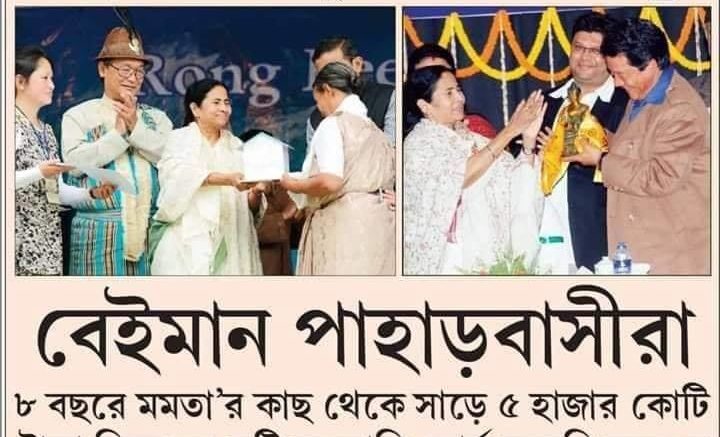 
The Gorkha Student Federation (Sikkim University Circle) strongly condemns the offensive headline published by “ Khabar 365” which had labelled the hill community as “Baimaan Pahadbasira”.  Here is the full press release by the federation.

The State Government under Chief Minister Mamata Banerjee has made a mockery of democracy in Bengal and Darjeeling. The fourth pillar, however, also seems to have fallen on Didi’s favour.  It is truly a sad day in a democracy where people’s mandate is being labelled as “Baimaani” towards Mamata Banerjee.

The people of Darjeeling have done no wrong by exercising their Constitutional ‘Right to Vote’.  The actions of the people stand within the four walls of the Constitution. People have every right to choose their representative. We see no wrong in this.

At the same time, we would like to question the newspaper which has tried to defame the Hill Community by labelling them “Baimaan Pahadbasira”. Is their action justified? Do they even know, the ground realities of Darjeeling and it’s adjourning areas?

The editor and journalists of the newspaper have broken all ethics of journalism by publishing such an offensive statement. The only reason why “Baimaan” became the primary word for their headline may be due to the fact that they are faithful to their Begum. Hence the “Baimani of Pahadbasira” may be a way to justify their perspective.

The newspaper has also accused the Development Boards of using 5.5 thousand crores. The revenue itself is very minimal as compared to what West Bengal gains from Darjeeling. The Tea Industry itself is known to generate Rs 1500 crores per annum.

Secondly, the developments boards formed on the basis of Catses is only a plan hatched to divide the hill community. True welfare of the economically weaker section can be done by the disbursement of the funds through the Boards formed on the basis of the economy rather than through caste.   Let us come to a conclusion by saying that the intention of forming the  Development board has failed tremendously. It should be noted that our aspiration for a solution to our identity crisis through the formation of Gorkhaland stands much higher than any other issues, let alone the idea of superficial development.

Darjeeling public vote will always be for Gorkhaland

a) have been deprived of their political and economic rights

b) have been subdued by the police

c) have been provided with unwanted so-called caretakers of GTA who have been occupying the chair without a public mandate.

Democracy in Darjeeling has been subjugated to a mere idea and a word in the “Civics book”. This is the faith of “Democracy”  in the worlds largest democracy.

People of the “Pahar” have liberated themselves. The election has shown given logical proof that people have no faith in the present GTA administration, Development Boards, the Mamtas, the Binays etc.

At the same time, we would like to congratulate our Hill community for standing together for “Gorkhaland”. We further insist that our public speak up against such malicious cases of racism. We would like to use this platform question the silence of Darjeeling Press Guild, Kalimpong Press Club, Siliguri Press Club, Mirik Press Club, Kurseong Press Club. They should speak against such unethical operation of Khabar 365. The “Baiman” tag also associates with these agencies since they are also invaluable entities of our Darjeelingey society as a whole. “Shouldn’t they be writing to the Press Club of India and the Editor’s Guild of India and the Ministry of Information and Broadcasting, against such a communal post, where our entire society has been called crooks?

We would urge our intellectuals, leaders, social workers, civil societies to speak up against such racism. We may have won a battle but the war is not yet over. The news headlines published by Khabar 365 has shaken our very foundation on which our struggle for identity is based on. The newspaper has called us ” Baimaan” with an intention to portray us as loyalties of Mamata. Let us remember are an independent Indian society who aspires to have our own state under this great nation. No political force or entities can influence us. We have loyalty to the Constitution, not Mamata.

We would also request the winning candidates to sue the newspaper and their Chief Editor!