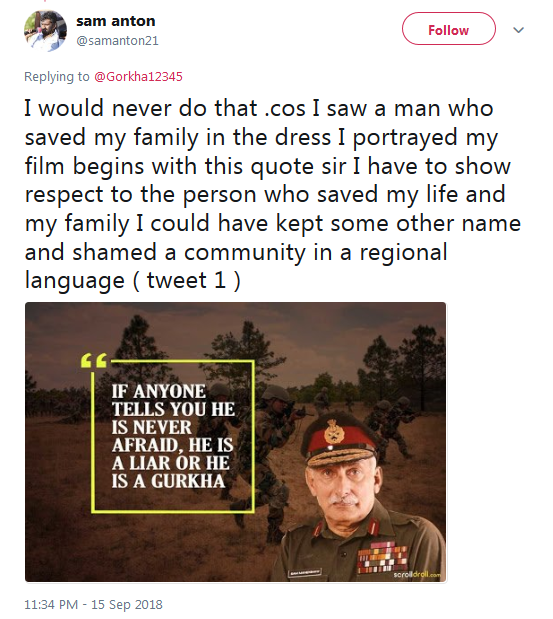 Recently I came across an outrageous tweet by some South Indian person, possibly a film director, launching the first poster for his upcoming movie “Gurkha”. That should have instead been a proud view if the poster depicted a uniformed soldier or a martyr wrapped in a flag as Gorkha (Gurkha), but to an utter despair it was apparently a Watchman standing with a dog. So right at this point, the entire dignity and achievements of a community gets reduced – to a profession, of that of a watchman. The community which spreads its root across the country and across the world, and has fed its blood to almost all the borders and battlefields in India and across, gets its identity appropriated to a “Chowkidar”.

Later, I came across another comment on the internet by a South Indian saying that the South Indians have never known Gorkha to be a Community but the term for them has always meant Chowkidaars and Night Patrollers. Was that a reasoning fair enough? If I today call a South Indian Dosa Wala, the entire South India will unite in protest. So, to sum up in a line, ignorance cannot be an excuse for stupidity.

I decided to wait and notice the developments.

A similar incidence of stereotyping had occurred years ago, when Prashant Tamang was made to wear a watchman’s uniform at Indian Idol and also later when an RJ had passed a similar comment towards him. The entire community had outraged and both the parties had to issue public apology for their remarks.

But sadly, no remarks of protest have cropped up from anywhere, apart from a few on facebook and twitter. So, where did it go wrong?

First, to see closely, the term Gorkha has lost its aesthetic value of a single community as of today. It rather exists as an umbrella term holding around a couple dozens of sub-communities. As the sub-communities have for themselves struggled for separate administrations and apparently have been able to achieve so, through the so called ‘development boards’. As thus, primarily, the people belonging to different sub-communities today are more concerned about the nilo chappar bhako ghar and nali-jhora contract than worry about the “Gorkha” community. This exposes how the state instrument of fragmenting the Gorkhas has been effective, and how our collective identity as “Gorkhas’ today stands in a vulnerable position. With paycheques flowing at the same pace, the day isn’t far where each sub community will have its own separate wars to fight, and even worse, they may be in a war among themselves.

Again, the most important thing to contemplate on, we have already surrendered our single most weapon identity crisis – the idea of Gorkhaland. I have heard many people considering that Gorkhaland isn’t important and striving for it has only caused more damage to our people and place. I may well buy the idea, but what else is important? Development? By the standards of West Bengal, we are already developed. In fact, we are one of the most developed districts in West Bengal. And if we are to develop further, we move by the pace and standards of West Bengal again, while our neighbouring regions with similar geography and demography will have reached a point beyond our imagination.

So, coming back to the issue, as we have already given up Gorkhaland Statehood for GTA (Gorkhaland Territorial Administraion), the idea of establishing a compact identity becomes a faint flickering light. Forget about rest of India, GTA isn’t even identifiable to the rest of Bengal. So, for the name of development, it’s a long way ahead for the Gorkhas to stop being the victims of such instances of identity appropriation.

Lastly, I believe that the flaws in our recent history have to be one of the major reasons why we are standing on such crossroads today. Since independence, the Bhasa Andolan has been the only movement that saw its motives fulfilled. Rest, our leaders have gained unmatched proficiency in selling the idea of separate statehood through the history for their selfish objectives. We have forever been fooled for mere bits thrown at us in the form of DGHC, GTA and GTA 2. History has in record that the Gorkhas can be killed and destroyed, and still be befriended for some compensation.

History has been evident that at the cost of our Pride, the Gorkhas now do have a price.

Be the first to comment on "Gorkhas – Pride and Price"