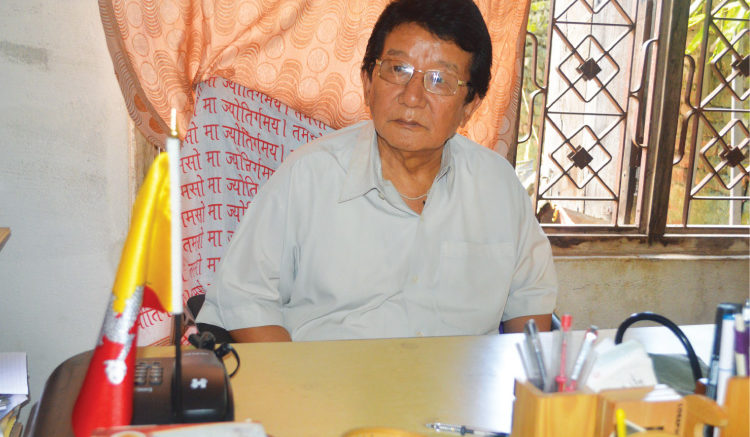 
Bhampa Rai’s vision was to work till all willing Bhutanese refugees were repatriated to their homes in Bhutan with honor and dignity. His goal was to fight against all the injustices meted out to the Bhutanese of Nepali origin.

Ten days have passed since our most beloved leader Dr Bhampa Rai left all of us forever. It was 00:13 on June 19, 2022, here in The Hague. I suddenly received a message from Parashar Dahal Bhai from the US asking me if I had heard the news of Dr Rai’s death. It was too shocking, but I did not believe the information. Before I could find the courage to confirm from my source in Damak, Dahal Bhai wrote again, saying that it was established as he saw the mortal remains of Dr Saheb during his video call with Indra at a hospital in Biratnagar. Very soon, this saddest news became viral on social media.

The news for me was too sudden and shocking, and I had never imagined it. I dared to write a short status on my Facebook page. Feeling empty, I imagined how the Bhutanese refugees’ movement without its untiring guardian sustains. I found it very difficult to believe, and the shock in my mind still made me feel suffocating. Four days have passed, but my mind is still in shock. I feel empty and valueless without my living leader at Damak.

Late Bhampa Rai was too determined and firmly believed that he would return to Bhutan, and only after that he would die at his village in Bara, Bhutan.

SEE ALSO:  How to Stick to Your Fitness Goals
Powered by Inline Related Posts

My last communication with him was on June 16, 2022, when he said he was feeling better after an operation and requested me to convey to friends worldwide his gratitude for wishing him his recovery. It was a very brief conversation. It came to be the last one forever.

We used to talk via Facebook messenger almost twice or thrice per week, and during each talk, he used to repeat several times that we should not forget our cause and work till our issues are amicably resolved.

I have just reread an official letter that the late Dr Saheb wrote to me as the Bhutanese Refugees Representative Repatriation Committee (BRRRC) chairman in December 2021. The wording of his letter is self-explanatory to show how generous and truthful a leader he was. He treated everybody equally and always appreciated the good works done by others without undermining their work because they were less educated or junior.

For him, work is work, and it should be appreciated and respected irrespective of who does that work. In this letter, he blessed me and directed me to continue the Bhutanese refugee movement till it is resolved. The letter is posted here for all to see.

With his demise, we lost our only guardian, whom we used to look up to when we were in trouble or in doubt of anything. I used to feel his blessings whenever I organized activities on the Bhutanese refugee or political prisoners’ issue.

With his demise, I feel we have a massive responsibility toward him: to work together to make his dream come true. His vision was to work till all willing Bhutanese refugees were repatriated to their homes in Bhutan with honor and dignity. His goal was to fight against all the injustices meted out to the Bhutanese of Nepali origin.

A permanent vacuum has been created in the leadership position after Bhampa Rai’s departure. His soul can only rest in peace when his goal of repatriating the willing fellow Bhutanese refugees to Bhutan with honor and dignity is fulfilled.

During my numerous interactions and meetings with late Bhampa Rai, I never heard him saying anything against any Bhutanese citizen. He was just against that regime which created the refugees and did injustices to the Bhutanese citizens. Late Rai was a very learned leader who used to keep himself updated on current global issues. He was a straightforward, honest, determined, principled leader full of zeal to work for the welfare of the sick and the needy. As a doctor, he used to treat all the sick people no matter whether they were Nepali or Bhutanese, for free of cost.

With Dr Bhampa Rai’s departure, the Bhutanese refugee movement has lost its only sincere and dedicated leader. A permanent vacuum has been created in the leadership position. His soul can only rest in peace when his goal of repatriating the willing fellow Bhutanese refugees to Bhutan with honor and dignity is fulfilled. For that, we, the globally scattered former Bhutanese refugees, should come under one platform and work dedicatedly towards fulfilling late Rai’s vision.

I want to appeal to all my fellow Bhutanese worldwide to convert this sorrow into a strength by joining hands together and working towards realizing the vision of our tallest leader late, Dr Rai. I think that would only be the best reward we can give the late Rai for his lifelong selfless service to all of us.

Writes – Ram Karki. He is Bhutanese Human Rights Activist based in The Hague, the Netherlands.

How to Stick to Your Fitness Goals

Be the first to comment on "In memory of Bhampa Rai, the Tallest Leader of the Bhutanese Refugee Movement"