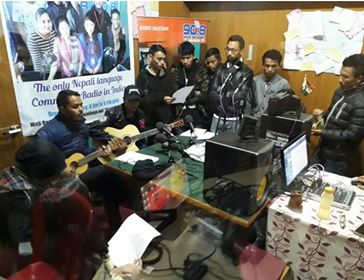 The competition consisted of recording an original Christmas Carol in Nepali language and placing it in Radio Salesian FB page for voting which ended on Saturday 30 December 2017 at 4.00 pm.

The 10 member team that got the maximum likes is St Paul’s Parish Kurseong youth group which performed “Manavko Avtar Lyai” carol lyrics and music composed by Mr Peter Lepcha. They got 273 likes, 127 shares and 4k views.

Program Coordinator at Radio Salesian RJ Samir Chhetri explains, “The Carol competition consisted of creating one original Nepali Christmas Carol by a team of ten or fewer members including musicians.”

Among the five groups which won are Nepali Brothers of Salesian College and Nitya Sayeka Mata Church Mamring who secured fourth and fifth positions respectively.

The winning teams may collect certificates and cash prizes from Radio Salesian Studios from 2nd to 5th January 2018, between 9am to 3pm. END

Be the first to comment on "Jingle Bells Season 2 Winners"