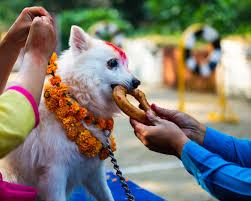 The second day of Diwali, Kukur Tihar, is dedicated to the celebration of relationship between humans and Dogs. Diwali, one of the great celebrations in the Hindu calendar, is a five-day autumn festival generally known as the festival of lights. Each day has its own focus, and specific observances vary from one denomination of Hinduism to another. Regardless of regional and denominational differences, Diwali is a period of gift-giving, storytelling, and recognition of the relationships humans have with all things.

The Gorkha Hinduism is unique in dedicating the second day of Tihar, Kukur Tihar, to the worship of dogs.

Dogs in the Hindu tradition

Dogs are especially important to the Gorkha Hindu practitioners. During day two of Tihar, Kukur Tihar, the role of dogs in human life and throughout history is celebrated.

In the Rigveda, one of Hinduism’s most ancient texts, Samara — the mother of dogs — assists Indra, the ruler of heaven, in retrieving stolen cattle.

Hindu tradition holds that a dog is the guardian and messenger of Yama, the lord and judge of the dead. A dog is also said to guard the gates of the afterlife.

At the close of the Mahabharata, the king of righteousness, Yudhishthira, refuses to enter heaven without his devoted dog. The dog is revealed to represent the concept of dharma, the path of righteousness.

During Tihar, each day is devoted to a honoring a different concept or entity: crows, dogs, cows, oxen, and fraternal relationships, respectively. On the second day, Kukur Tihar, all dogs are recognized, honored, and worshiped.

During Kukur Tihar, the mythological and real relationships between humans and dogs constitute the day’s major focus. A garland of flowers is draped around the neck of every dog; not only those with homes, but strays as well. 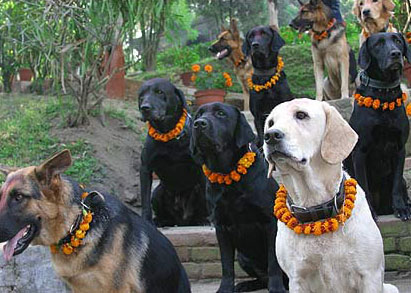 By devoting days during the festival of lights to crows, cows, dogs, oxen, and siblings, adherents acknowledge the deep connections between all living things.

How are you honouring your dogs, please SHARE your pics in the comments section.

Bhai Tika – The Practical Aspects of the Rituals We Follow

Some Diyas Away From Home