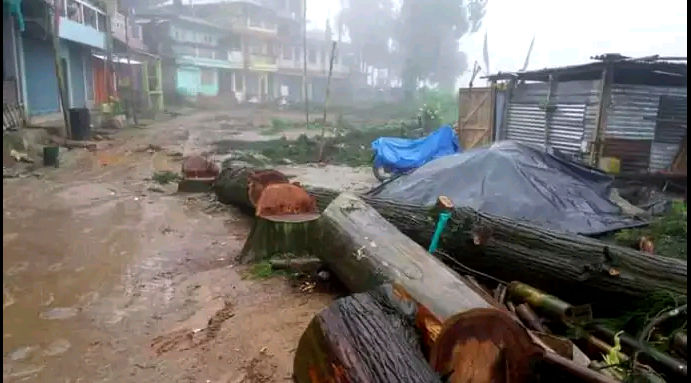 Development, but at what cost? Most in Mirik have started to wonder.

Following the election of a TMC lead board in Mirik municipality, and the Bengal appointed GTA Board of Administrators taking charge, Mirik is seeing expedited constructions around the lake.

While the locals are thankful that finally the lake revitalization project is underway, they are worried about rampant cutting down of old growth trees.

“As such politicians in Darjeeling have a history of cutting down trees in the name of development to fill in their pockets by selling off those trees. Earlier too old trees around the lakes have been cut and used to build houses for politicians and their cronies, we are worried the same may happen again,” said a concerned local.

Delhi erupted in protest as it became known that the government had planned to cut down 17000 trees. Same thing happened in Bangalore last year when the government in Karnataka had decided to chop down trees to build an over-bridge.

Tragically, no such concerns have been displayed by the people in our region.

In November of 2016 too, a series of beautifully lined trees were cut down at 9th mile, near Thurbo.

Back then too we had raised the alarm, and it is sad that we have to do the same once again.

Tourists visit Darjeeling not to see concrete structures, but they come to enjoy the natural beauty of our region. Of course new infrastructure are needed, but couldn’t it have been done without destroying whatever little greenery we have?

We hope that the environmentalists from Mirik, who have been very vocal and concerned in the past, will take a stand and demand to see who permitted these trees from being felled? Be the first to comment on "IN MIRIK: Beauty and the Development Beast"