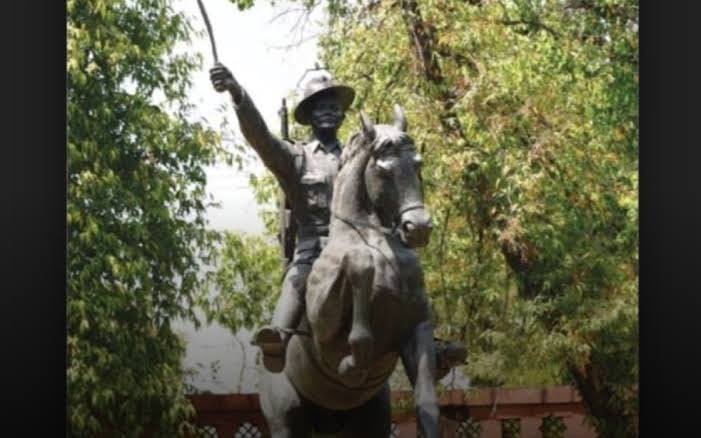 
Major Durga Malla was born on 1 July 1913 at village Doiwala in the Dehradun district of Uttaranchal. Durga Malla had drawn inspiration from the poet and social reformer Subedar-Major Bahadur Singh Baral and the musician and playwright Mitra Sen Thapa.

He was greatly inspired by the prominent Gandhian freedom fighters of Dehradun like Thakur Chandan Singh, Veer Khadagabahadur Singh Bisht, Pandit Ishwaranand Gorkha, and Amar Singh Thapa. The Dandi March of Mahatma Gandhi in 1930 to violate “salt rule” started generating patriotic sentiments in the heart of Durga Malla, motivating him to take part in the freedom struggle.

At the time of the Satyagraha movement, Durga Malla was only a student of the ninth class, but he was actively engaged in anti-British activities in his locality. He used to enter the Gorkha battalion area in the night with some of his friends to paste posters of the freedom struggle. Sometimes, he participated in processions with freedom fighters. Due to his anti-British activities, his family was frequently subjected to severe interrogation by the British Government.

Initially, Durga Malla was given the responsibility to mobilize volunteers for the Indian National Army from different Gorkha battalions. Later, by virtue of his patriotic feelings, his sense of duty towards his country, and his valor, he earned a promotion to the rank of Major.

When after the formation of the Provisional Azad Hind Government under the supreme command of Netaji Subhas Chandra Bose war was declared against the Allied Forces on 25 October 1943, soldiers of different branches of the Indian National Army were deployed on the fronts. Durga Malla was posted in the Intelligence Branch.

After his arrest, Durga Malla was kept in the prison at Red Fort, New Delhi as a prisoner of war. He was prosecuted by the military court under section 41 of the Indian Army Law and section 121 of the Indian Penal Code. He was given death sentence by the Court Martial, the court of trial before which he was tried at Red Fort.

That was the time when the imperialist British rulers were trying to suppress the Indian freedom struggle by all means. Therefore, before the death sentence was finally executed, the British authorities tried to coax Major Durga Malla into confessing the wrong and promised him a grant of remission if he could do so. But it was against the wishes of Veer Durga Malla whose only objective was to get the country free. He preferred to embrace the gallows rather than accepting the proposal of the British rulers. All persuasions having failed, Durga Malla’s wife Smt. Sharda Devi was brought before him to the prison cell as the last resort. British authorities were of the opinion that she would persuade her husband to apologize. But Major Malla yielded to no devices of the British authorities. On the contrary, he gave his wife his last words by saying. “Sharda, I am sacrificing my life for the freedom of my motherland. You need not be worried and distressed. Crores of Hindustanis will be with you after my death. The Sacrifice I am offering, shall not go in vain. India shall be free. I am confident, this is only a matter of time.”

Remembering Major Durga Malla on his Day of Martyrdom