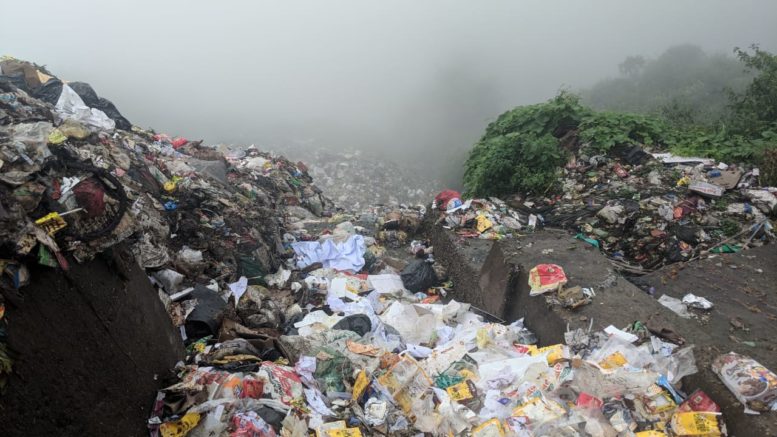 Plastic bags epitomise the use and throw culture that we have embraced, one that focuses on individual existence superseding our communal well-being. Among a long list of single-use plastic products that pile up in landfills and pollute our soil and water; plastic bags may be the most visible and vilified. It must have seen the most number of campaigns launched against it, a poster child of environmental movements, and yet it refuses to go away. The fallout of the rampant use of plastics is highly evident in our mountains, with choked drains and waterways leading to innumerable life-taking landslides, agricultural fields getting clogged and wildlife getting seriously impacted. Plastic litter is also widespread in the mountains and is impossible to retrieve.

Many state governments and local authorities have notified complete bans on plastic carry bags but almost all have failed in implementation. What does this inability to stop plastic bag use then say about the mountain states’ will and ability to tackle the plastic crisis?

On Plastic Bag Free Day, 3 July, we reflect on mountain states’ actions in responding to the plastic crisis. How effective have plastic bag bans been, what does it mean for the vision of single-use plastic eradication in the country, and the possible pathways to progress towards single-use plastic-free Himalaya?

The findings reveal that a very high 82% of respondents were aware of a plastic bag ban in their region with awareness higher in Himachal Pradesh, Nagaland, Sikkim, Tripura, and Mizoram. Yet, the responses highlighting the short-lived or partial effectiveness of the ban across all regions are not encouraging. Only 19% mentioned the high effectiveness of bans, 35% felt bans were not effective at all while 31% mentioned they were effective only for some time. Plastic bags are still in use in all types of markets, from grocery stores to local vegetable markets, to larger supermarket stores as enumerated by the responses.

Source * – Notification for banning, manufacture, use, sale, import, and handling of single-use products. (Parliamentary Response from MoEFCC – 12/2/21). Does not represent data from the district or local bodies
** Study on status of plastic bag bans, 2021

The Plastic Waste Management Rules 2016 has prescribed a minimum thickness for plastic bags with only 50 microns bags or more being allowed (now proposed to be increased to 120 microns). But the survey has revealed that thin plastic bags of less than 50 microns are still pervasive with 52% of respondents indicating this.

Increased use of non-woven polypropylene (PP) bags, the new avatar of plastic bags which looks like cloth were also reported in the survey. Sikkim and Tripura had a higher number indicating the use of the PP bags. Sikkim’s plastic bag ban is perhaps the oldest, coming into effect way back in 1998 with strict enforcement for some years. The ban came about in response to choked drains that resulted in landslides and deaths. However, the use of polypropylene bags flooding the market in recent years has made the ban ineffective, and the Sikkim Government is considering the inclusion of the non-woven pp bag under the plastic bag ban.

The black garbage bag has seen rapid escalation and indiscriminate use mainly among hotels and restaurants. The opaque nature of these bags is a deterrent to segregation of waste and biodegradables have poor chances of decomposing.

A new line of bags labeled as biodegradable, compostable, oxo-biodegradable, etc. is the latest addition to the plastic bag alternatives. The use of these types of plastic bags was represented in Arunachal Pradesh, Sikkim, Tripura, and J & K responses. Promoted as the ‘greener’ alternative, they are at times more problematic as some of these are just plastic with additives that accelerate the disintegration into microplastics. Compostable claims made are also false, as our landfills where these bags invariably end up, do not provide adequate conditions to biodegrade. CPCB’s stamp of authority on some of these bags is not helping the cause and there is a serious need to relook at such approvals.

Charging for plastic bags is shown to be a good deterrent and even though the rules are explicit on charge for use, 45% of respondents mentioned there were no charges.

Beyond bags and bans: The big picture

Bans on plastic bags have been ineffective in the Indian Himalayan Region and the survey reiterates that they are still rampantly used. A Toxics Link report of 2014 has stated that ‘Ban’ is just one part of the larger solution and in isolation is not as effective as it was thought to be.” Most bans have been promulgated without long-term vision and people’s participation, clarity in implementation procedures, and institutional capacities to vigorously and continuously monitor the ban.

The measure of the success of the ban lies in its execution and citizens need to hold their governments accountable. Institutions have to diligently work towards the implementation of the notifications with a long-term vision and action.

Globally, awareness of plastic pollution and specifically single-use plastics have gained great momentum with countries and cities actively working to turn the tide against the use and throw culture. The debate is no longer only around plastic bags, but much expanded, one that encompasses all single-use plastics and questions single-use.

Half of the plastic ever manufactured has been produced in the past 15 years and over 50% of plastic produced today goes into making single-use plastic (What a Waste 2018). The fossil fuel industry still plans to increase its plastic production by 40% over the next decade. Finite resources being designed into products that are used briefly and trashed instantaneously is simply not sustainable, least of all for a product that pollutes throughout its life cycle.

While the visible and immediate impacts of plastic pollution have become everyday conversations, a deeper crisis of microplastics formed by the breakdown of plastics is also unfolding. Found in the rain, water, soil, salt, and human placenta, micro-plastic is all-pervasive and a serious threat to human and planetary wellbeing.

A Reuse Revolution in the mountains

On August 15, 2019, Prime Minister Modi declared that India would be free from single-use plastics by 2022. This vision can be made possible only by bringing in a reuse revolution to replace all single-use plastics and open up avenues for local groups to engage through green skills and services.

There is a powerful message conveyed through the simple act of carrying your own reusable bag. It is a message that rejects the use and throws mindset while embracing a sustainable lifestyle choice of reuse. Plastic bag-free day is an opportune moment to talk about reuse and reflect on our lifestyles to take steps towards a plastic pollution-free planet. It is an action that changes the narrative in redress of the waste crisis by not producing waste in the first place.

But for change to happen, we need to do much much more. Multitudes of people need to embrace the reuse revolution for our individual actions to add up to a larger whole. People in positions of power and influence must lead by example for others to emulate.

Plastic pollution is a real crisis. This needs to be recognized by the Governments and Local Bodies through policy strengthening and implementation with the strong will, commitment, and urgency that this crisis demands.

Writes: Roshan Rai, Priyadarshinee Shrestha, Rajendra P Gurung. They are core members of the Zero Waste Himalaya platform that works on the issue of waste in the mountains. They are also active members of the Integrated Mountain Initiative.

SBI – The Bank of the Common Man

Why A Separate State Of Gorkhaland?