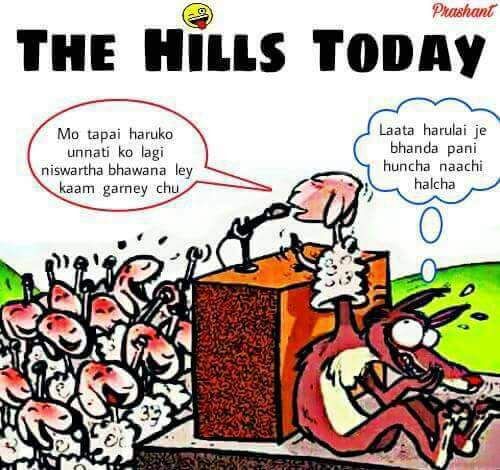 It is as if a magic spell is cast upon us that we submissively gather to witness a show that is totally dramatised and scripted. Just as the Lok Sabha election is approaching near, the magician performed his last trick to subdue the people, this time around it was full of high aggression, but guess by now we are all used to such trickery, none of us were scared.

The logical us understood clearly that the subtle overtone that was echoing under the tent, could not have been possible without the crowd, the same crowd who were even in Kharsang, the day before, and somewhere else in the following day and Kalimpong wasn’t different. Only the aggression changed with place.

A crowd, a mob, not reluctant to take bullets or die for the motherland and the same crowd who lives in the Hills as a tourist, complaining about the garbage, global warming, scooty, Brazil’s loss in the World cup and catering to the needs of the tourists and Nabnna, or just an Illusioned us.

The illusioned us doesn’t care of the magic, but what are we more concerned is the Magician, may be whatever he has in his bag, whether it be a pigeon or a gun, if he gives with conviction and love, we would take it gladly, the illusioned us understands the trick though. Even the magician knows, he cannot win our heart through some cheap tricks, that is known to us from time immemorial.

A magician should be calm, composed, focussed and should not deter from the plot, if he has any, and it is up to the viewers how they interpret it. There’s nothing you take for granted, you have to work on it.

No one is intimidated when you shout on top of your voice.

But when the magician tunes to a tune of a piper, the music that he plays is not even his, then how can he perform his trick well? Not even the music is known to anyone. Only a crow keeps on humming the same tune.

We are simple folk, crazy about food, education  and our people, we easily give away food to the hungry, home to the homeless, land to the landless, but we don’t give away our mother easily to others, we don’t share her love with anyone.

So when the spell will be over and the trance is gone, the viewers no doubt would ease unto their seats, you don’t need a spell for the illusioned. Their illusioned mind would again take them to another Magician.

Be the first to comment on "The Darjeeling Illusion"