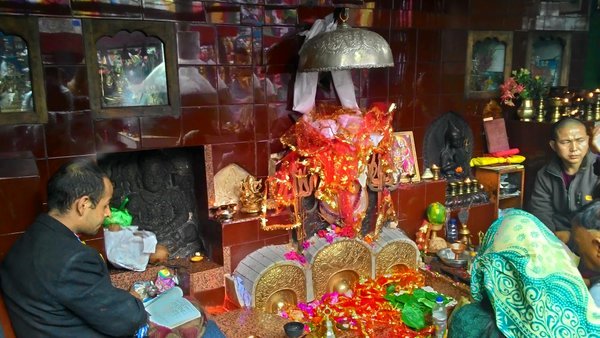 Only in Darjeeling: Buddhsit monk and Hindu Priest pray at the same temple

THENDUP NORBU Pradhan is a Hindu guy, with a Buddhist name, educated in a Christian missionary school, eats beef and is a Narendra Modi fan. He believes that Darjeeling is unique among all places, whether it be brewing world class tea or leading the agitation, the people here leave no stone unturned .

But what is  unique is his name. Those who have knowledge of the various hills communities asks him as how he has such an unusual name, to which he politely replies, “Come to Darjeeling, the melting potpourri of cultures that have fragrances mixed.”

Darjeeling, really is a modern cultural boiling pot with all kinds of cultures and traditions mixing well to accommodate everyone. This is a place where a Tibetan sells a Nepali outfits, and a Nepali sells Tibetan delicacies of momos and thukpas. Where a Bihari cuts cloth for a Bakkhu and a Muslim tailor stitch the attire.

Darjeeling, is fundamentally the most secular districts in the World, where Hindus celebrates Diwali along with the Christians and Muslims, while the Christmas songs are sung even in the homes of the Muslims and Hindus. And it will be difficult to find anyone during Eid, who hadn’t tasted the delicious Sewwaiya.

Happiness in Darjeeling is not searched for. It is vibrant and pulsating with life everywhere. One just need to feel it resonating with the cold breeze and sometimes it just seeps into you.

It is also one of the most socialist distircts in the World, where you can find  tea sellers in Chowrasta selling tea for the third generation and nobody knows where has he come from or where he goes. The streets of Darjeeling with its wide array of business and the wider mix of communities, that one probably not sons of the soil, that runs it shows they believe in equal opportunity to all.

But when Thendup Norbu Pradhan goes out of Darjeeling for education or work, people asks about his identity and authenticity, as if they have purchased a thing. They want to know how people are ok with such a mixed race and culture .

However, Thendup can be seen with a smile in a Thai hiarcut, Korean jeans, Chinese gadgets plugged into his ears whistling to an English song, Japanese manga rolled up in his back pocket and greeting everyone in a Gorkhali style, while some old school Russian tattoos on his right  arms seem undefining.

May be he feels he is too vulnerable a race who could be maligned by some powers or he is just a confused soul .

But tints be it black, white, or grey Thendup and all people of Darjeeling is as much an Indian, as questioned by many  due to his  ethnicity. In fact he considers himself as better Indian in the sense that in his land, dowry, female foeticide, gender bias, and other plagues of Indian society are non-existent.

But what attracts me of Thendup is that how stray dogs of Chowrasta flock towards him, their tail wagging, tongues out and a shine in their eyes. Last time I found all these dogs below the public toilet under the stable when one of the popular leader of the hills was delivering his speech. May be he wasn’t able to trick the quadruped as he had done to the general public of Darjeeling. But, Thendup comes with a good heart and belongingness that the dog knows very well that in spite of his mixed race he is a good soul and son of the Land.

SEE ALSO:  Learning From History - Gorkhaland Movement and We the People
Powered by Inline Related Posts

Nevertheless, Thendup nowadays stays away from the place that is close to his heart. For the warmth and compassion, he has for his hometown is growing cold, for unlike Thendup Norbu there are many in the Hills, who are searching their identity in various Development Boards, political parties or in the Football carnival.

Be the first to comment on "THENDUP NORBU PRADHAN: That Hindu guy with a Buddhist name"