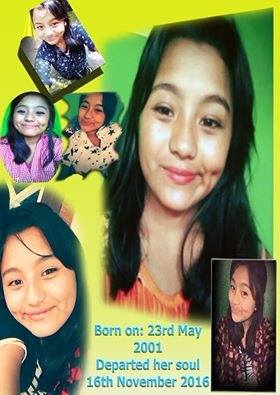 Almost a year to date that a 15-year-old teenager, a student of Class 7 Aakriti Tamang from Kurseong went missing, the prime accused in her rape and murder case walked free after getting bail from the Kolkata High Court. As the family prepares to remember their daughter on the day she went missing, I am left with numerous questions about our justice system, and I am not sure if I can trust them.

Recalling back the 15-year-old beautiful and innocent teenager – a class 7 student named Aakriti Tamang had gone missing on the 16th of November 2016, on her way back home from school. After days of intense search by the villagers, on 17th December’2016 her dead body was found in Ramitay Khola near Kabir village, 2kms away from her home. Her dead body had been meticulously and carefully covered with stones, by the perpetrators who may have wanted her to drown in the flowing river. By the time her body was found, 50% of her body had already decomposed.

Two days after the body was recovered, the Kurseong police had arrested three young men aged between 19-27. In fact, one of the accused men’s father took his own life after his son got arrested. As investigations continued, in February 2017 another middle-aged man (around 45 years old) was arrested in connection with the case.

Different NGO’s and Social Activists and Aakriti’s villagers came together to support the deceased’s family so that they could get justice for their beloved daughter’s untimely death. Tragically, the family has faced many ups and downs since then.

The case hearing was conducted in the Darjeeling Session Court where initially multiple pleas of appeal for bail for the accused were rejected by the District Sessions Court. However, in May 2017, the case was transferred to the Kurseong Additional Session Court (ASC), without any consent from the deceased’s family. Here too, bail appeals were put forth by the accused but were subsequently rejected by the court.

The family members of the accused then knocked the doors of Calcutta High Court for the bails and received it too.

The tragic irony is that after almost a year, on 10th Nov 2017 the accused were released on bail.

Therefore while Aakriti’s family were preparing to hold their daughter’s one-year funeral work on 12th November at her home, the accused walked out of jail.

The question that bothers me now as this – have Aakriti’s family received justice. When will this young girl who was brutally taken away from this earth ever get justice?

It was stated by the then SP and Kurseong SDPO that the case would have a custodial trail, but contrary to that, the accused are now released on bail. This is a cognizable case, meaning it is non-Bailable, one where even the POCSO ACT had been included. Given all this, how could the bails be possibly sanctioned? Could this be a clear case of misuse of laws on behalf of the perpetrators? I have heard of similar cases such as the “Gudia gang rape” and similar murder case in Shimla.

Will Akriti’s case also be like the many unsolved pending cases languishing on the desktops of some rotten government table collecting dust? Will she ever get justice? Will the perpetrators of this heinous crime ever be found? Will the family ever be able to cope with this loss?

These are a question that haunts me today…

*Phurba is a Social Right Activist from Darjeeling

We extend our heartfelt condolences to Aakriti’s family and we stand with them in their quest for justice.

Be the first to comment on "A Year On: Will Aakriti Ever Get Justice?"