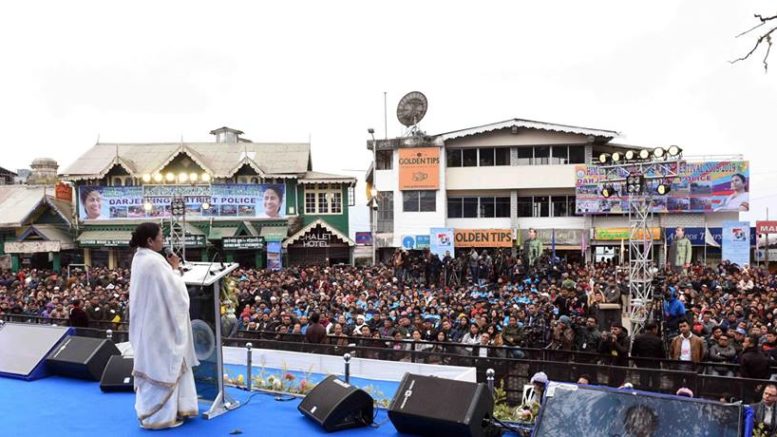 West Bengal Chief Minister Mamata Banerjee has announced that the elections to Gorkhaland Territorial Administration (GTA) will be held after the general elections in 2019.

Speaking at Chowrasta on the occasion of  Netaji Subash Chandra Bose’s birth anniversary yesterday, Mamata said that her government will try to explore a permanent solution to hill aspirations by reviewing the GTA accord. She also hinted that the GTA elections will be held after the Lok Sabha elections.

“Before the next GTA election, which will happen after the Lok Sabha polls, we will review the Darjeeling (GTA) Accord. We want to explore whether something more effective can be done” she said.

As per the MoU, 59 subjects were to be transferred to the GTA. However, despite the MoU and the GTA Act, the Mamata government had turned GTA as an implementing agency, rather than a governance body. This had caused rift between the hill politicians at the helm of GTA and the Bengal government. While in power, the then GTA chief Bimal Gurung complained of repeated interference by the Bengal government in running of the GTA, and ironically the current GTA Board of Administrator’s Chairman Binay Tamang had filed a case on behalf of the GTA against the Bengal government. At that time, he had claimed that non-transference of power to GTA was “impinging upon the fundamental rights of the Gorkha people living in the hill areas of the district of Darjeeling”. 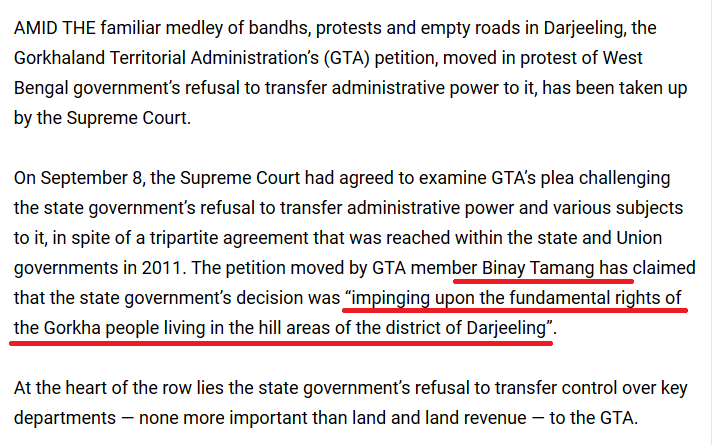 GTA: Binay Tamang had filed a case against Bengal Govt in SC [sourced from: Indian Express]

Yesterday, however Mamata said, “…We want a permanent solution so that development of the Hills is not hampered.”

Taking a dig at non-fulfillment of promises by BJP, Mamata said, “You all had asked for a Central University. Despite repeated assurances, the Central government did not give you one. The state government immediately initiated the process of starting the Darjeeling Hill University. They only make thousands of assurances at the time of elections and then run away. We don’t do that.”

Speaking on the non-inclusion of 11 Gorkha sub-communities in the Scheduled Tribe list, Banerjee stated: “We have already sent our endorsement to the Centre. However, it is not doing anything. If a new government comes to the Centre, we will definitely do the needful.”

SEE ALSO:  Emerging demographic shift in the Bengal Duars and national security concerns for India
Powered by Inline Related Posts
Irrespective of the general elections results, Mamata’s announcement to review the GTA Act holds significance, as indirectly its an admission to the current GTA set up being a failure.