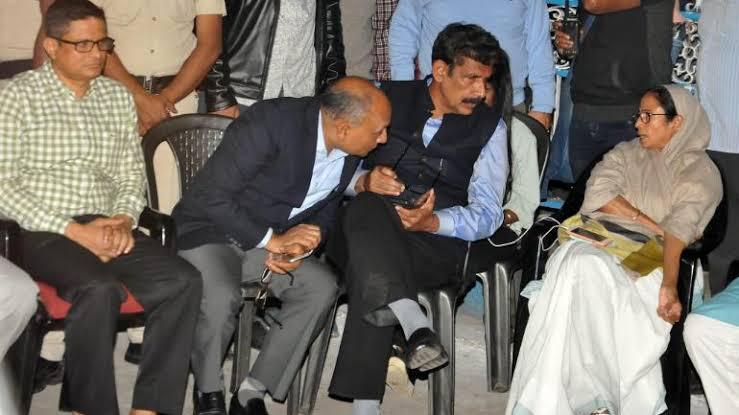 
Barely a day into his office, and hardly had the storm of internal turmoil that rocked the agency subsided, the new chief of country’s premier investigation agency CBI, Mr Rishi Kumar Shukla, has found himself in a sticky situation. CBI officers who were sent to question Kolkata Police Commissioner Rajeev Kumar in connection with Saradha and Rose Valley scam, were manhandled and detained by the West Bengal police.

The CBI team was in Kolkata to interrogate Kolkata Police Commissioner, Rajeev Sharma in connection with the investigation into Saradha chit fund scam, following an order issued by the Supreme Court in 2014.

Kolkata Police Commissioner, Rajeev Kumar, who the agency believes to be holding back important documents relating to the scam, had allegedly ignored the agency’s summons in the past. Protected by the Chief Minister of West Bengal Mamata Banerjee, the state Police prevented the CBI from carrying out any investigation, let alone question the Commissioner.

Immediately following the incidents, the Mamata Banerjee, joined by other TMC leaders announced a staged a dharna in front of Metro Central alleging high-handedness by the CBI under political pressure from the BJP-led Central Government.

Alleging attacks on the country’s constitution and federal structure by the BJP government, West Bengal CM Mamata Banerjee questioned the timing of the investigation right before the upcoming Lok Sabha elections. Many leaders, including the CM and ministers in the ruling West Bengal TMC-led government are alleged to have benefitted from the multi-crore Sharadha and Rose Valley scams.

Seizing the opportunity, opposition leaders of the recently formed Third-front (Mahagathbandhan) joined Mamata Banerjee’s call to save the constitution by calling for an indefinite strike against the central government. Rahul Gandhi of Congress announced his support for Mamata Banerjee, while the West Bengal unit of the Congress party organized massive protests against the CM. DMK’s Kanimozhi, RJD’s Tejaswi Pratap, who themselves are accused of involvement in other scams were among the first ones to join the dharna in Kolkata.

The nation watched the unfoldings of an unprecedented situation where a state government used all its political powers to stall an investigation by a central agency that was following the orders from the Supreme Court. The Kolkata Commissioner, Rajeev Sharma, the man in the center of the issue, was also seen attending the dharna called to protest his own interrogation. The world witnessed the institutional breakdown of the government’s machinery in the youngest democracy which stands on the principles of accepting differences, the fabled Unity in Diversity.

In November 2018, Andhra Pradesh and West Bengal had withdrawn the “general consent” provided to CBI citing reasons that they had lost faith in the agency against the backdrop of infighting within the CBI. The ‘consent’ allows CBI to investigate cases in any state of the country. A withdrawal of consent means that CBI officers will lose all official powers as soon as they enter the state unless the state government has allowed them. In the Indian federal structure, law and order is a state subject limited by jurisdiction; only a central agency like CBI can make investigations that lie beyond states.

Unlike NIA, which is governed by its own NIA Act, and has jurisdiction across the country, the CBI is governed by the Delhi Special Police Establishment Act that makes consent of a state government ory for conducting investigations in the state. However, the clause of consent of state is no hindrance to the investigation process of the CBI as highlighted by the Supreme Court judgment on the Kazi Lhendup Dorji vs CBI case 1994. The court observed that the state’s withdrawal should not be allowed stating that ‘the case should be allowed to reach its logical conclusion, notwithstanding the withdrawal of consent during the pendency of investigations.

Bureaucrats and politicians in Delhi and Kolkata are trying to outmanoeuvre each other in this legal quagmire, promising more drama as the elections draw closer.

The is little surprise that the Ministry of Human Affairs, the cadre controlling authority of IPS officers, has already asked the West Bengal government to take action against the Commissioner for violating the All India Services (Conduct), 1968 for sitting on dharna and hence participating in a political programme, which is unbecoming of a uniformed servant.

The Ripple Effects in Darjeeling

In parts of Darjeeling and Kalimpong districts, the GJM (Binoy faction) took out rallies against the centre’s excesses in Kolkata. In its press release, the party leader Binoy Tamang states “Its disheartening to see how central institutions are being hijacked only to discredit political opponents. This step is against the federal structure of India and does not bode well for the Centre-State relationship.”

Ironically, people of the Darjeeling Hills has been at the receiving end of the Saradha scam, with many rural people losing money in the scam. There have even been reports of the victims coming together to form unions to seek compensation for the victims. But, facts when not so convenient can easily be tossed away.

Now the Supreme Court has provided the Commissioner with an immunity against arrest buy also issued an order to the Commissioner to cooperate with the CBI. Only time will tell what would  be the fallout of the CBI- state police standoff, it’s political repercussions, and it’s bearing on the centre – state relationship.