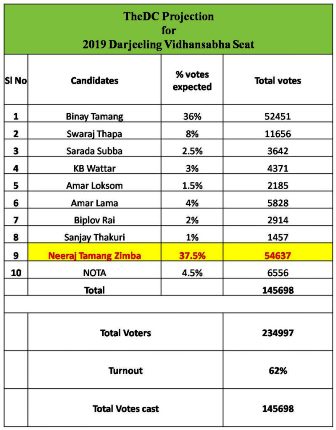 
Vidhan Sabha elections: Dear readers, as many of you are aware, we try to study the political trends, ground realities, political issues people’s concerns, and other factors and analyze how it will translate to votes. In a very unpredictable political environment, we have been able to successfully predict 2014 MP and 2016 MLA elections.

Elections in 2019 are a different ball game altogether, and the factors influencing the elections are some of the most extreme. We have done our best to analyze all the influencing factors and this is what we are projecting to happen tomorrow.

Please note that this is an ACADEMIC EXERCISE and not GOSPEL TRUTH… we do this to test our own understanding of the situation, and we are sharing the results so that we could hear from you all, what you make of our inferences.

Once again, we request our readers to see this as an ACADEMIC EXERCISE. Though we expect this analysis to hold, we concede that uncertainty is what makes politics so exciting. We will be humbled if proven right, but if we are proven wrong, we apologize in advance, and assure you we will learn from our mistakes and do our best to improve our analysis.

We thank everyone involved with this analysis and wish all the candidates good luck.