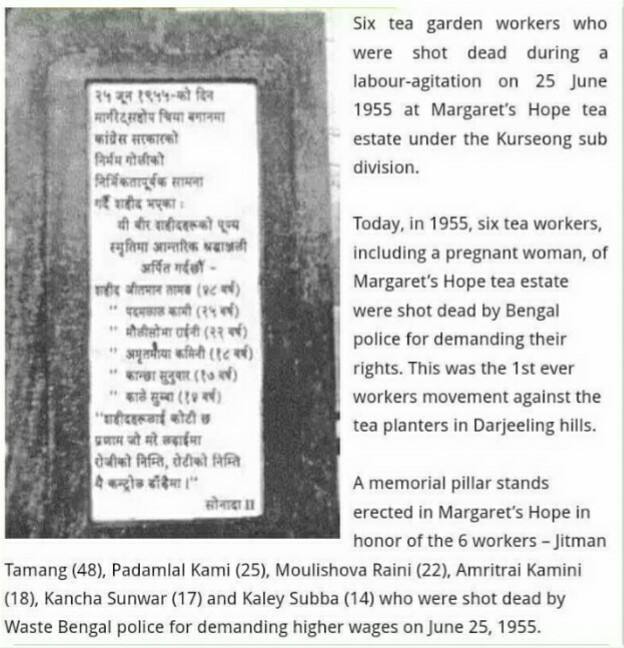 Eleven died in police firing at Naxalbari which gave an immortal stature in the history of the political movement in India, its name spread far and wide giving birth to the new ideology which became an important and trail shifting appetite for the upcoming working class movement in India. But there is another similar story in the tea gardens of the Darjeeling hills which remained neglected as the aspirations of the tea workers in the world of big tea market and capitalism. Tea loving Bengali “bhadra babu” visiting the hills during summer holidays never felt any urge to write a history of this revolt and sacrifice. The historic movement at Margaret’s Hope garden in 1955 saw the death of six workers in police firing where the leaders of the Communist party and Gorkha League played a vital role which ushered in a dramatic change in the labour rights in the garden as well as in the direction of communist movement in West Bengal.

Dr Abniranjan Talapatra, a Bengali doctor (better known as Talapatray Daktaar) was a member of Communist Party of India, he was better known as ‘the poor people’s doctor’ played a vital role in preparing the ground for the movement in Margaret’s Hope tea garden. At that time if any worker failed to reach the garden before the siren call he was subjected to punishments like making the workers return home without wage or sometimes thrashed with the canes by the manager and his men, workers were not allowed to wear shoes, wristwatch, full pants or use an umbrella as those were the part of British officers’ culture. During the rain, workers used a handmade umbrella made of leaves attached to a bamboo slices (choya), known as ‘ghumm’. Working in the short tea bushes wearing a half pant often caused abrasion and injury in the thighs of the workers. Iodine water basin was made near the tea factory under the initiative of Dr Talapatra, here the workers were compelled to wash their feet to protect them from infection and other skin diseases. In the evening he would visit the workers in their favelas, being a doctor he was not suspected by the management, besides treatment, he educated the workers about their rights and organised them, urged them to unite, to fight against the oppression of the management. The oppressed workers also easily understood him. One day Harkaman Dewan, a worker, wanted to see the reading in the weighing machine, ended up in getting a punch in the face by the manager which was quite common in tea gardens of the Darjeeling hills. There was a system of “hattabahar” by which any worker who is found guilty or against the wish of the tea management can be thrown out of the garden and this jobless fellow would never find any job in any garden, either in the hills or in the Dooars. Despite the country being free for nearly a decade, the garden workers were still in the reminiscence of the colonial rule.

When the workers ‘organisation gained strength, in 1955 the Shramik Sangha of AIGL and the Mazdoor Union of CPI, on 8th May 1955 conducted a meeting with the Planters and the Government and submitted 14 points Charter of Demand. Some of the important points of the demands were:-

It is to be noted that these demands were already made in the manifesto during the election of Ratanlal Brahmin in 1946. Mr Brahmin, Dr Talapatra and Sushil Chatterjee, another communist leader from Nadia made a notable contribution despite fierce opposition from the authorities. Dr Talapatra organised workers’ meeting at his own bungalow provided by the garden under the pretext of his son’s (chhewar) hair cutting/shaving ceremony of a child at the age of three leading to the formation of workers’ union. Meetings were even conducted in the forest at night. Unfortunately, Talapatra was found to be a communist ideologue and a person behind the workers’ organization, so as a result of it, he was terminated from his service along with his compounder and bungalow workers and sent out of Margaret’s Hope tea garden under the system of Hattabahar. The reason was to safeguard the garden from communist ideology. But it was already too late; workers were already conscious of their rights and were ready to fight for it. After he was thrown out of the garden, the movement and the organisation was led by the local leaders who used to work with him. At the ground level, the movement was carried out by Harilal Sardar along with Samaney Sardar, Ramjit Rai, Saila Tamang etc. Purnay Subba mentioned about Sardar by saying- “Harilal Sardar was from Dokan Dara, Hangkhim (Rai) in caste and had control over the workers of the entire Lower division of the Margaret‟s Hope Tea Estate. During those days he used to ride a horse and wore full pants and shoes which were prohibited to the workers. People used to greet and wish him with respect. He was hated by the managers and the staffs who were in favour of the managers as he was the leader of the Union. During those days everybody used to fear managers but he was the only one who can talk to the managers face to face.” Nanda Hangkhim, an eminent Nepali literati and dramatist was the third son of Harilal Sardar, had written a drama and made a movie based on the incident of 1955 (Movie’s name “Unais Sau Pachpan Saal”) where he had shown the movement in a melodramatic way.

A plantation strike was called by CPI and Gorkha league, in a collective way by the 22nd of June 1955 after the failure of the series of meetings with the planters and government. Rather listening to the workers’ call government started arresting labour leaders forcing many activists to go underground. On 25th June 1955 workers from adjoining tea gardens of Munda, Dhajae, Ringtong, Balasun, Maharani, etc. arrived at Margaret’s Hope, it was heard in a nearby garden of Dilaram, the workers were forcefully compelled to work even during the days of the strike. As in Beltaar, police had been stationed to look at the worker’s movement and similarly in the Margaret’s Hope also for the same purpose. The mass moved towards Beltaar/Dilaram where they were barricaded by the police in Control Dara which led to the dispute between the workers and the police forces. At the insistence of Auckland (Okhlen Sahib), a manager of Margaret’s Hope garden, police open fire upon the workers’ gathering leading to the death of six workers, among them a young lady, Moulisova Rai was pregnant. Soon, hundreds of workers were arrested on that very day. Famous Nepali poet Agamsingh Giri was arrested for being sympathetic to the workers’ cause. But these atrocities caused a general furor and further ignited the fire of rage, workers from all the gardens all over the hills, Tarai and Dooars, the general public in urban areas like in Darjeeling, Kurseong etc. showed their solidarity. Communist sympathies now put the authorities in a tight spot. On 27th June 1955, the government agreed to all the demands including bonus, maternity leave and scrapping the hattabahar system.

Though time flied from 1955 to 2018 very swiftly the wage of the workers similarly rose very sluggishly, till today tea garden workers are deprived of their rightful wages, they get a measly ₹150. The red party that pedalled dreams among the tea workers had forsaken them when it came to the power. An old worker named Kushlal Subba reported, that he was only 16 or 17 years old when Mr Jyoti Basu visited the garden after the workers’ victory, he carried the leader on his back to every meeting as the city dweller leader couldn’t walk in the hills. The old worker claimed that he (Mr Basu) did nothing for the tea plantation workers when he came to power.

Yet the 1955 movement is a watershed in the life and rights of tea plantation workers. They first tasted victory through organized movement. The movement of 1955 saw the massive participation of the tea labourers in the trade unionism and its movement. The movement being the first organised movement ever since the birth of tea plantations in Bengal have great importance in the history of the struggle of the working class. But after this movement, the tea workers movement suddenly vanished like volatile element in the air from the politics of the Darjeeling tea gardens. After this movement of 1955, no other such mass movement in the trade unionism can be neither recalled nor seen.