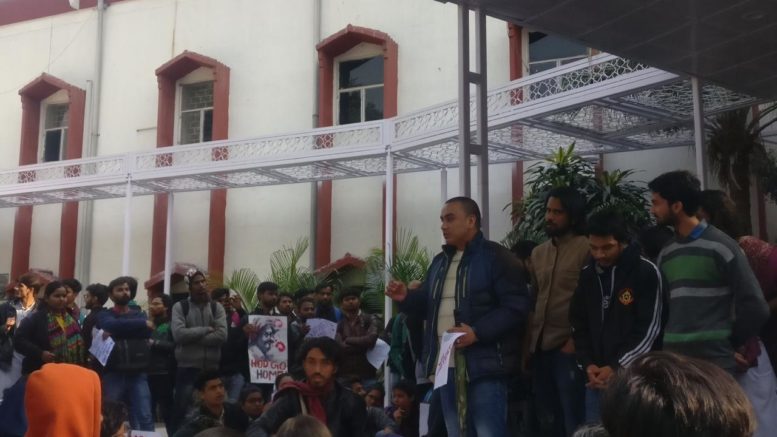 
The protest against alleged unfair means of assessment, favouritism and sexist comments by Applied Arts HOD, Hafeez Ahmed in the campus took a violent turn as the protestors claim to have been “thrashed by a group of students close to the HOD”. Over 150 students were protesting  the campus when the rival group of students allegedly manhandled them.
On the other hand, the professor also alleged that he was held captive inside his studio by students for five hours. He stated that students tried to thrash him when he tried to step out and university security had to intervene.

JMI public relations officer (PRO), Ahmed Azeem said, “Students are permitted to protest near gate 7 but they moved the protest to the department of arts, that is when a group of students thrashed the ones on the protest. The administration has suspended three students in this regard. The charge of  applied arts has been handed over to the dean of arts. She is a woman and will also be heading the inquiry against Professor Ahmed, who has been sent on leave.”

Professor Hafeez Ahmed refused all the allegations against him and said students are motivated. “I have been working in the university for 25 years now but no such complaints were raised against me earlier. If students had an issue they should have moved the right authorities. They protested outside my studio and held me captive for five hours, this is an attempt to character assassinate me,” said Ahmed.

Annual Get Together of Delhi Police Pariwar by Darjeeling Boys 2018