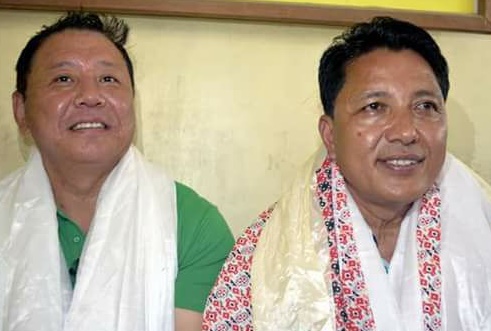 File pic via Kalimpong News: Sonam Yakha (left) and Suvo Pradhan (right) after being elected the Municipality Chairman and Vice Chairman in May, 2017

Kalimpong municipality Chairman Shri. Suva Pradhan yesterday asserted his confidence in retaining the Board by defeating the proposed no-confidence motion.

On Saturday, rebel leader Anit Thapa had informed the press that their faction had the support of 15 elected Municipal councillors, which included two from Jan Andolan Party. Thapa had stated that these 15 councillors will bring in a no-confidence motion on November 30th, 2017 against the board led by Mr. Suva Pradhan.

“I have 100 per cent chances of defeating the no-confidence motion. There are last minute strategies that I cannot spill out to the media, but I am confident,” Pradhan told the press.

Tashi Sherpa, JAP spokesperson, said: “We are yet to exercise our minds on the no-confidence motion. As and when time comes, we will discuss and decide. Whatever decision our party takes, it will be in the interest of the people.”

The JAP denied defection of its councillors to the Binay-Anit lobby and said they remain committed to the party and its ideals. “The are rumours about defection of our two councillors because of their meeting with Thapa on Saturday.

Mr. Sonam Yakha the present Vice Chairman of Kalimpong Municipality has also switched sides to the AT-BT group, and is likely to be projected as the Chairman if the no-confidence motion goes through.

Open Letter to the Chief Minister of West Bengal