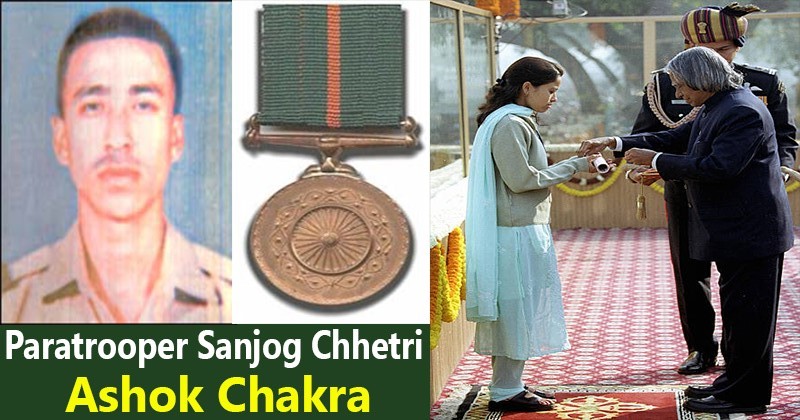 In 2003, Sanjog Chhetri of 9 PARA (Special Forces) was awarded an ASHOKA CHAKRA posthomously. Yet, Sikkim his home state has refused to acknowledge him, and honour his sacrifices.

It is, indeed, deplorable that the reason, purportedly, was that his Mother was Sikkimese but she married a man who was a non- Sikkimese. This was despite the fact that Sanjog was born in Sikkim, studied for and completed his classes 10+2 in Namchi in Sikkim, joined The Parachute Regiment Special Forces, and proved with his abilities, gallantry and supreme sacrifice that he was amongst the bravest of the brave and earned Ashoka Chakra, the highest gallantry award in peace time hostilities against hostiles in an undeclared war, in this case a proxy war.

Ashoka Chakra carries a justified financial reward from State Govt, presently Rs 50,00,000 cash and a monthly financial pension which should have been received by his Sister, the next of kin (NOK).

Benefits received from Army and the Central Govt to the NOK have been disbursed but never reached his Sister, Sangeeta, since married, and are said to have been misappronriated by an Uncle, reportedly a Sikkim police prosecutor, with whom the bereaved brother and sister lived while studying in the Namchi school.

Lamentable and the most despicable is the stance of the State Govt which refused to give any of the rewards that Sangeeta should have received because they applied Art 371(f) to uphold an old Rule, NOT A LAW, which will not stand in the light of the fundamental right to equality. The said Rule debars a husband or offspring borne out of a Union between a Sikkimese woman and a non-Sikimese man from inheriting the former’s property in violation of the cosntitutional fundamental right of equality, a basic feature of our Constitution, which can not be superseded by any amendment to the Constitution since it will tamper with the basic structure of the Indian Constitution.

The case was lost in sad bureaucratese – the babus, whether of origin from the states other than Sikkim or of Sikkimese origin, seem to consider that the late BRAVE MAN, Sanjog Chhetri, or his next of kin (NOK), are not entitled to any awards of the State purportedly because of Art 371(f).

I know other states – they have put up statues of Ashok Chakra winners at prominent places, given such soldiers, their NOK and their children benefits that accrue out of such great service to and sacrifice for our motherland India.

When I talked of the apathy of the bureaucracy and political leadership in the case, a responsible and respectable minister in Haryana offered to put up a statue of Sanjog Chhetri in that State.

I took up a case with the local politicians who only made some cluck cluck noices but ignored follow up corrective action. Strange, that the same State should award Sikkim Ratna to the movie actress, Mala Sinha, who has no connection to Sikkim. Financial reward/largesse have been forthcoming to many other non Sikkimese – sports persons, singers etc; one wonders why this apathetic attitude in Sikkim to soldier, an Ashok Chakra winner !!

IN MANY WAYS WOMEN CONTINUE TO REMAIN LESS EQUAL THAN MEN AND DISCRIMINATED AGAINST IN MY SIKKIM. Numerous NOK of armed forces, Assam Rifles and Central Police Organisation personnel  are also similarly denied their due in Sikkim.

Its high-time that the government of Sikkim stop discriminating brave-hearts, just because their father was a non-Sikkimese. It puts a blot on the good name of our state and pricks the conscience of all the good citizens here.

SEE ALSO:  Why Sikkim has been Able to Maintain Zero COVID19 Cases Till Date
Powered by Inline Related Posts

Paratrooper Sanjog Chhetri was born on 26 June 1982 in Bomtaal village in Southern Sikkim. At a very young Ptr Chhetri lost his father and he and his sister Sangeeta were brought up by his uncle. Ptr Chhetri was very brave since his childhood and always wanted to serve in the Armed Forces. He joined the Army on 31 March 2001 at the age of 19 years and was recruited into the Parachute Regiment, a regiment known for its gallant soldiers and daredevil operations. Later he was selected for the Special Forces and joined 9 Para(SF), the elite force of the Parachute Regiment.

During 2003, Ptr Sanjog Chhetri’s unit was deployed in J & K and was involved in counter insurgency operations on a regular basis. On 22nd April 2003, information was received from the intelligence sources about the presence of some hard core terrorists in Hill Kaka area. After analyzing the available inputs an operation was planned by 9 Para(SF) to flush out the terrorists. An assault team comprising 20 commandos was selected for the operation which was code named “Op Sarp Vinaash”.  Ptr Sanjog Chhetri was one of commandos selected for the critical operation.

The assault team swung into action as per the plan and cordoned off the suspected area. However as the commandos moved forward and approached the terrorists hideout, they were fired at by the terrorists. A fierce gun battle ensued thereafter with heavy exchange of fire by automatic weapons. The heavily armed terrorists were firing from safe places and posing serious threat to the troops out in the open. At one point Ptr Sanjog Chhetri realized that his comrades were in direct line of fire and were in danger. He, in a rare display of raw courage crawled a distance of nearly 100 yards and attacked the terrorists by firing from close range and killed one terrorist.

SEE ALSO:  Gorkha Dream in Limbo: From Ghising to Modi – What Next?
Powered by Inline Related Posts

Paratrooper Sanjog Chhetri is survived by his sister Sangeeta.

The citation of Ashoka Chakra awarded to him reads:

On 22 April 2003, he led a team of 20 commandos in carrying out operations in the terrorist location at Hill Kaka in Jammu and Kashmir. The commandos approached the terrorist hideout and drew heavy automatic fire. Sensing danger for his fellow commandos, Ptr Sanjog Chhetri assaulted the mountain hideout after crawling 100 yards and killed one terrorist. Despite the gunshot wounds he sustained and the profuse bleeding, Ptr Chhetri killed one more terrorist and offered an opportunity for his team to engage the remaining terrorists effectively. The commando team killed all the remaining terrorists. Ptr Chhetri later succumbed to his injuries. For his bravery, he was posthumously awarded the Ashoka Chakra, the highest peace time military decoration in India.

Be the first to comment on "SHAME: Sikkim Yet to Acknowledge and Honour Ashoka Chakra Awardee – Sanjog Chhetri"